When last I wrote: I also peed. A little, tiny bit, but still. Pee. So I kept running, until…

And so as I rounded the corner and began running in earnest, I realized just how raspy my throat was and a sense of panic almost set in as I wondered how long until I go water. I faltered, my steps slowed and I lunge walked, not wanting to stop, but also not wanting to push too hard too soon. 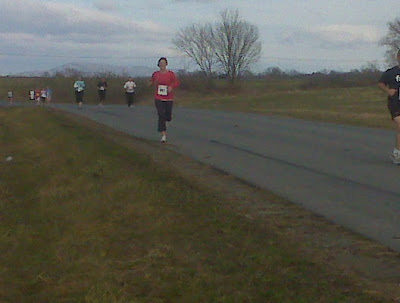 I lifted my head and saw a car and immediately thought: Water! But it was even better: 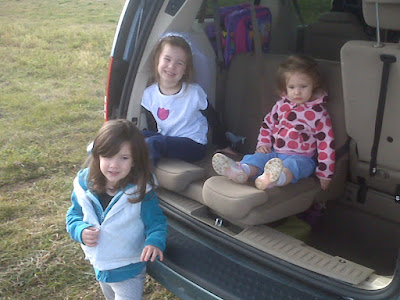 Sean and the girls were camped out with water and hugs. I ran to them, grabbed water and knelt down to hug each of them. Fin didn’t want me to go on, or if I was going to, she wanted to come. Other runners giggled and called out hello as I ushered her back to the van, blew kisses and kept running.

Not sure if Ave was crossing her fingers hoping I’d make it or what. 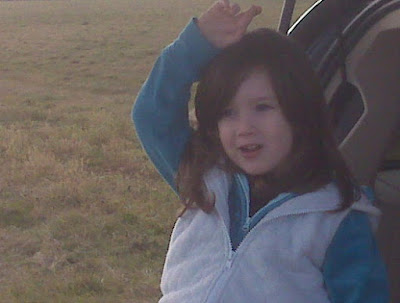 My gait was longer and my chest was lighter as I ran, the girls’ calls of “Go mama,” and “Run, win the race” shepherded me on and I kept a respectable pace as I forged through the next mile and a half of curves and high-traffic roads (read: Lot’s of people watching us run from their cars, porches and gas pumps.)

Sean had hooked me up with his iPhone and some magic Nike product or another which was letting me know my pace and how far I’d gone. Simple math kept me knowing how far I had to go, which was nice. The spread was pretty even with the head of the pack keeping consistent with their insane 6 minute-mileness and those making up the caboose doing about a 14 minute mile. I kept myself right in the middle and honestly, just tried not to vomit or have pee run visibly down my leg.

At one point at about mile 5 I said to Tara, “So, I think I can officially say that I have peed,” to which she replied very unimpressed, “It isn’t a good race unless you pee.” It was at that precise moment when I knew that I loved her. 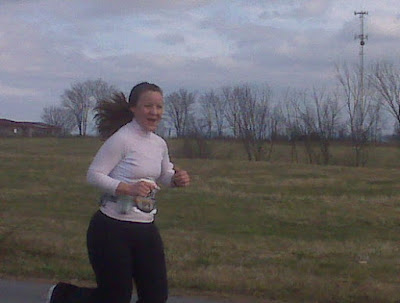 The iPhone stopped tracking me 41 minutes into the run, which meant that for 18 minutes I was on my own, off the grid so to speak. It was agony. Lesson: use the conveniences and luxury technology affords you, you still sweat, but you don’t fear.

We ran through a mile and a half of neighborhood, I remember thinking how odd it must be to be going about your day and seeing this motley group of running nuts zip their way through. As the checkpoints with cheerful teenagers calling out “Good job” grew closer together I knew I was nearly done. I started running faster and I smiled. I had started the race torn between thinking I could and knowing I couldn’t.

The front of the school was packed with people. I dug my feet in more with each step as early-finishers cheered me on. The final stretch was a curved driveway right in front and as I kicked to the finish I thought of nothing but doing. 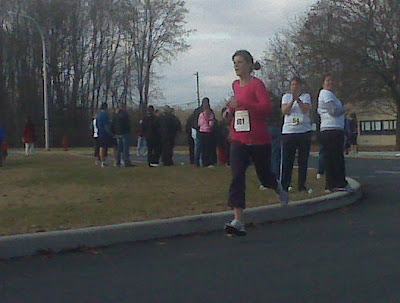 Completing a 10 k race.
Making it up that f*cking hill.
Being brave even though I was scared.
My girls watching me do it.

Sean met me at the end and smiled as FInley leapt into my arms. I held her tight as the big girls danced around me singing, “You won, you won the race!” My legs could barely hold me, my arms were weak, my pants were wet and I couldn’t remember ever having felt so exquisitely happy. 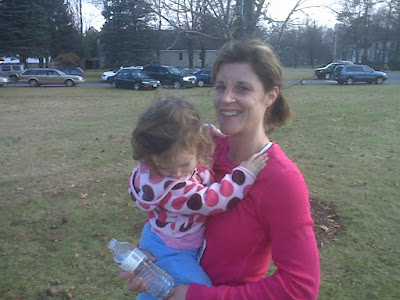 Go do something for you.
I want you to have that too.
Come back and tell me about it, I know you can do it.