Once upon a time I made a Halloween costume for Briar. I do not know how to sew, I cannot read a pattern, I don’t even flirt with trying a Martha Stewart project. Yet some part of me felt like I needed, at least once, to make a costume by my own hand. There were pinpricks and muttered profanities, supportive suggestions that maybe it was unnecessary from Sean and then, it was done. 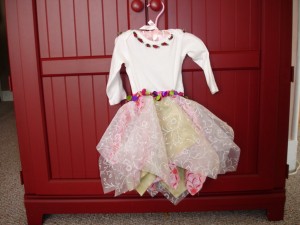 It was fanciful and twinkly with pastels and jewel tones, cotton and tulle. Looking back I realize it was very much like Briar. We joke that she is girlie and 100% Disney princess obsessed, but that is selling her short. She is, in my opinion, everything a princess should be—nurturer, ham, diva, scholar, fixer, doer, believer.  She sings at rest, whispers to plants, defends the weak, champions kindness, and glows from the inside out.

This year we ordered a costume after poring over 3 different site for hours. She picked this: 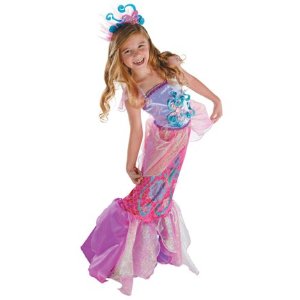 When it came we ripped it from its plastic casing and put it on her. She admired it for a moment then looked up at me with sad eyes and said, “Oh, mama, it itches me everywhere.” I ran and found tights and a long sleeved shirt. We took the costume off, outfitted her with the itch barrier for underneath and put it back on. She wiggled a bit, looked at me again, this time her blue eyes filled with tears, “I’m sorry mama, it just hurts me.” I shushed her and said it was ok, promised I’d send it back and we’d find something else.

A few days later, the idea of replacing the costume having slipped off my radar several times, Briar and Avery called me into the living room, “C’mere, mom!” I left the laundry room and walked into see them holding their arms out like showroom models and saying, “See, we’ve put together a costume for Briar!” Briar’s face beamed as she showed me the dress-up dress from 2 years ago, the crown she wore when she was 3 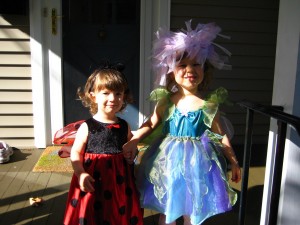 and a pair of tattered butterfly wings from her pre-k costume. 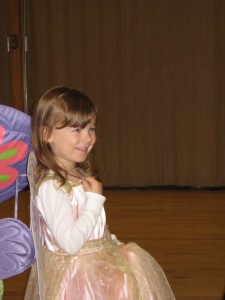 “See, mama, ya don’t gotta buy me anything, because I put it together myself.”

I was so stunned, somehow I had underestimated Briar, subconsciously assumed that she would not accept anything less than a store-bought replacement for her costume. I oohed and ahed and told her how proud I was. I said I’d buy some ribbon and we’d add some things to the crown. I walked away as they continued buzzing around the room talking about Halloween. As life would have it, trips to the store were curtailed by sick days and double booked afternoons. Then when I finally made it out, I banked on being able to find the ribbons at the 1 store I had time to go to. Target missed.

Then the note came home from school saying that kids could wear their costumes. I had done nothing. The dress Briar had found for herself was too small, ditto the crown. It wasn’t ok. While Finley and Avery slept I dug through every dress up box and crafting bin we have to come up with materials. I had no plan, but a ton of working mom guilt. Boeing should look into that because I swear you could power rockets on the motivation of a mom compensating for a perceived failure. 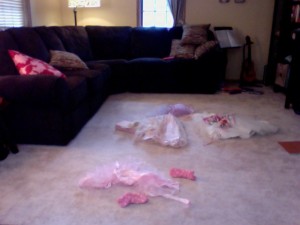 I bent three needles, ripped through two tutus, cut, embellished and married 18 ribbons and took care to face every seam with more ribbon to eliminate the itch factor and after 2 hours, called it a day. 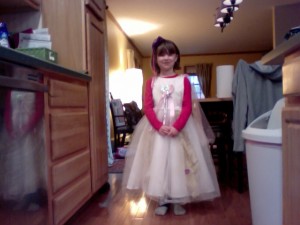 She humbled me with her delight, honored me with her reverence and made me weep as she proved once again that she is so much more than a princess.

Briar, there isn’t a jewel or a costume that could ever be as fancy, magical or amazing as you.