Yesterday I changed my approach. Fridays are always a work-from-home day, which, loosely translated means failing-as-an-activities-director and also ill-equipped-to-accomplish-much-beyond-frantic-email-replies. I’d worked all week to cross things off my list, not so much from anticipation of a different Friday as it was a fatigue from feeling inadequate. I’d come to expect the ping of new emails and the “Amanda, line 2” announcements to be bad things; dissatisfied clients, cold-caller requesting things I cannot give. I was dodging things that never materialized, which is exhausting because when they don’t arrive you don’t stop worrying, in fact you worry more.

When I’m not fretting over work I am fielding requests from the girls:

Can we go swimming?

Can we go bowling?

I have a play date.

Can I take dance classes?

When can we do yoga at the Y again?

Thursday I found out that a stomach bug was dashing through Avery’s school, so I let her know she’d be staying home. I worked with Briar on her Earth Day project- makes something from recycled items (we made a sail boat using a Lucky shoe box, a Hillshire Farm lunch meat container, hard plastic wrap from a Disney Fairies hair package, an outlet cover, keyring loops and string. No photo, but folks, it rocked!). The fridge was a wasteland of uneaten left-overs, wilted greens and nearly empty containers. The cabinets were littered with stale snacks and unopened boxes of things I’d tried to incorporate into lunches and snacks to spectacular failure. I won’t even mention the laundry other than to say: holy skunked load and blasted reproducing matchless socks.

Thursday night the only things left to do required a response from someone else, so I put them on a soft hold and prepared to spend Friday in a recovery of sorts. Briar scooted off to school with her S.S. Spartan in hand, while the little girls and I headed to the store. My gas tank was past E, I had butterflies thinking how the day might take nosedive into total failure if we ran out of gas. I drove with crinkly eyes and hopeful heart. Two and half hour later, the groceries were put away in organized cabinets and a scoured fridge, the girls were napping and the panicky weight that had been pressing on my chest was gone, though I was peeking around corners imagining its return.

Two emails came through that allowed me to officially finish my work. It was just as I finished that the girls came down. Here’s where my euphoria braids itself into simple accomplishments. They wanted lunch, so many things would have been easier, but they wanted grilled cheese. I made the sandwiches and watched as they disappeared from the plates faster than I made them. We went outside and played with the chalk we’d bought at the store. I prompted them for things to draw; never once did they suggest something I couldn’t draw. We hula-hooped, raked, romped and laughed. We basked in the sun and in the worry-free time.

I did all this because I needed it and they needed it.

What I realized was that it shouldn’t wait until then. 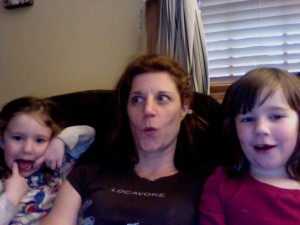 Bad things can happen at anytime, but so can good things. And really, the powerlessness we feel is so foolish, because at the end of the day, we’re steering the happiness. 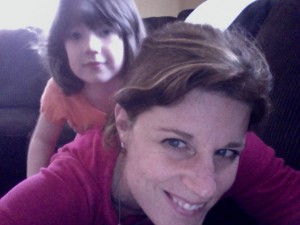 I say we take the wheel more often.