I knew it would have to happen eventually. We flirted with it in principle, then it became more pressing, something that had to move beyond concept and actually take place.

I am, of course, talking about cutting Finley’s hair.

She turned 3 in late April and has never had a haircut.

How do you touch this? 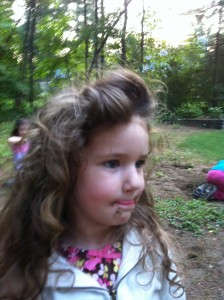 Finally she turned to me and said, “Mom, can we go to the mall and get my haircut?” My jaw dropped and then I spied her sisters. I realized that they knew I would do this and that conveniently located at the mall is a bounce house dungeon, I mean palace.

“Of course we can.” I squeaked. You see her hair, though I worship every corkscrew and wisp, gets stuck in her armpits. During meals it catches all manner of condiment (and, full disclosure, main course). She sits still for braids, but she often cries at the detangling process.

We brokered a deal to hit the bounce house after haircuts, little did I know it would turn into a full-blown, “Give me the works” deal with each girl getting her hair not just cut, but shampooed and blown dry (B didn’t get her hair dried, but I’ll explain that). Avery went first and while she waited, Finley allowed me to snap a before picture.

The salon started to fill up just as the girls began to get a little rowdy. I got nervous realizing that the hairdressers had served us to fill dead-time and that we had officially entered the time of scheduled appointments. I tried to keep the girls calm, but a squeaky, slippery floor, the multiple piercings of one of the women, the novelty of the whole experience and an audience just fueled their shenanigans. I began to sweat, so much so that the front of my shirt started to spot.

Then the mother of the 7 year old waiting for a haircut started to get annoyed. They were 15 minutes past their appointment. She had every right to be livid, I was halfway there on her behalf, suffering with how slow it seemed to be going and regretting that we couldn’t just enjoy it. They finished Avery’s cut, then Finley’s and were about to style Briar’s when I subtly pssted at one of the hairdressers. I passed her a note at the counter, “Please put the charge for the next little girl’s cut on my bill.” As she read it I cajoled Briar into leaving without a blow dry so we could get to the bounce house. She happily complied.

I hoped that the wouldn’t be too annoyed as we left. Finley curtsied and smiled at everyone. I tried not to cry.

I hadn’t been attached to her hair, but I had been clinging to the baby. Knowing that the ends of her hair were to some degree the same hairs I kissed on her head that first moment they lay her on my chest, that her sisters had stroked, that we’d all twirled, had somehow meant we weren’t done. We still had our baby Fin. I know that anything that was there before the cut is still there, but an undeniable shift transpired. Things that weren’t there at the surface before the cut, were plain to see after.

She is magnificent and bold, fearless and wondrous. Still my Fin, but somehow more her own Fin than before. Or Finley, or Eff, or whatever she may choose to be called as she gets older… 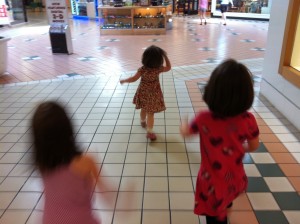 …further along on that horizon that already taunts me with the allure I know it holds.