As always seems to be the case, the milestone snuck up on me, I didn’t comprehend that we were slipping through a window in time.

I woke to the hissing that is little girls attempting to whisper. “Here, right heeeer. Psst, Ave, like this you can do it.” Followed by rustling, clanging and thundering tiptoes. “Briar? Here, for youuuuuuuu. A shirt!” I tried to roll over and sleep it away, but a quick bit of arithmetic prompted me to lurch from bed so that I could deal with two, rather than try to sleep away three.

I wrangled on some clothes as the cool air had snuck through the upstairs and made my tank top laughable as cover. Before I’d set foot in the hallway they were upon me. They coiled around my, legs and torso all hands and breathless declarations and questions.

“I’m wearing this shirt, but can I have another under it in case I get hot?”

“I want my hair a certain way. Your way mom, will you do it your way please. Oh, please?!”

“Do you know where the flashlight is, I want to find a headband.”

“I am taking this and this in my backpack. Do teachers like ribbons or do you think they like snacks?”

By the time I got downstairs and put on the water for coffee, I was inspired, if not completely in synch with the emotional enormity the day would bring. “You girls want pancakes?” They chirped, I beamed, and whole wheat pancakes and eggs were had by all. Then it was on to packing the backpacks and lunches, choosing shoes for the puddley weather and prepping to leave.

The bus stop was sweet and without drama. Avery has been ready for this day for a while now, Briar showed no bossiness and so it was that they hopped about in similar jean jackets and cooed at Fin as they waited for the bus. Watching that big yellow thing pull away, our girls sitting endless rows apart, I felt none of the relief I’d begun to anticipate after a long summer, nor did I feel achey tugs at my heart…those came ten minutes later.

We raced to the bus, like sentimental storm chasers, Sean’s words from last year echoed in my head, and I kept my sudden tears at bay. The cacophony of new starts overwhelmed me. Not the noise, not the energy, it was the unmistakable crank of a wheel I know will build a momentum for which I have no gauge. This ascent is meteoric and hard earned. Avery came down off the bus, beamed, and then came to me for a hug, but I knew in my core it was done for me, so for her I giggled and cheered her on. Briar’s high five and wink shooed away the urge to sob, and Fin’s demands for attention brought me back to now.

A second grader and a kindergartener. 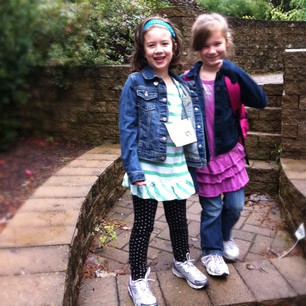 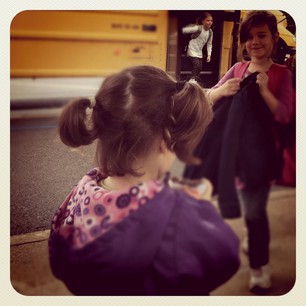 And a mere 4 hours later, a bike rider.

“Mom, can we ride bikes? I mean, my real bike without the training wheels?” I admit, I didn’t want to. It’s tedious, she struggles, Finley gets needy, my back screams. I started to say that we would in a while, but something about it rubbed me wrong and I said, “Ok, let’s go.” Her eyes bugged out, she started to ask if I was serious and thought better of it. She was downstairs with shoes and a helmet on in 2 minutes. Five minutes later I let go.

I realized as I stood in the street watching her make increasingly tight turns and pedaling more purposefully and elegantly, that the game had changed.

She is on her way and the best I can do is sprint beside her and dare to dive into the new things that call to her to explore. I did not count the days to this milestone, but as I put this day to bed, I understand that as our children grow our musings about their lives tend to move beyond what’s in sight.

I need to slow down my imagination and strengthen my let’s go. Because by saying yes to bike riding, I found us side-by-side in a living, breathing milestone.

*Video taken, iPhone in mouth, then hand, panting created naturally via sprinting alongside the newly minted biker in muggy air.