About 2 months ago Finley gave up nightgowns. Flowers, princesses, long, short, old, new, made no difference, she wanted nothing to do with them. I wouldn’t make a huge deal out of this except that it coincided with the height of her insistence that she didn’t need a diaper at night (she did. Again and again, she did.) Despite my misgivings I gave in to her requests to wear pjs to bed. I had thought that the biggest struggle would be in taking her rag-doll, sleeping self to the bathroom every night and tugging this way and that so I could set her on to the toilet to pee.

As is almost always the case when I leap to conclusions about how something in parenting is going to be, Finley proved me completely wrong. Since the first time she donned pjs instead of a nightgown she has insisted on buttoning the shirt herself. These little girl pajamas do not come with buttons made for little fingers. Tiny, fragile and often to too small to stay fastened within the button holes, the buttons wiggle out from between her pink little digits. So often I’ve waited, expecting frustration and defeat. 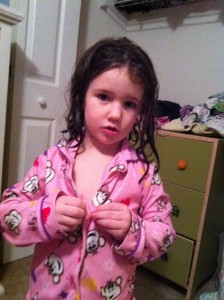 Instead she pops her little face up, the sheen of bath time still present, and she says, “I can do it.” Her tone is calming, reassuring and matter-of-fact. I sit back and watch, beyond impressed that she has chosen this thing to do herself and grateful that I haven’t steamrolled past her willingness to keep going and just done it myself. The buttons don’t all come easy, sometimes she realizes that she has gotten off course and that the top is gaping, other times she decides she’d like to start at the top and not the bottom. Her ability to reset and begin anew with undiluted focus and optimism can make my cheeks burn.

How many times a day do I puff up my cheeks and expel a massive whoosh of disappointed, annoyed breath? How often do I let the naysaying in my own mind prevent me from conquering that which only seems impossible? Lately I’ve taken to using this buttoning time to reflect on how much I can do if I just harness a little bit of Fin’s attitude of “I can’t not do this.” I think that as I store memories of her like this, I’d like to try and offer her a few of her own where she sees me smiling and working through until I get it right. 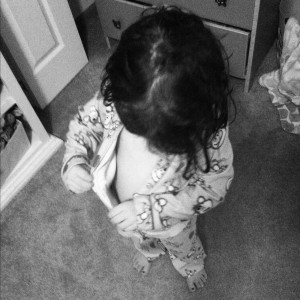