The Way It Is

A few months ago we went to a fundraiser for a local organization called Art in the Public Eye. Sean and I walked around scanning the silent auction items before bidding on a few different things, one of which was a family fun pack for three hours at a Lake George Arcade. I think somehow the idea of bidding on (and winning) a kid-friendly item tempered the guilt of another late night out without them. The certificate has been on the side of the fridge ever since. The other day we decided it offered the perfect opportunity to do something entirely kid-centric.

The certificate didn’t really explain what it represented, upon showing it at at the counter we were told, “Here’s a bucket of quarters, we’ll refill it as many times as you can empty it.” I looked around at the dimly lit, seriously run-down family of second rate machines coated in germs and wondered how long we’d actually stay. The girls were delirious with joy. Bottomless quarters meant that they could do anything or everything. There were little carousels and character rides, huge, illuminated air hockey tables, rows of pinball machines, photo booths, and more of those try-and-grab-something-with-the-claw-games than I’ve ever seen in my life.

We began slowly, moving from one spot to the next, “Ooh, can I do this?” and “Hey, come race me at this.” I carried an armload of coats and hats as snow fell heavily outside. Sean hovered, a huge grin on his face as the girls would scatter and then come right back to tell us breathlessly about what they’d just discovered, “A talking clown, it really, really talks and then it gives you an egg. See?” Finley gushed as she held out a tangerine colored plastic egg. Her excitement was contagious enough to take my mind off any misgivings. I snaked through the maze of machines with her. We controlled extendable arms capped with boxing gloves to knock over little, tiny, rubber duckies. We held quilted mallets and pounded flashing lights to make our frogs hop faster.

About an hour into our visit we all walked over to to a laser challenge near the counter. Finley asked to go in with her sisters and then they were gone. They disappeared into the darkened room of lasers, the object being to pass through the tangle of light without touching the rays. A screen outside the room allowed us to watch, Finley quickly came back out shaking her head. “Instead, I’ll just watch,” she said as she snaked an arm between my legs and rested her head against my hip. I smiled, I don’t mind having someone who still feels more skittish than bold in the face of big kid adventure.

Briar zipped through the maze with ease, while Avery would move through and drop her back foot on the laser each time, eliciting a flashing light and screeching sound from a device in the corner. Briar and Avery have been like this since they were about 4 and 6. People would mistake then for fraternal twins, as Ave has always performed like she is older than she really is. Generally it’s these tests of precision that remind us she is only 6, not nearly nine. They burst through the black velvet curtains with huge grins, no competitive heckling. I felt myself puff up, my three girls, each so different in both abilities and interests, all getting along.

“Oooh, mom. I have to go to the bathroom,” Finley squealed as she dramatically pantomimed holding it in, knees locked together, elbows out and a look of panic on her face. I walked to the counter, “Excuse me, can you tell me where the bathroom is?” The man looked at me and said, “We don’t have any for the public. You have to cross the street and go to the visitor center.” I flared, I had made the assumption that a place intended for kids and families would have a bathroom. “Are you serious?” He looked at Finley, then back at me, “Yes.” I waited thinking surely he’d make an exception. Nothing. “Are you sure they’ll be open?” He nodded, “Oh yeah, definitely.”

I stepped away and said to Finley, “Let’s go.” She put on her coat and made not a peep. When we got outside I scanned the street for a restroom sign. We stood on the corner of the street, there was no crosswalk and the lines of the intersection did not follow a clear pattern. Cars whizzed by and I was clucking my tongue at how we’d gone from the arcade to a real life game of Frogger. I watched the light and it never seemed to land in our favor so when I spied a break in traffic we darted across. Finley giggled beside me. “Let’s skip. Skip with me, mama.” We skipped down the sidewalk and bounded up a set of stairs passed a group of ice fishermen smoking on the deck.

We made our way into the frigid bathroom. “Wow, I’ve never seen a silver toilet before, have you?” Finley asked, her forehead a bundle of inquisitive wrinkles. “No, sweets, I haven’t.” We went about our business, washed our hands in freezing water and waved our hands beneath weak dryers. As we made our way back to the arcade, alternately skipping and sashaying, we tried catching snowflakes on our tongues. I smiled in spite of myself.

“I’m sorry we had to come all the way across the street in the cold to go to the bathroom, Fin.”

She stopped, squeezed my hand and said, “Well mom, that’s just the way it is. ‘Cept we did get to see a silver potty and skip together, so actually, I am kind of glad they didn’t have a bathroom at the…what’s it called again?”

“Right, at the arcade. Did you want to skip with me again?” She looked up at me as a snowflake landed with a wet splash on her eyebrow. 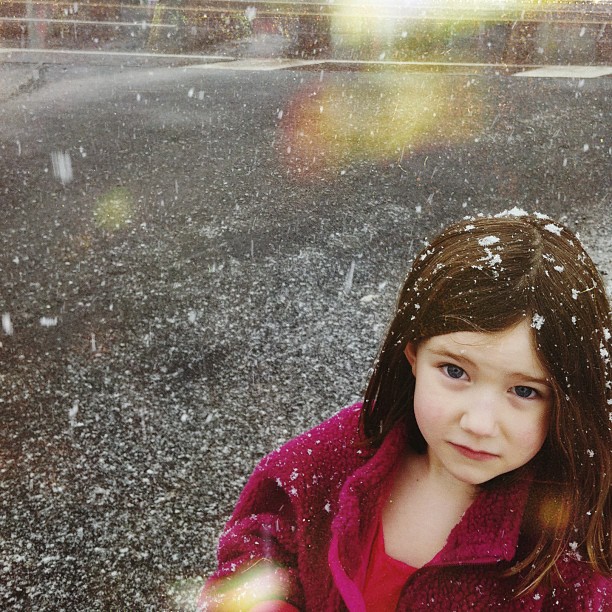 I looked at her face, drinking in the way the cold air had kissed her cheeks with color, the way the tendrils of hair fall against her skin like surf. She held my gaze and skipped once in place.

“Of course I want to skip with you again.” We held hands and crossed the suddenly empty street. The snowflakes were impossibly fluffy as they peppered the way before us. Once again I was sobered by just how easily my girls can show me that there is genuine magic in the way it is if you are willing to be open to it.

Do you allow yourself to be open to magic?