When I read about broken homes I wonder what they’re like and then I realize, alternately sheepishly and defensively, that I am one of their statistics. A broken home, or is it really a fixed home? Did our houses break or did they realize that they hadn’t been built correctly to start? An odd introduction, to be sure, but this does have a connection to today’s post. Because while I don’t feel like divorce is something that I survived or overcame, it did play a role in my love of reading. It was between the ages of 11 and 14 that we made the separated to living-in-separate-states to divorced transition. It all began in the midst of an Archie comic book phase, the allure of that reliable cast of characters made my heart race during a time that girl classmates were making the journey from playing with you to pitting other girls against you. “Mom, can I get that?” She’d look over to see what I was holding; she always said yes to comics. Sometimes they were the tall, slender, traditional slick-covered comics, other times they were the short, squat, bound digests. I’d clutch them in my hands on the short drive home and then disappear to my room, chumming around in my mind with Jughead. I had dozens of them lined up on a shelf. I was Betty and suddenly all the school-yard drama made sense. There were no mean girls to contend with, just the tidy, frenemy scenario with Veronica. In Archie comics everyone was different—rich and poor, hip and unhip, plain and glamorous, rather than seeming like misfits it was as if in order to have life, you needed the entire cast of characters, not just the cool kids. 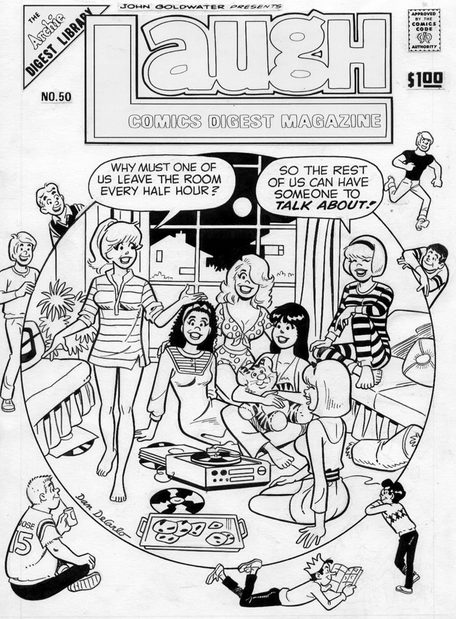 Later it was Nancy Drew with George and Bess, friendships she appreciated, but mostly Nancy was on her own. Next, after a brief dalliance with Sweet Valley High and the Wakefield twins, came the darker turn to Stephen King and Dean Koontz. I dove headlong into the seedy, underbelly of pulp fiction, stories so over-the-top that they could only be an emphatic break from reality. I left books in college, Joyce Carol Oates’, We Were the Mulvaney’s having quite nearly destroyed me, and took up with plays—acting in them, working backstage, and, at one point, even trying my hand at writing one.

Twenty years later I realized that my love of words, all those years and minutes and lifetimes spent in afternoons devouring stories by other people, were readying me to create my own. I don’t dream of travel or adventure, I dream of a voice somewhere asking if it’s ok as she holds a bouquet of words I’ve arranged, or of a sound in the early hours of morning, lips forming the shapes of words I’ve typed and then the gentle nod of her head, or tears streaming down her face as I pierce her world and deliver her to a moment somewhere else, even just for the briefest flash of dawn.

This is all leading to my participation in the My Writing Process Blog Tour. A few questions, some answers, and then the promise of more from writers that I have loved for nearly a decade. My invitation to this came from Lindsey, someone who I imagine was turning pages with ravenous fingers in a parallel world to mine, her confusion about life coming in different ways, but her escape coming in a similar black and white, a wrinkle in a sometimes too brightly colored world. She writes with intimidating honesty about her feelings, something that I’d wager comes in part from finding such intimate solace in words for so many years. You can see for yourself through this link to her beautiful writing.

Being me. That sounds hokey, right? I mean it, because I have, despite being a pretty confident and outgoing person, never been very good at believing that I was good enough. Say that you like my writing and I’ll say thank you with a qualifier, “It’s really just the timing,” or mention that I look pretty, “Yeah, but I’m a klutz and there’s a hole right here in my sleeve.” I cannot just stand and be me with pride, there is the issue of not having the higher ed pedigree of other writers, or the issue that my approach to grammar is more instinct than know-how. I swear, bite my cuticles, and stubbornly write sentences that are too-long and repetitive. Edit with a knife and believe in myself, trying not to twist in to believing in edits and knifing myself.

Sean recently helped me with a redesign to this site. I’ve stripped away many of the things I clung to for legitimacy—buttons, memberships, badges. Instead I’ve taken the goals I’ve set and met over the past 6 months and displayed links to them at the bottom of this site. Mamalode, Brain, Child Magazine, Scary Mommy, Huffington Post, BlogHer, all the places I wanted to be published and now have been.

What I am working on is getting over the overwhelming fear that I am good enough, just not disciplined enough to carve the time and drive to leap toward my bouquet of words on a bookshelf.

2. How does my work differ from others of its genre?

I suppose I have to know how to answer this in order to ever really sell a book. Maybe it does trickle back to divorce, or maybe it’s who I’ve always been, but there is a worship of joy in me at all times. I can hold a grudge and be a smart ass, but deep down, whether in the parenting moments that I write about or in the tides of marriage, I identify joy. Sure, life is hard, marriage is sticky, and child-rearing is more exhausting than labor, but that we get to feel the slippery stamp of infant lips open wide and lunging at our faces, that we curl up in beds with wrinkly sheets next to people who’ve seen us at our worst and still turn to us for warmth in the night? The little bits of purple crocus that spring next to the thawing dog poop in the backyard? It’s gorgeous and full of promise. My writing may not be entirely different, but it is entirely mine and for some people I know it will fill a dry rut, soften edges that moments before seemed lethal.

Here’s a guilty admission, sometimes I will try writing something to do that thing that some people do so effortlessly, to latch my star onto the meteoric rise of a hot topic. Being topical can get clicks, but it is never the best stuff that comes from that. Enter hokey once again: Be yourself, it will never fail you.

I write what I do because at some moment there is a shift in the light or a tingling in the back of my throat, this, this is what I have to write about. Have you ever walked somewhere sacred? Visited a place or witnessed a thing you knew that you’d never forget? That is why I write what I do, sometimes it’s as simple as a word that sparks it for me. The sensation I get is of complete infatuation, I have to get to the keyboard and spend time with this idea, this emotion, touch it, roll it between my lips, so that I can release it with the thrum of life still intact between the letters.

4) How does your writing process work?

How I write is more reflex than process, with little notes scribbled on the backs of bank statement envelopes or typed into draft emails—ice, socks, dance—then I hold on to them, sometimes for so long that I have to root through several bags and drawers until I find the grungy bits of paper. It’s best when I let Sean know that I want to write, he runs ahead, lining the play up so that I can sprint across the field and carry my words to where they’re needed. Sometimes it means writing at dawn or earlier, other times he gallantly takes bedtime, wrestling, giving power cuddles, and eventually softening to nearly a whisper as he makes up stories or sings to them.

I do my writing in one sitting; I can’t start something and come back to it. My typing starts slowly and builds, I hit the keys hard and my lips move, sometimes I smile as I type, other times I weep until the tears splash off my hands and onto my laptop and I have to stop the tears. The feeling I have when I am done is like euphoria, although it can be so intense that I am exhausted from it. I would, as trite as it may sound, put it up there with delivering each of our daughters and having them put on my chest. There is nothing like it.

So that’s it, my writing process such as it is.

Thank you, Lindsey, for inviting me to do this. For the next week of the tour, I’ve invited two women that I’ve loved since my early blogging days. The first is Sarah from Splitting Infinitives, she was the interviewer in the previous link. She puts words together that make me gasp, with stories that are musical, mournful, and eternal. I’ve seen her face, looked into her eyes and seen the kindness there, also the incredible mind. I call her mine in my heart, a true friend, of which I have very few. I’m lucky this way and I guarantee that if you add her to your reader, you’ll be lucky too.

The second is Amy from My Chicken Cheese. She is magic, always has been. She worries, but who among us doesn’t? She has got a grit that you shouldn’t underestimate, Amy also has a way of saying things that is refreshingly honest and darkly funny. I think that in the space ahead, she is going to ignite, I can’t really explain what I mean by that but you wait and see, she’s the real thing.

I hope that you enjoyed this and that you’ll go next Monday and see the spin the Sarah and Amy have put on this project. Speaking of projects, many months ago Lindsey invited me to be a part of a project that launches today, the publication by Brain, Child Magazine, of the This Is Childhood Series. They have taken our words and created a journal of sorts. There are stories, memories, writing prompts and spaces for parents to jot down pieces of the childhoods they are watching transpire. It’s available for purchase through this link, fair warning the writing within will make you laugh and cry, sometimes at the same time. 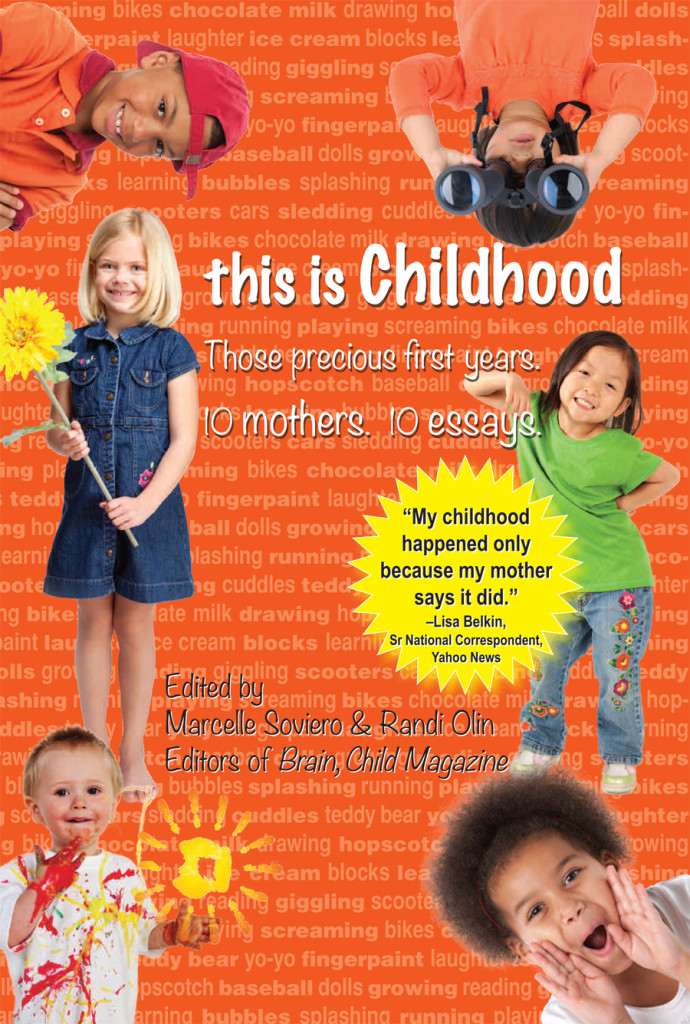