I have a routine in the mornings, after a cuddle with our early-rising cat, I pad downstairs, make coffee and check my email, Twitter, and Facebook. The volume of junk email I receive makes the email check a nice warm-up, easily done with heavy lids and a not entirely alert mind. Twitter is my favorite, my circle of friends there are wildly passionate and quirky. They educate, challenge, and fascinate me. Whether it’s chatter about a tv show or advocating for gun reform, I discover new viewpoints and humbling daring. For the most part I am safe in what I tweet about; avoiding perilous ledges of conflict because I have a business and I know that sometimes my very liberal Pacific Northwest roots put my views in conflict with what might be the majority. It isn’t worth the dynamic—UNTIL IT IS.

Yesterday morning as I tried to avoid the trending box on Facebook I saw ‘Campus Shooting’ again and again. I clicked back to Twitter. My feed was a sea of one hashtag #YesAllWomen I didn’t think anything of it until a voice I respect retweeted a rush of #YesAllWomen tweets. This image popped up: 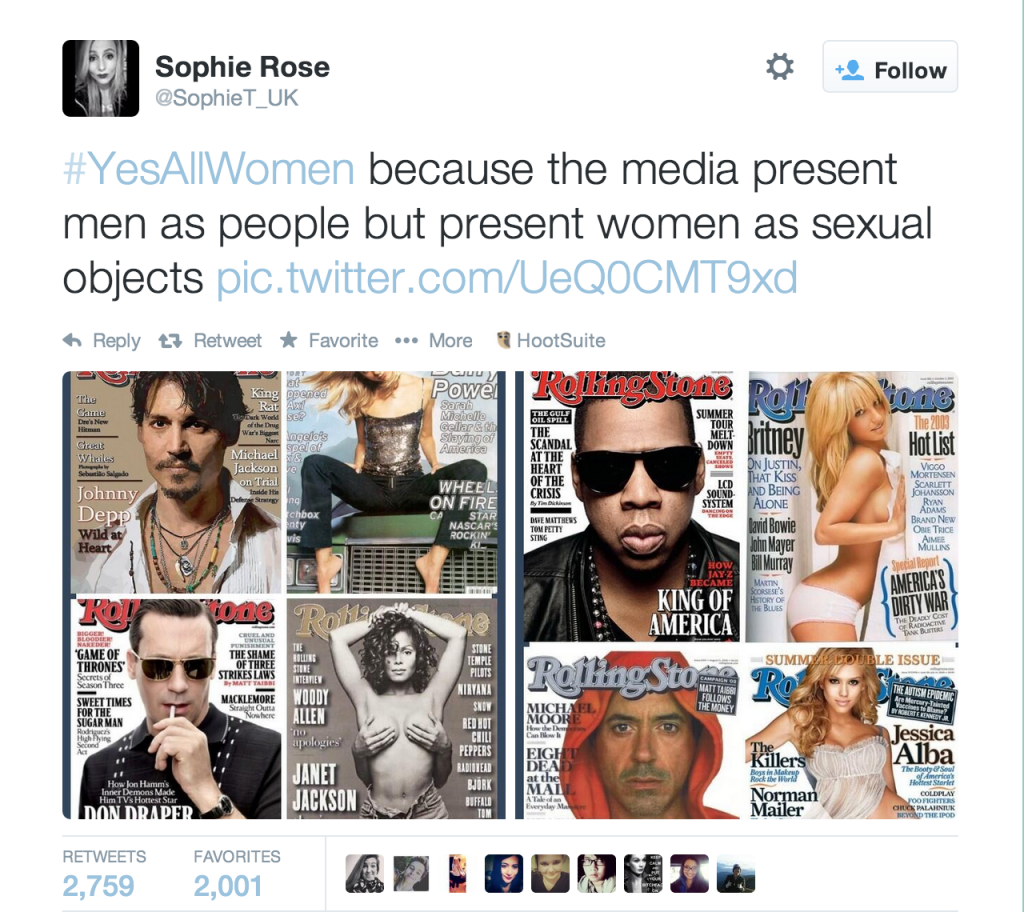 There is nothing new about this image, nothing revolutionary about women in various states of undress on magazine covers. What has changed for me is that my daughters, all three of them, are asking why.

“Mom, why on earth is she in inappropriate stuff on the cover?”

“How come the girls are always showing their stuff and boys are in suits?” they waited, watching my face.

After stammering that the women do that because it is what they feel they have to do to compete I recoiled. I don’t want that for them. I decided that I was going to draw a line and when that line was crossed I would speak up, I would do whatever it took to not be a part of the other side of that line.

You got it, I’ll take them. Because I don’t know when this became acceptable as a way to sell shoes. 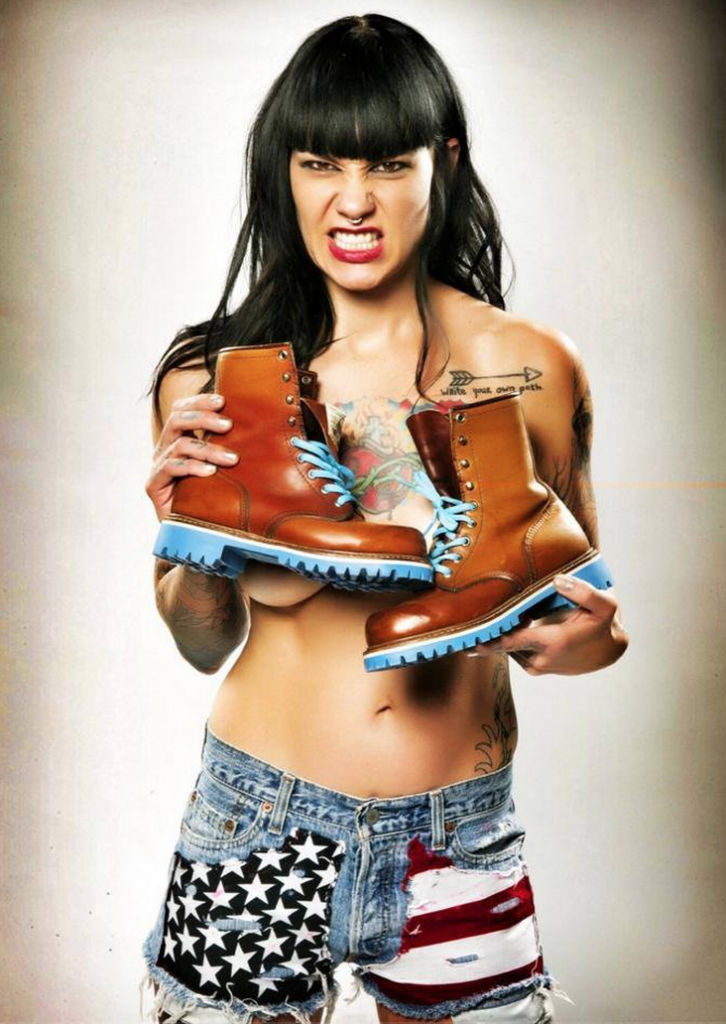 I began reading the tweets, not yet understanding that they sprang from the campus shooting story.

RT: @stefgraser #yesallwomen because guys can be shirtless at practice but I can’t run in a sports bra because it “distracts them”

RT @KariJoLee #YesAllWomen Because The Breakfast Club was released in 1985, but this is still an issue. 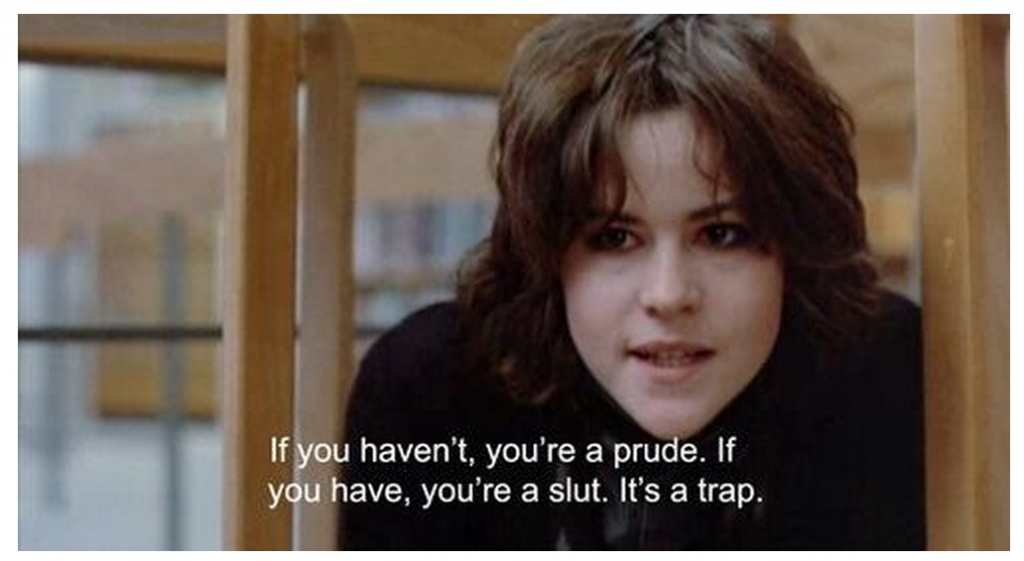 RT: @thatkristen  Misogyny and the mistreatment of women has become accepted by men AND women. We’re all guilty. #YesAllWomen

RT: @MommyNaniBooboo  1 in 4 women is a victim of sexual assault… and #YesAllWomen live with the fear that they’ll be that 1.

RT: @LeahMeyerhoff   Because society is more comfortable with people telling jokes about rape than it is with people revealing they have been raped #YesAllWomen

RT: @AmyVernon  #YesAllWomen because every woman I know has *at least* once in her life feared she would be raped. And too many have been assaulted.

I jumped into the conversation.

@AmandaMagee If the idea of #YesAllWomen threatens you and makes you feel panic, rage & that life is unfair, congrats, you just got a taste #NotAllMen
@AmandaMageeYour decency doesn’t change it, just like mine didn’t keep me safe from rape, molestation, and harassment #NotAllMen #YesAllWomen

Then I had a man attack me, saying that the real issue is that men can’t be victims. I calmly suggested that maybe the problem isn’t that there is one problem, maybe, just maybe the problem is a pervasive attitude that things are certain way, boys will be boys, beauty comes with attention, man up, don’t be a pussy.

He told me I wasn’t smart enough to understand what he was saying. I suggested his anger be directed at a larger population than women. He stopped talking to me.

He was too busy with this:

Handily demonstrating how quickly insults devolve to threats of violence against women.

Then I received a private message from an incredibly strong friend: Oh my God…that I’m sitting here sobbing and thinking that I can’t let my kid find out on Twitter that I was raped..and that idiot is worried that he can’t be allowed to be a victim?

I can understand how this hashtag made people uncomfortable. We have all contributed to where we are today. I’m not sure when it began. I know that 25 years ago when I complained about my teacher saying that I looked hot, I was told that he was entitled to have that opinion. These aren’t easy things to face, it’s easier to think that it doesn’t happen or that it is the exception not the rule.
The #NotAllMen hashtag that emerged in response was peppered with hate against women, but there was also a very real argument that not all men are doing these things, which is true. The issue that bubbles up for me is that just because something is not an issue for you or with you does not mean it doesn’t exist.
RT: @schmutzie  The validity of #YesAllWomen isn’t based in the impossible task of speaking to 100% of particular human experiences. Larger truth prevails.

I am a survivor, even saying that bothers some people.

@AmandaMagee The anger we have for assaults on us are expected to have both volume control & expiration dates. “Aren’t you over it yet?” #YesAllWomen

What now? Where do we go from a conversation that some are too afraid to participate in, others are worried that it unfairly villainizes them, and others still think that it is just more complaining? Start quietly. Sit somewhere and ponder what it means to have it suggested that the onus is on women to make sure that they don’t incite unmanageable lust in a man. Or that being too attractive could mean losing your job, or that we are raising boys who think it’s the responsibility of teenage girls to keep them from feeling tempted. Isn’t it time that we worked toward a reality that had clear lines.

For a long time I was ok with saying that I could strategize my way around things if a client had to “hear it from a man” and that I could swallow my frustration at the incessant objectification of women as a sales ploy. I’m not anymore.

I am a feminist. I strenuously believe that men and women are equal. We are different, sure, but that does not make us not equal.

I shouldn’t be afraid—

afraid to speak my mind

afraid to believe in equality

afraid to call out hate…

and yet I am, which makes it that much more important that I insist on supporting the #YesAllWomen wave.