There are some milestones that I have breathlessly watched for—first steps, “mom”, reading, riding a bike. I rejoice as the girls achieve them and some times find myself a bit crestfallen at how much they make me ache. Over the past few months I’ve realized that we’ve reached a new one and it terrifies me. All three girls are sitting on an axis that is tilting them toward a new realm that involves unabashed worship of kids older than they are.

I can see it in the trance-like effect of movies, the absolute silence that comes over them when we pass a group of teenagers, the way their necks crane when we pass the neighbor’s house that is always peppered with boys playing basketball without shirts. They quietly posture, affecting poses to look older. Finley is less fluid, the exaggerated swiveling of her hips more comical than anything, but her sisters not so. They are devouring each teen sighting as if they’ve been assigned a character study in theatre. 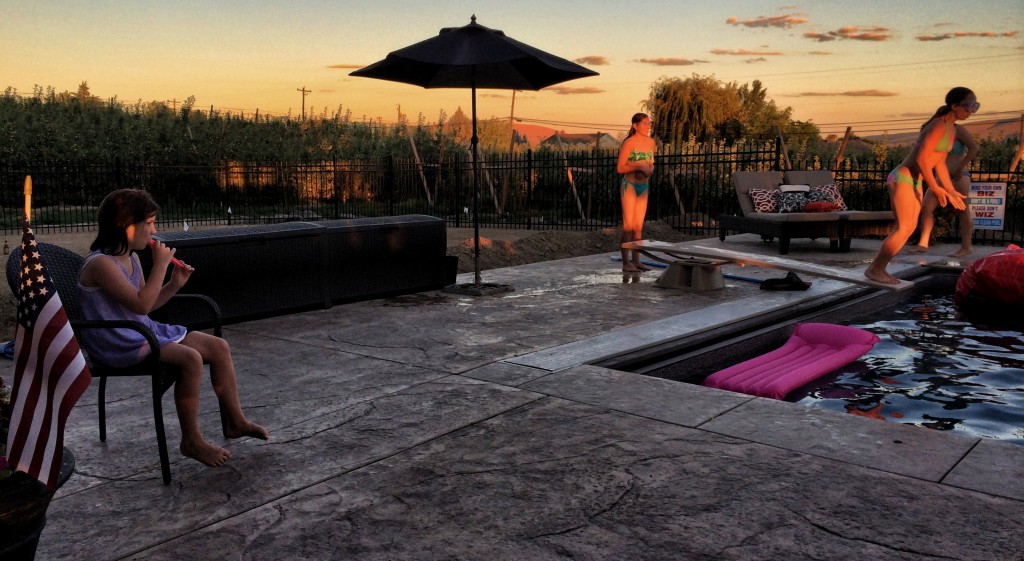 Just last week I watched Avery as she quietly ate a Freeze Pop and watched a crew of teenage girls of all sizes race around a pool. I wish that I didn’t, but I found myself thinking, “I’m so glad that she’s just eating a popsicle. I don’t want the day to come when it becomes about calories and whether or not she deserves it.” I watched the girls too. They went from launching themselves off of the diving board to riding four wheelers to tearing around the yard hurling one-liners at one another. I found myself thinking how glad I was that they were such great role models, but then I remembered how much testing and experimenting is done at that age. They aren’t supposed to be perfect role models; they need to do dumb things. Testing the waters of sexuality and rebellion is critical, how do you not watch like a hawk and impede those instincts that they have to try things, fail or triumph, and learn to deal with either outcome?

I have no idea what to do, how loudly to speak, or how plainly to display my dismay over certain things. All three girls are obsessed with the song Timber. Some people might judge me for letting them listen to a song like that, but the reality is there are so many hours of the day that I don’t monitor, can’t monitor. The truth is they knew the lyrics to the song (with some comical errors) before I’d even heard it. Cafeteria? Movie? I have no idea where they learned it, but they did. Am I supposed to go into what some of the words may mean? Am I supposed to say that they can’t listen to Kesha? Or do I tell them that she is a great cautionary tale of how things can derail and that it’s never too late to change something?

The truth is I hate so much of what may be ahead. The size wars—it took me thirty years to not judge myself for my size ten feet or for knowing that I’ll never be below a size 28 in designer jeans and that in many stores, despite being skinny, they just don’t carry my size. I’m only just now ok with buying a size large shirt to accommodate my shoulders. The apologizing for every little thing? It’s maddening. The threat of assault, the doubt, the judgment. The focus on women aging and the sustained critiquing over whether or not you still have it. Being too vocal, too aggressive, dressing too this way or that way. It’s like a lifetime penance for playing with dolls, we’re treated like dolls—don’t dress like that, don’t say that, fit into a tidy model, you aren’t smart enough for that.

I am rambling, which I think is normal. I have three daughters to raise in a world that I am still trying to figure out myself. How do I teach them not to be overly concerned about image when it still matters to me? How do I give them license to love themselves, to enjoy feeling pretty or sloppy when I still berate myself for not being able to do certain things? Can it be taught to embrace all paths—boys who cry, boys who don’t, girls who are curvy and girls who are flat? Do I teach them what I’ve learned about scanning a room to know whether it’s safe to say a certain thing or not? Do I express my hope that they don’t grow up to start a massage parlor and salon in LA called The Jolly Fox or do I delight in the fact that they are imaginative and driven?

I suppose that we all just have to take it day by day and allow ourselves the same forgiveness as we too experiment with boundaries. Maybe the secret is honoring a five second delay before I launch into my opinion on something.

Waiting a moment before judging can’t be a bad thing for anyone, right?