We were sprawled out in the backyard. Sean was spraying the big girls down with a hose and Finley was devouring a sandwich in a lawn chair. The cat and dog were at our sides, both seemingly delighted that we were spending the day in a way that they could be with us. As the grass began to get soppy Sean passed the hose to Briar and Avery and gave them a three minute warning.

“Three minutes and the hose is done!”

“Okaaaaaaaay!” the girls screeched. Briar was in a purple and black suit, Ave a black rashguard with paint splatter accents and matching bottoms. They darted this way and that, their bodies shiny. Briar’s legs are long and slender, the stretch from knee to hip impossibly long. Avery is all muscle and power, her torso echoes mine in its endlessness. I watched as they would stop to swing their hair like a weapon, shooting sprays of water before slapping audibly against their skin.

They bolted for the door, stopping briefly to flick blades of grass from the bottoms of their feet, which are nearly identical in size and shape. Sean looked my way, cocked his head and said, “You happy?”

A lump threatened deep in my throat and I felt the sting of tears that could come if invited. “Perfect.” He smiled and walked inside. I sat quietly as the girls happily ate popsicles. “Mom is it ok that I already had a frozen yogurt today?” Briar asked. I nodded. “Here’s the thing about summer, when you are running and playing and just moving your body and breathing fresh air all day, you need fuel. It’s ok if you have a few popsicles as long as you eat some other stuff too. Better hurry, it’s going to melt.” She beamed.

As they finished their treats and popped the sticks and wrappers in the bin, they gathered around me, not wanting the time together to end. Finley asked to crawl on my lap “frontwards”.

She began absentmindedly touching my stomach. It would seem contradictory that I am comfortable wearing a bikini, but that having my tummy touched makes me nervous. It does. I work very hard in these moments not to flinch or say, “No, no, don’t touch me there.” Is it the right thing? Should I let her know my tummy is a me-zone? Or is it just my stomach and I am way overthinking this? I have no clue.

On this perfect Sunday I did not flinch, I did not let the feelings of discomfort overwhelm me, I just took in the moment of touch, so reminiscent of those early nursing years. And then…

My nervousness crescendoed as she squeezed my skin together. Her fascination had nothing to do with anything related to body image or fat, it was entirely about creating something from nothing that entertained her. It felt almost as if I were a witness to it, rather than a participant and I saw it for what it was; love.

We have time to develop skills related to good touch and bad touch. We can concentrate on honoring how people want to be treated and touched. I understand these are responsibilities I have as a parent, but yesterday it felt like the lesson was for me. Sometimes my body is just my body, not a contest, not a measurement of worth. Letting go of the panic of whether my skin moves in a certain way when I move leaves a far greater capacity for having fun than I knew I was capable of having. 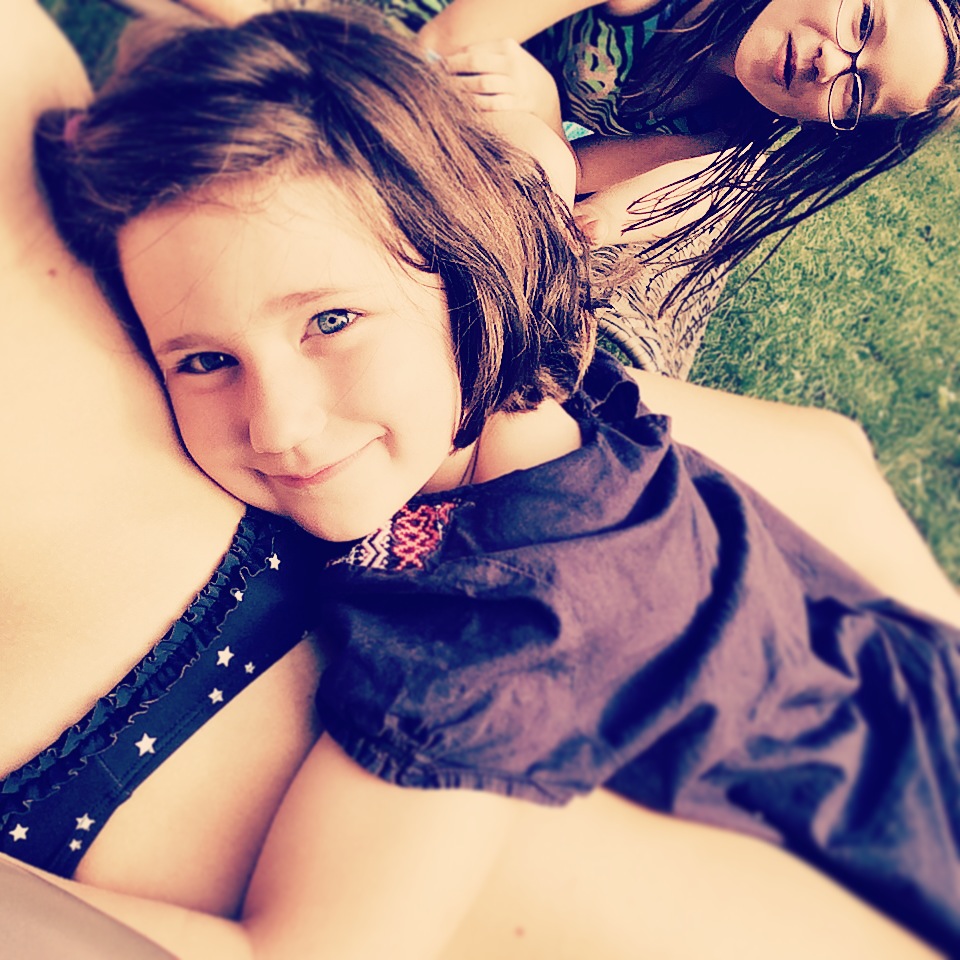 It was something that I needed to learn. I’ll never know if it taught the girls anything, but it did change me and I am so grateful.