Negative as a Habit

I am as guilty as the next person for getting caught up in the jagged edges of “Yeah, but…” I’ve been trying to curb the habit, particularly as we get deeper and deeper into the sibling squabbles and battles of who was more wrong. I hear the words coming out of my mouth as I reason with the girls about letting things go, “You just have focus on you, don’t let what your sister or any of the kids at camp say, change your joy.” It makes sense, it’s great advice that will serve them their entire lives; if they hang onto it beyond elementary school.

I catch myself having anticipatory verbal spars in the shower. Like I’m on a basketball court and rather than going about my day, I’m trying to anticipate which way the point guard is going to pass the ball so that I can pivot ahead of the move, steal the ball and barrel down the court. The problem is I’m in my shower and there’s no fight other than the one in my head.  I try to reset, but as the minutes pass my mind goes back to the “yeah, but.”

I discovered that a huge red flag for me is when I formulate what I am going to say before someone else has finished what they’re saying. Think about that, have you ever done it? You latch on to something that has been said and you load up a response. Or maybe that’s just me.

When I find myself doing that I open my hands, really open them. Then I think back to college, a time when I was deeply negative and actively looking to add more pain to my list of hurts. I took a course called “Listening.” I went in with great skepticism and the hope that it would be an easy course to breeze through. Turned out I loved it. I wanted to listen, craved someone that wanted to talk to me and that I wanted to hear. I learned that wanting to hear someone means being willing to listen. How can I hear them if I don’t allow myself the benefit of their complete thoughts?

It seems like there is a pretty familiar rut for a lot of us that involves slipping into the role of complainer. It’s not that I think we shouldn’t complain, I just want for myself and those I love to have it not be the default. Yes, some things are bad, quite honestly some people are not nice and don’t play fair, but does that matter? Do they matter?

Do they deserve to ruin your day and get you so clenched that you can’t hear anything good or speak anything positive?

Ok, but what about the debilitating anger? What about the fantasies of exposing things or people for what they really are?

It’s not where the joy is, at least not the lasting joy.

You know what’s funny? I used a basketball reference in this. I hated playing basketball growing up. I also hated being wrong. I am beginning to understand that basketball and being wrong both taught me a lot about what works and what doesn’t. It’s hard, humbling work, but pushing past negativity, even though it feels like the 87th time you’ve run from one end of the court to the other and your lungs feel like they might burst, after your run you may get the ball, or the game may end, or you may just get yourself that much farther away from the moment when you were in the wrong.

Here I am, eyes closed, awkward mullet trying to grow out, and wearing jeans that wouldn’t break in no matter how hard I tried, while all the other players stood in the wings in athletic shorts. 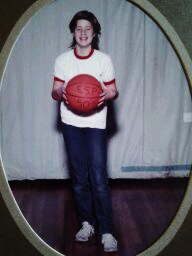 I’m ok. I survived. I belonged, sort of. And I can do this positive more than negative thing. I think that we all can.