Last year Sean and I collaborated on several posts about marriage—it’s been a while and it felt like it was time. Here is how I introduced this 2-part, I write/he writes approach before: I usually keep marriage along the periphery of the stories I tell. The silos of parenting and life are not as concise as they can seem in storytelling, they aren’t silos at all; they’re brush strokes sharing space on one canvas. Marriage, two sides, a post in two parts—first, what you’ve come to expect here, my words and emotional take on something that happened; second, words from Sean, his perspective on the same thing. It’s personal and revealing. 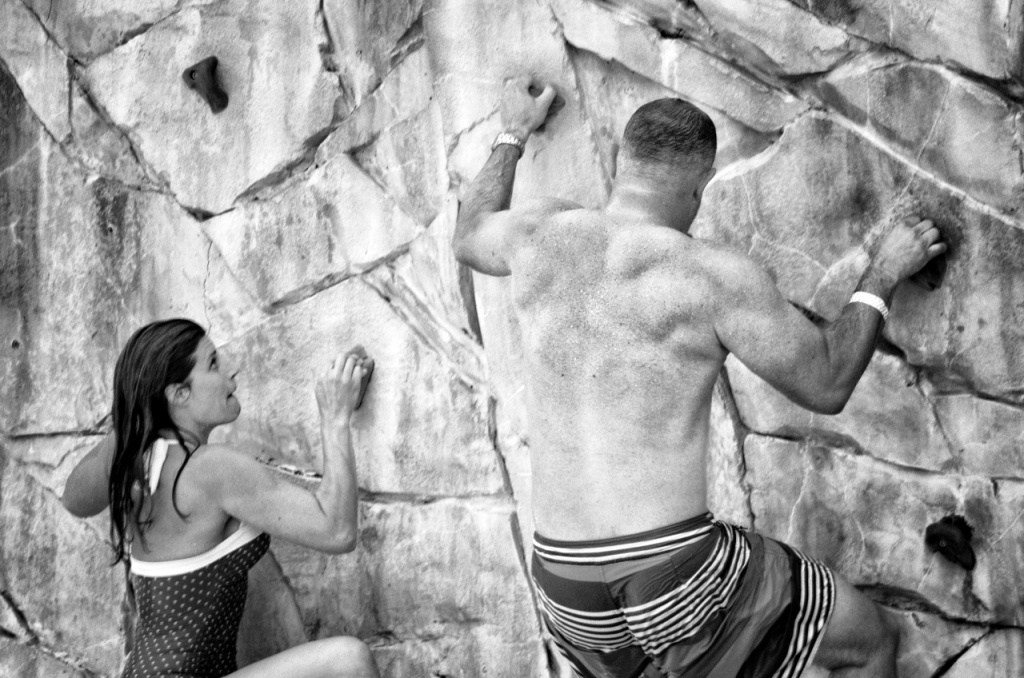 he fresh snow squeaked beneath me as I walked to the back of the car in the robotic heel-toe, heel-toe way of ski boots. I was a self-avowed ski hater for decades, retracting that is still strange. The sky overhead was a brilliant blue and the sun shone bright despite a bite in the air. I smiled behind my goggles and took a deep breath.

The effort to get everyone geared up, not to mention fueled up, tangles me in sweaty, frustrated knots. Rationally I know that we will get through it and that after the grunting and sweating, and pinching of fingers in buckles, we’ll sit on that lift, take a deep breath of fresh mountain air and everything will be all right. Sometimes it just takes so damn long to get there.

Sean was retrieving the skis and poles from the case he made for my car after one particularly brutal episode of “If I can just get this one—“ CRASH. I was keeping one eye on the girls; no matter how many times I say, “Stay close to the car. People aren’t paying attention or expecting kids and it’s hard to stop on ice,” they drift away from the car in utter oblivion to the world around them. I was trying to get my foot in a boot, looking very much like a cross between Lucille Ball and Bambi on ice.

“Here, let me get you,” Sean said bending down to hold the boot. I shook my head and muttered, “Fourth daughter.” He looked up at me with a twinkle, “I’ve got you.”

Once my boots were on I helped the girls tighten their gloves, arrange their goggles, and buckle their boots. Sean helped too, but no sooner had we gotten one girl set then another said, “Can you redo this? I had to scratch my ear.” We’d begin again.

I waited until everyone was set before I snapped the chin-strap on my helmet. Pinpricks of sweat stung in my armpits and my neck hurt. “Hold it together,” I said to myself, “Almost there.”

Sean had begun to walk toward the mountain with the girls as I went to close the hatch door of my car. I reached up and then tried to pull down the gate. I cannot explain how it happened, but I brought the corner of the door down on the edge of my helmet. My goggles flipped off, my teeth crashed together, and my head knocked into my shoulder. I shrieked.

Sean turned in my direction. “What happened?” I was so angry and frustrated I wanted to bag the whole thing.

“I slammed the door into my head.” He paused for a second and then said, “Good thing you had your helmet on.”

I tilted my head. I may have actually imagined him as a bullfighter waving an annoying, red, silk scarf at me. He waited in that unmistakable married with kids stand off—you really going to do this now?

“It really hurt. Jesus,” I spat as I stared back. The girls fidgeted. Sean just looked at me.

“It’s ok, I’ll shake it.” He started walking away with the girls in tow.

I was seething, the layers of resentment that hover on a daily basis, waiting for a weak moment, leapt at me. Laundry, lunches, cat litter, pet food, coffee, bills, rehearsal schedules and permission slips.

I knew, even as the flurry of I-do-it-alls danced around me, that the tally of unrecognized details that I manage is matched by a litany of things that he does without thanks from me, or recognition from any of us. There is no barb that could ever make me feel better for having thrown it.

Trudging behind them I actively worked to stifle my foul mood. I wrinkled my nose as I realized all the things I was so ready to spit at him were things that I insist on doing. As I caught up to them I tried to separate my skis, they stuck stubbornly. I shook them and my finger got pinched so hard my eyes watered. I heard the click of each girl’s boots locking into skis. I felt Sean looking at me. “You ok?” his face read.

There are moments when a marriage ending or continuing seems based on the sum of the times we’ve sucked it up, said fuck off, or realized that sometimes we both need to hold our tongue while the other one figures their shit out.

Friday night we sat at a table with a divorced friend who said, “Jesus, you’re married like 11 years and you hold hands at the table. Unbelievable.” Twelve hours later we’re having a spat on the side of a mountain.

I think marriage is a mixed bag of fine, white sand and jagged, cut glass. Nights like Friday are reminding me that from the outside we all look like it’s all smooth sailing. Days like Saturday are helping me get a handle on when I’m intentionally stomping on the shards of glass, reveling in anger. I don’t think the saying should be love conquers all, maybe try conquering it all for love.

I thought for certain I’d heard her wrong.

We were all but finished with the pre-ski gauntlet of gloves, helmets, zippers and latches. I’d even started toward the mountain with the kids, and after outfitting the three of them—which amounts to about nine minutes of request, rinse and repeat— I was ready to start moving.

“You what?” I asked, wondering if it was the insulated ski helmet or early hearing loss that made it sound like my wife had said that she’d shut her head in the car door.

“I just shut my head in the car door.” She said. Again.

My first thought was: “I’m not going deaf and that’s good.” Second thought: “How does that happen?” Immediately followed by a third thought: “Do. Not. Laugh.” Amanda was rattled, clearly. And after having just met everyone’s mitten-based demands I doubt a concussion was what she’d hoped for.

I tried to make her laugh—still uncertain about whether she was really hurt or had just surprised herself. “Good thing you had your helmet on!” I pointed out—knowing that if that comment resulted in a nod, or a laugh, it would mean she was fine. If it got no response, or an angry look, the plan for a morning on the slopes might change very quickly.

As it was, her response was somewhere in-between. Which wasn’t much help at all.

I wonder if other married couples develop their own sort of communication shorthand: throwing out a statement that begs for a qualified response. Test the waters. Proceed with caution.

I stood there, 20 feet away from her, slowly understanding in that tortoise-like, husband way, that it was serious. She was hurt or—possibly worse—angry.

I had all three kids with me, in a busy parking lot, and both arms were full of poles, skis and layers of Gore-Tex. A modern-day Saturday Evening Post cover. I should have dropped it all on the gravel and run over to her, but I didn’t. Amanda was embarrassed and already out of her element at a ski resort. She’s a gifted athlete and in perfect shape, and a respectable skier, yet she claims to be in over her head on the mountain. I didn’t want to make a bad situation worse by, well, being myself.

Husbands and fathers want to take care of their own. Keep their family safe and sound. Fix whatever’s broken. The longer I’m a dad the more I realize that I can’t fix everything, and, after 11 years of marriage, I know that space can sometimes be as beneficial as attention, when the situation is right. Er, wrong. Whatever.

She sighed and said “Go ahead, I’ll catch up.”

I turned toward the sound of cranking chairlifts and faced the girls, who had miraculously remained fully suited for battle. Their goggles and gaiters were in place. With ski poles at their sides they seemed like tiny knights ready for a crusade. I explained that Mom needed a minute, and that we’d get our gear on and meet her by the lodge.

After all that, I’d want to slam my head in the door, too.

We’re trying to carve out time. To provide one another with a respite from family chaos, and work stress, but we need to keep trying, apparently. Physically closing the door on yourself is a pretty literal indication that things are moving just a little too quickly.

She caught up with us in time to see the older girls schralp off toward their first run. I clicked Fin into her bindings and stood to face her. There were tears in her eyes, but her jaw was set in a way that said, “We’re here now and we’re going to have fun, Goddammit.”

That’s as good a marriage mantra as any, I suppose. Have fun, Goddammit.