No Shortage of Cruelty, Add Kindness

We got a call a few weeks ago from the cable company offering to hook up cable. I explained that we had cut it because it was an unnecessary expense and an unwelcome time suck. The woman chuckled and tried to mention stations that might pique my interest. Having been without cable for a few years, I could honestly say that I wasn’t interested in any of them.

Then she mentioned sports. The only time we have ever complained about the absence of cable has been a laundry lament, Sean saying that he wished we could have Sunday games on in the background as we folded laundry or cleaned the house.

“How much? I asked her. After some keyboard clicking and a few minutes on hold she came back, “About 8 dollars.”

She laughed, “Yup.” Between her tone, the price, and the way she interacted with me about the girls in the background, “Are they really being quiet now? You wanna come over and get my kids to do that?” she said. I told her to sign us up for the cable.

We’ve had it a few weeks now and the truth is we rarely use it. The things on television are largely lop sided coverage of events related to politics or dead children. I don’t like to stick my head in the sand, but there comes a point when I don’t want to have the tone of my day set by the horror of the day before.

Instead I talk to Briar in the morning about race and feminism. We talk about the pressures of work and the satisfaction that we work toward. They ask us questions about things they hear. Sean plays tag with the girls after dinner. Yes, we watch Blacklist and Justified, but we shy away from too much news.

Twitter has been heartbreaking lately reading about puppy slaughter, teen slaughter, female student attacks, fury over this side not hearing that side. I gather the hurt in my feed, reading the words and thinking things, but sometimes not saying them for fear that I don’t know enough about a subject or that my words might not matter.

I’m rambling, but I had to get to this small pearl. We are keeping in the good. We aren’t telling the person in line at the store that we like their shoes. We aren’t saying good morning to the man who walks his two terriers each day. I think the space between rage and grief, and celebration and gossip is becoming silent. I’ll stop saying we and use I.

I don’t speak up when it isn’t dire.

I don’t speak up when I am afraid.

I don’t speak up if it feels weird.

I don’t speak up when I’m nervous.

So yesterday I told the woman at the dealership that she had pretty hair.

I told Briar thank you for choosing to spend time with me.

I thanked Sean for trying not to be angry during the work day.

I told the damn dog he was cute.

I went to bed when I was sleepy and I wore a sparkly shirt because I felt like it.

I just want to do my part to say that every sentence doesn’t have to be “important” and we don’t have to take part in every fight. What we can do, all of us, is start saying out loud those little things that if they were said to us would feel good. 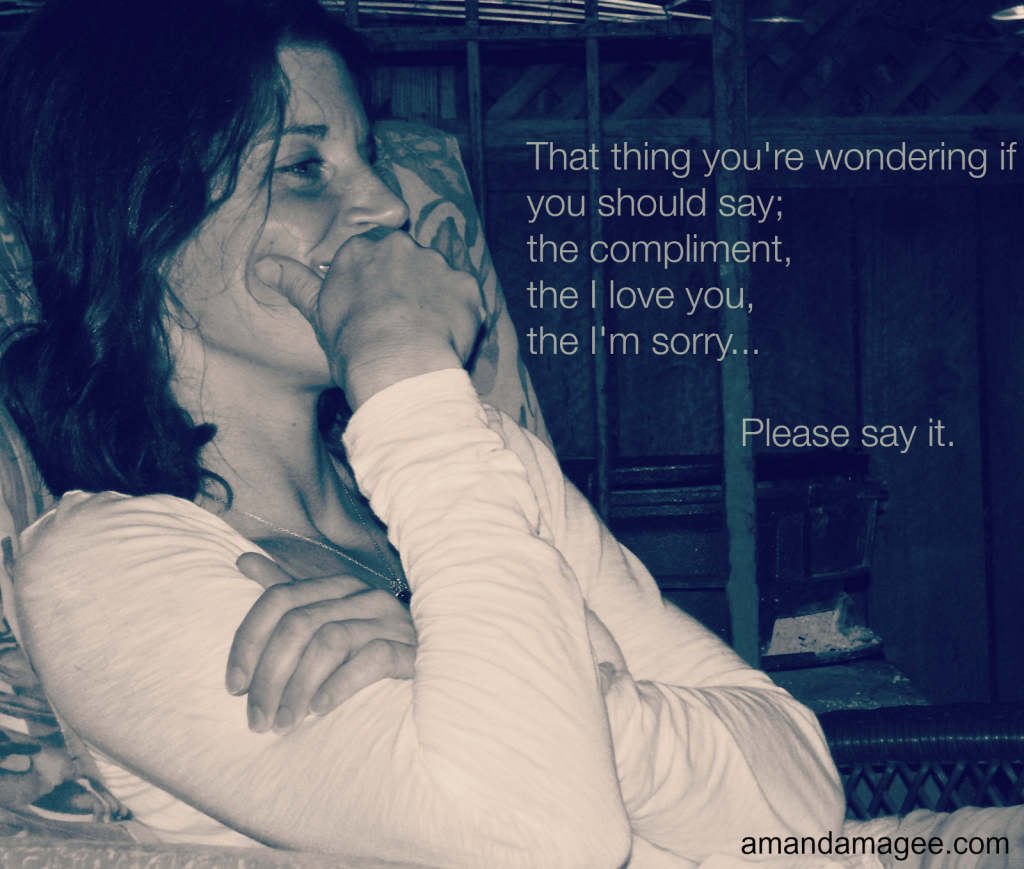 Because no matter how divided we are by politics, race, gender, finances, whatever, deep down we all still started out as little people who loved having fun and who responded with delight to praise. We can add a bit of that back into the mix, can’t we?