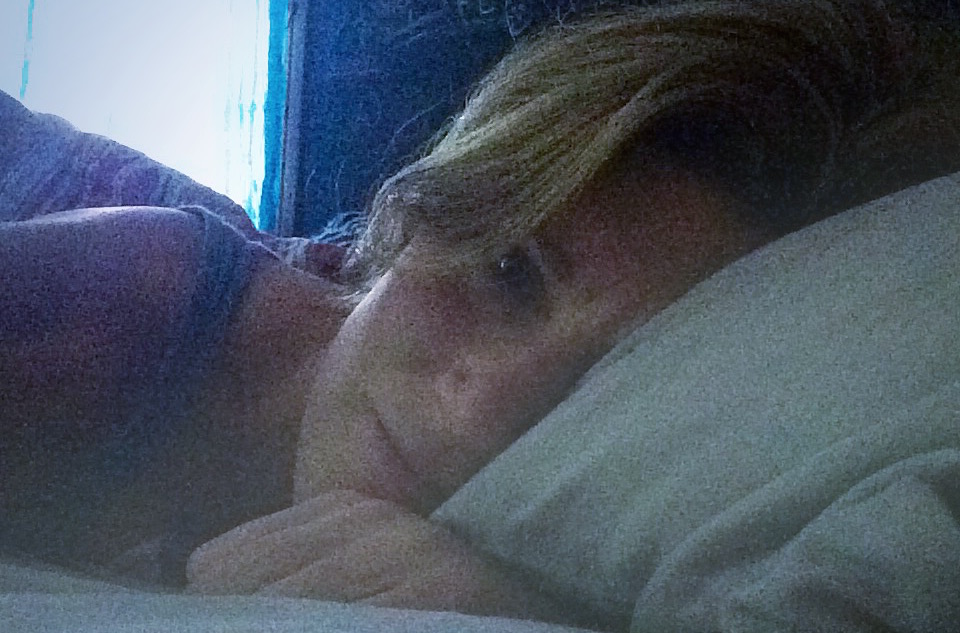 I was getting dressed. It should have been a good day, I’d slept well the night before, I’d been working out, but there it was; a persistent, dull heat and the threat of a tantrum. I was trying to avoid my triggers—don’t grab the top that I haven’t yet donated despite the fact that it always makes me feel hideous. Don’t start my hair or make up before the girls are all set because they’ll interrupt. Don’t decide this is the time to look for the missing necklace.

It’s the last one that sobered me. Giving up would be scary enough, but losing the last ember of hope, it’s just so final. I wish I knew what tripped the mood, because maybe then I wouldn’t need to keep coming back to the moment of standing before the mirror and giving myself the boxing ring, pep talk.

My face looking battered, my spirit against the ropes, and then eking out that last bit of fight.

“You’ve got this, Amanda. Get back out there, keep your arms up, elbows in, and you duck and weave until you get your moment. When you see it, aim and punch hard.”

Why is it a fight and who am I battling?

I want so much for it to be as simple as eating right and making time for exercise, but it isn’t. A trip to the gym, while amazing, doesn’t fix the broken thinking or the slipping right back into the ruts of routine and resentment.

Like a moth in the night banging relentlessly against the street light.

I heard Sean coming up the stairs when I was half dressed. I pulled a blouse on without unbuttoning the cuffs. The fabric stopped halfway over my hands, I went to take it off and become stuck. My arms out before me like a barking seal, no pants on, I felt panic spread like wild fire.

He walked in and gave me a flirty smile. He opened his mouth to say something playful about catching me like this, but at the same moment we realized I was about to snap. I tried to wrench the blouse off my arms, but it wouldn’t budge. It seems that Murphy’s Law burrows like a tick in these moments of frustration. I hated my hands, felt ashamed of so much skin and failure, I was recoiling against myself which feels like dark, suffocating emptiness.

He paused, I flailed. Our eyes locked and I had a decision to make.

I’d like to write that I made the better decision, that I laughed or that I took a deep breath and confided that I was struggling, but I didn’t. I sneered and spat that I was cracking. He stepped back ever so gently.

“Can I do anything?” He asked honestly and slightly defeated.

“I don’t think so,” I answered back in the same spirit.

His eyes slanted in concern and he took the kind detour that 12 years of marriage have brought. He gave me privacy. Before he left he said softly, “I think you are as beautiful today as you were the day I met you, more so. Crazy about you, Man.”

His hand was gentle on the door as he closed it behind him. I turned to the mirror, disappointment descending like a film, fuzzying my reflection. I walked to the closet. Somehow I managed to remove the blouse without popping the buttons. I  slipped it back onto a wooden hanger. It started to slide off toward the dirty clothes hamper below. I caught it and rehung it. I did this three times before fastening one of the buttons to keep it in place and whispering, “Please, just stay put.”

I waited as the hanger stopped swaying and the black fabric settled into a smooth line between a plaid shirt and a grey blouse. I stared up at the shelf, passing over the stacks as I realized that there was no outfit that was going to change my mood. I had to do that. I slipped into a plain, black tank top.

I walked back to the mirror. I was still there. I squeezed a small amount of lotion from a tube on my dresser and rubbed it in gentle circles on my face. I thought about smiling. I listened to the sounds of the cats sprinting through the house, of the girls getting cereal out of the cabinet, the coffee pot shutting off, and then Sean on the stairs.

I waited. He paused before coming in the room.

“I hate it when this happens and I am really working on it,” I said softly.

I walked toward him, “Can I have a hug?”

He had me in his arms before I’d finished asking. I had to decide to unlock myself, which isn’t something that I can always do, but I saw my moment and I reached for it.

He held me tight and eventually we tipped back and fell into bed laughing.