You aren’t doing anything wrong.

I get it, life moves fast, time is so precious that we all try to quickly assess each moment and categorize things in order to keep moving along, but I think there is a chance we’re missing something in our haste. Last fall we took the girls to Jay Peak. The time was particularly special for Avery, something about the athleticism of the options there spoke to her. Since that weekend she has asked to go again, to climb rock walls or try flow boarding. I kept delaying, murmuring “maybe.” She boogie boarded during Fin’s birthday party, defiantly exuberant despite being the only girl on the waves. 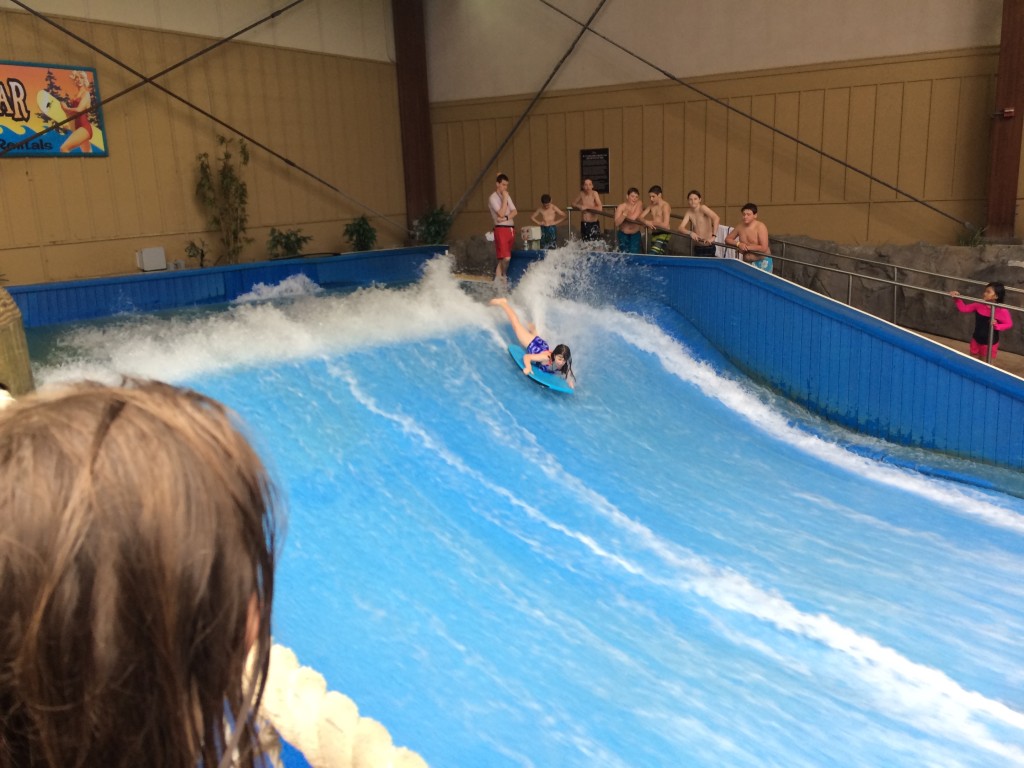 Over the past few weeks I’ve caught myself looking at people’s Facebook posts rolling my eyes. There is no single thing that gets me, but I find myself having this reflex of judgement:

“Why does she always…”

“She doth protest too much…”

The change has been that instead of railing about it, I take a breath and think, “Good for her.”

Honestly, I have gotten to a moment in time when, though not entirely natural, I move to a place of acknowledging that we each get to choose what makes us happy, whatever that is. It may very well annoy me, strike me as not what I would do, but that’s how it ought to be. Just as the things that spark my joy are unique to me.

Back to Ave and the athleticism, my friend Sara made several offers to set up a flow boarding lesson for me. I would wince each time because while I’m pretty sporty, balance isn’t a particular strength of mine, add any sort of rhythm to it and, well, let’s just say that my times in the Zumba studio I channeled Will Farrell.

Finally, it was just time. I asked if Ave could join me and she said of course. I knew that Ave would be excited and I imagined that I might take pictures and write about it. The part I kept forgetting was the me participating part. I am always there, always witnessing and cheering.

This is not a revelation about needing to put phones away or needing to bake from scratch, for me it’s a reminder that not getting it all perfect is an incredibly valuable lesson; for me and for them. This morning I decided that I’d actually be in the activity circle as opposed to the documenting circle.

Afterword, Ave beamed at me, apparently unmoved by the fact that following my first wipeout the entirety of my left side put Janet Jackson and Justin Timberlake to shame. I mean, the life guard was ridiculously solicitous from then on because, well, he’d seen things. The wedgies that followed later left me utterly unfazed, what’s a bit of cheek after prolonged frontal nakedness?

Ave’s instructors were incredible. Irina taught us both how to stand up straight and bend our legs. She said with her thick accent, “You can do this, you just have to get the falls and the bruises in and learn the feel of the water. You hurt and do the falling once, then it’s always knowing.” I smiled, wisdom far beyond a water park in those words. 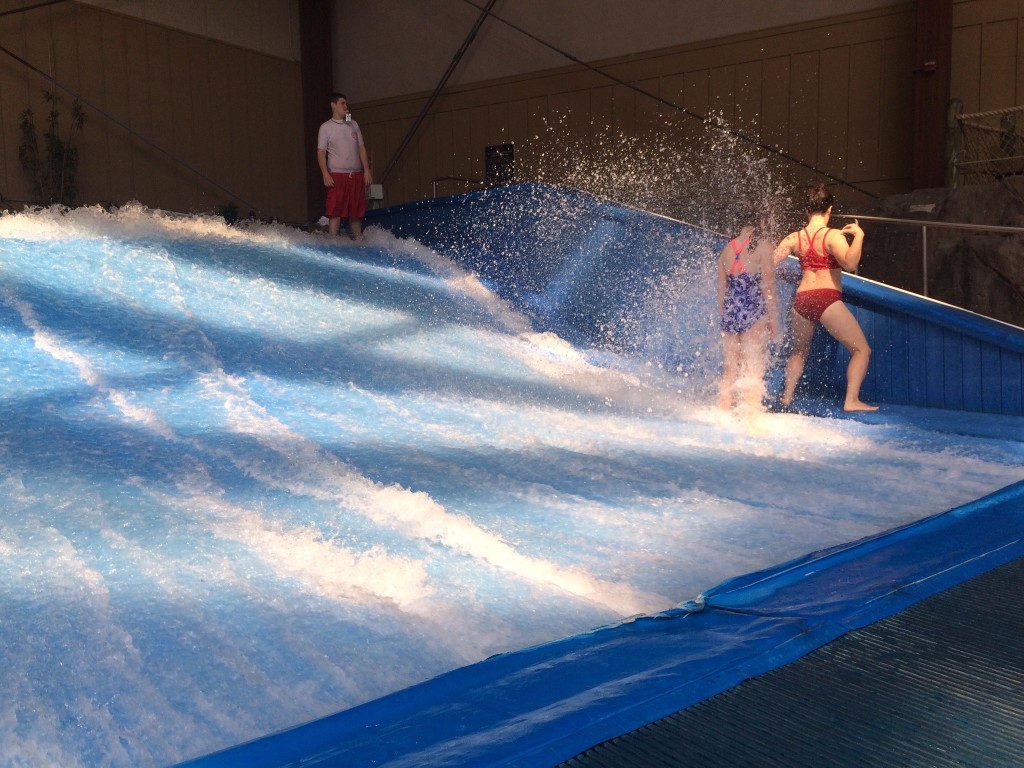 Our triumph was hers, and despite her tiny body, Irena packed a lot of knowledge and held us both up with her hands. Her face lit up as Ave moved toward her first run at moving along the waves upright. 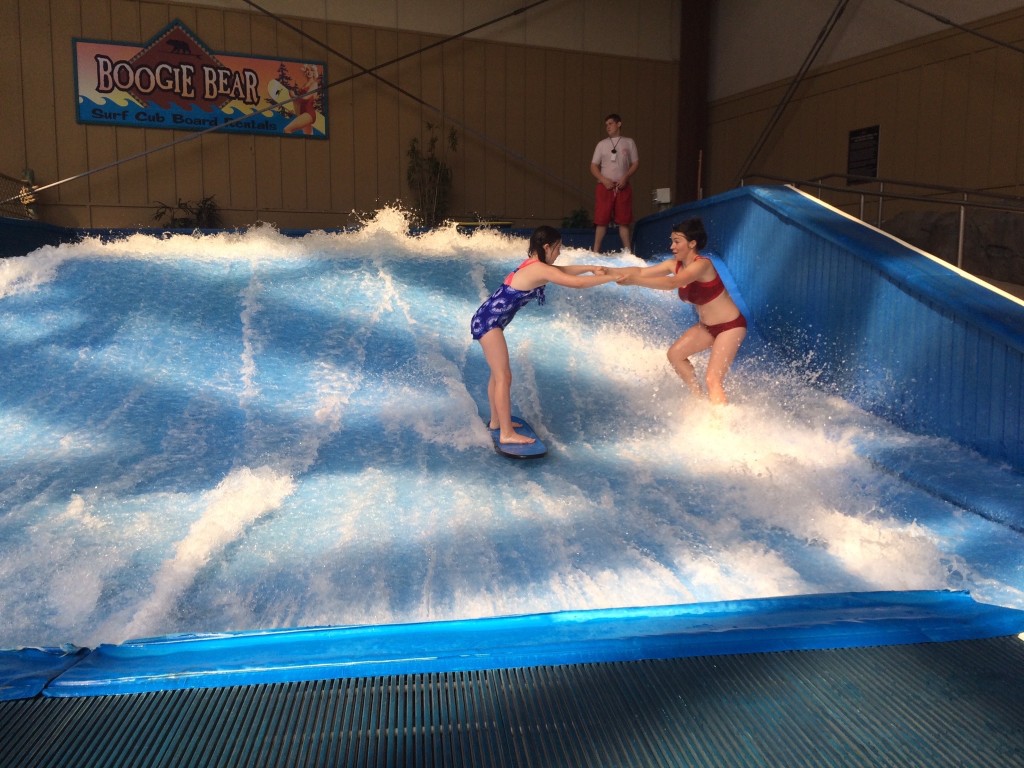 Our second instructor, whose name I didn’t catch, was equally tender with Ave, keeping her safe, but encouraging her along enough that she pushed the boundaries of what she could do.

Video of finding her feet on the waves

Snapping her picture and waving thumbs up felt radically different with the dull ache in my neck and the smarting section of backside that was still red from my last wipe out. I could see in Ave’s eyes a slightly different twinkle, a conspiratorial element. She walked toward me and said, “Good job, mom, but I totally stayed up longer than you.”

She was right, but like the obstacle course on the playground the other day, none of it was about who was wrong or right, or who had done everything better, it was simply an acknowledgement that we’d both done something.

Eliminating that judgement and stripping it down to the enjoyment was refreshing. I don’t want to be preachy, but I do want to be clear what I know on this unremarkable Saturday in which I flashed my left breast at strangers and completely failed to master a new skill: none of it matters. It doesn’t matter if we post selfies or espouse a vegan diet. It doesn’t matter if we boast about our spouses or rant about politics. This life, your life and mine, it’s meant to be lived and, hopefully, loved.

You get to do what you want to do as long as it doesn’t hurt anyone. You can choose to sit on the sidelines or dive in, one isn’t better than the other, but they are different. It can feel good to try something new, my only caveat is that you might want to wear a rash guard 😉 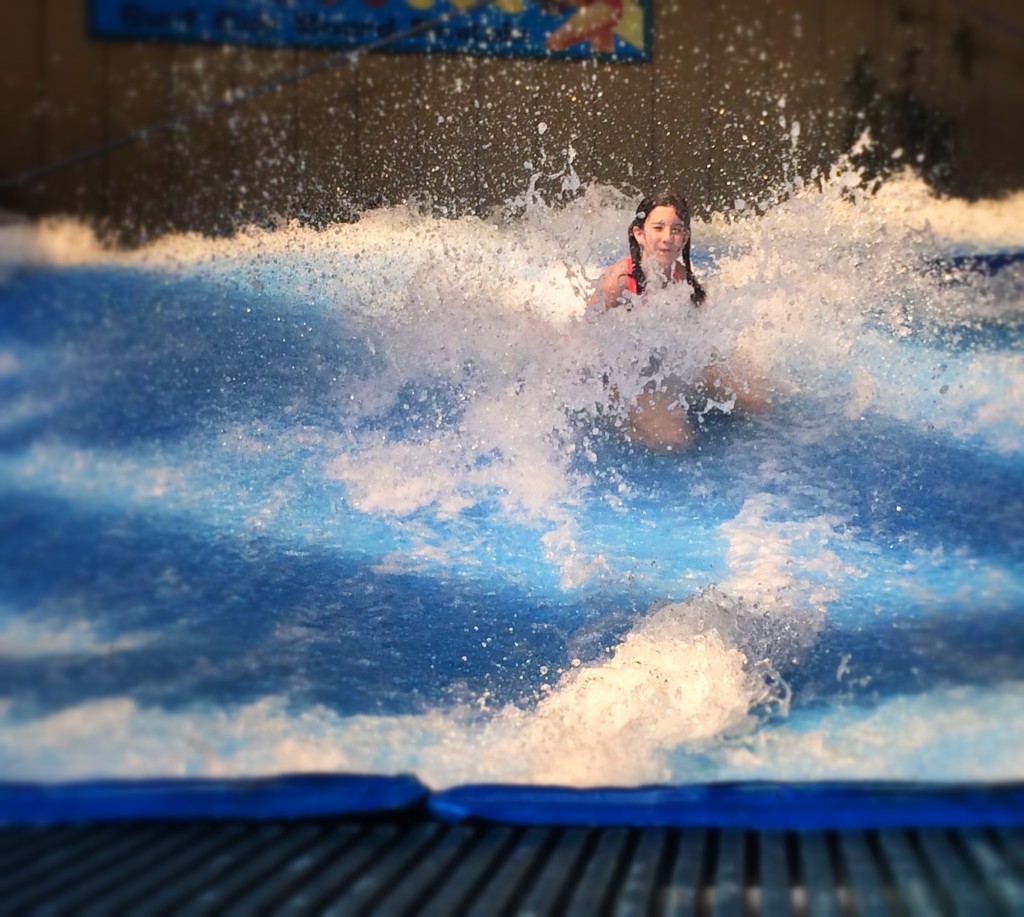 Thank you to Sara Mannix and the Great Escape Lodge for a Saturday morning of awesome. And to my kid, for being such a daredevil. You inspire me, Ave.