Early this spring I saw a flyer for a STEM camp called Camp Invention. The description invited kids from kindergarten through 6th grade to participate. My heart leapt thinking that it would be something that the girls could do together, maybe the last opportunity of its kind. I signed them up and stuck the flyer on the fridge.

When camp finally rolled around the edges of our patchwork schedule were frayed and worn. The Sunday before camp I hastily read the list of things to bring. Each girl needed one take apart item, which needed to be an electronic device that was not a cell phone or a camera. They also needed a bag of things for up-cycling. I banged around the house and found two iPod docking station, alarm clock radio type things. I also found a small toy that you put on your ankle and swing around your leg to make it light up like an old Simon game.

The up-cycling bags were overflowing with yarn, feathers, beads, and plastic caps and jugs. I was clearly not in a very STEM mindset, it looked more like they were going to a costume-making camp. I shrugged and tossed in a metal car and a few bolts.

When we arrived at camp there were few familiar faces. I assured them it would be fine, reminding the girls that they’d have each other and could work together. The first counselor we met told us that kids were divided by age and that the girls would each be in a different group. Their shoulders slumped.

I took a deep breath as I watched Finley’s lip tremble and Briar’s nose wrinkle. Ave look stunned. “Well, let’s find your tables,” I said as the girls were given group color assignments-Fin was red, Ave was yellow, Bri was blue. I scanned the room. There was no order to who was sitting where. I looked for the table with the most red badges, from what I could tell there were no girls wearing red badges.

The girls were silent, timid, and shared an expression of near panic. “Are you guys ok?” I asked.

No nods, just blank stares around the room. I winced. “Ok, well why don’t you all sit over here and wait to hear what they tell you to do,” I said. A counselor walked over, her long ponytail swishing. “Hey girls! You ready to create?” They looked at her, forgetting to nod they were so nervous. I smiled at her, “They thought they’d be in one group.”

She smiled back at me. “I think they have to be a part, but we’ll have fun. What are your names girls?” They quietly told her their names and she exclaimed over how sweet they were. I thanked her, hugged the girls, and told them to have a great day.

Fin’s face was still one of terror, but as she often does, she steeled herself to get through it. I teetered on scooping them up and forsaking the money paid, in order to stop the sensation of leaving them in the midst of something they hadn’t wanted, a camp that I’d pushed.

I swallowed hard and blew a kiss before walking out the door and crying in the parking lot.

Lately it seems like parenting is an endless tangle of moments that threaten to make me cave, redirecting and taking the route that seems easier in the moment. Mostly, I think I am managing to override the allure of the easier route, except last night when I ordered Chinese food.

Each day at camp was easier than the last and each afternoon they regaled me with the experiments and ‘figuring stuff out’ activities that they did. Fin brought home little paper airplanes made from origami paper each day. She called them her crochets despite Ave’s attempts to correct her.

“Watch my crochets fly!” she’d chirp as she sent them soaring and twisting into the air ahead of her. They were delightful, bright-colored little things and they reminded me very much of the girls and this summer. A hodgepodge of activities, unexpected turns, and always bright colors and flight.

Finley was indeed the only girl in her group. She never once complained about it. 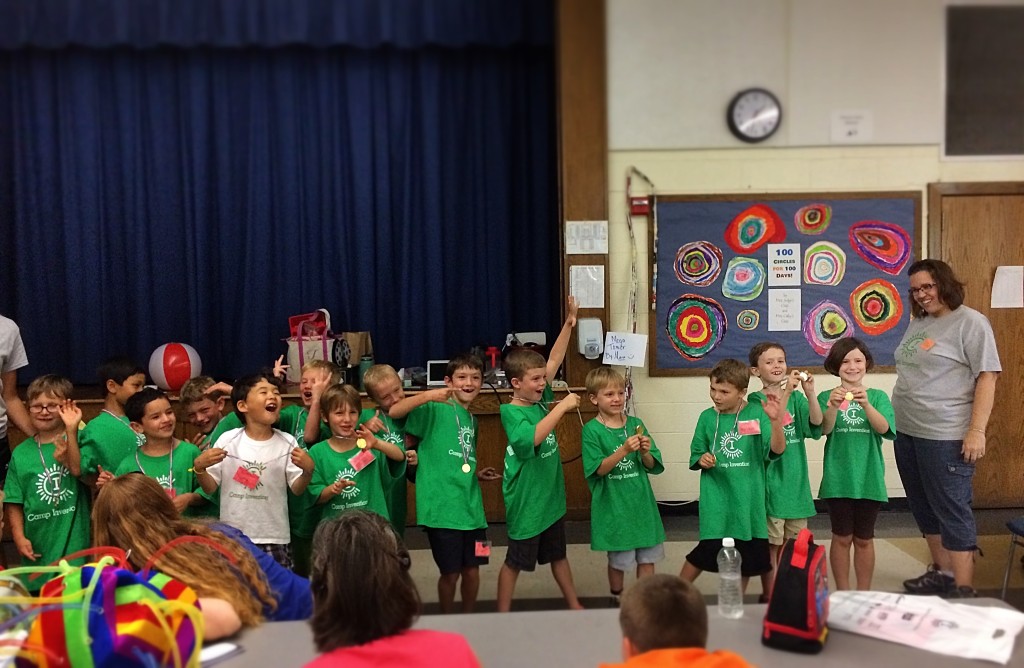 Avery and her group were so firmly situated in 9dom, not yet having the resistance to embarrass themselves through over-exuberance in the way that the older group was, not quite as goofy as the youngest kids, but all speed, competition, and ‘we rock.’ It was a beautiful thing to witness, this complete absence of anything but complete devotion and celebration of the tasks at hand. 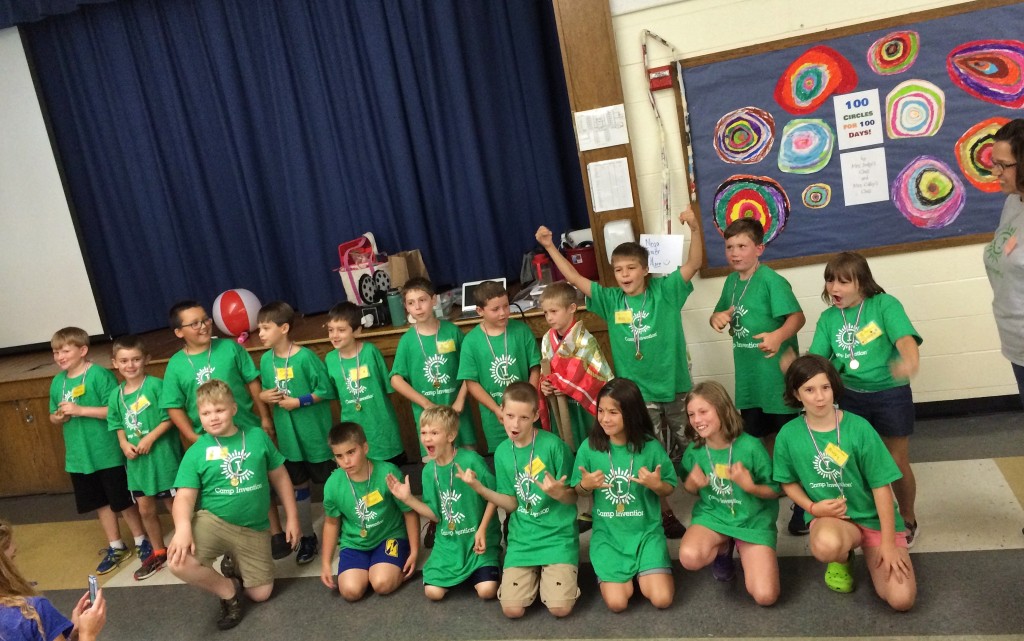 Briar’s luminosity caught me off guard. She is inquisitive and dreamy, traits I don’t think she’ll ever outgrow, but she is fully illuminated by the explosion of tween girl. Razor sharp wit, dancing eyes, and quirky confidence. Her Parkour course made of buttons and clay caught me off guard. “You know about Parkour?” I asked.

“Sure, and the intensity of the course builds to light this switch.” 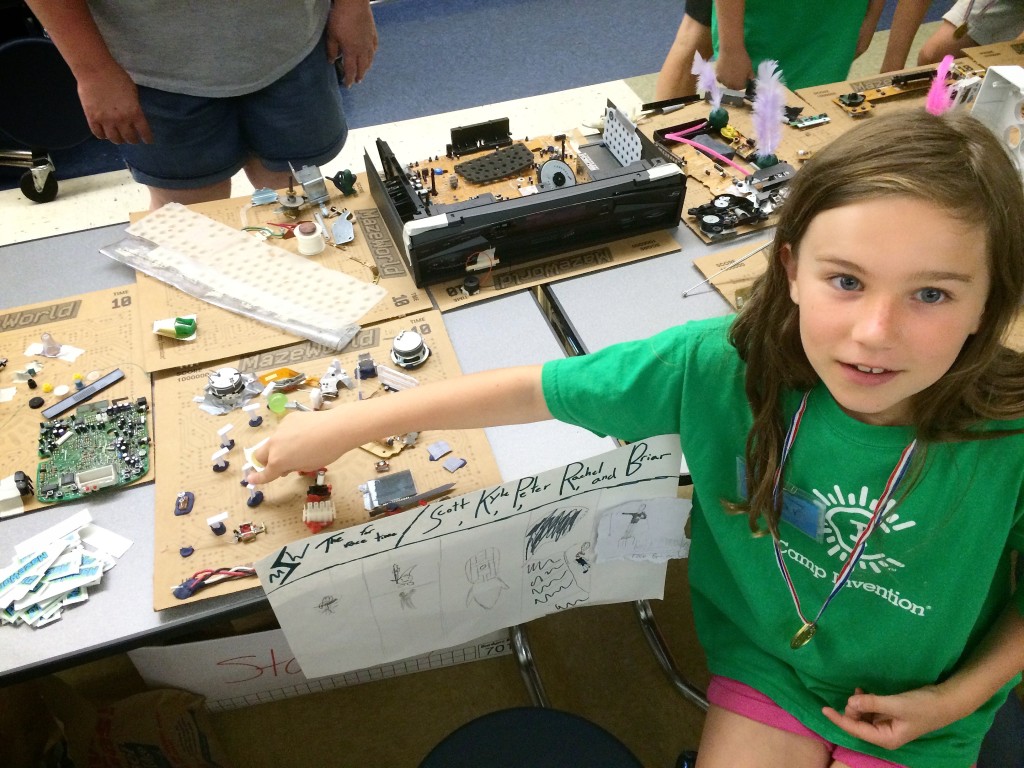 When it was time to see Finley’s course I watched as her little fingers arranged the wire on a battery set on its side to illuminate the tiny light bulb. I slowly recognized the pieces on her course as having been a part of the ankle toy and even a thing or two from the iPod docking station. “Hang on, I just gotta wiggle it here and then boom, see? Light!” She explained the pieces, “And that black thing? That I just randomly found and saw that it literally fit perfectly in the circle in my template. I don’t know what it does, but I had to glue that perfect fit.” She shrugged and smiled. 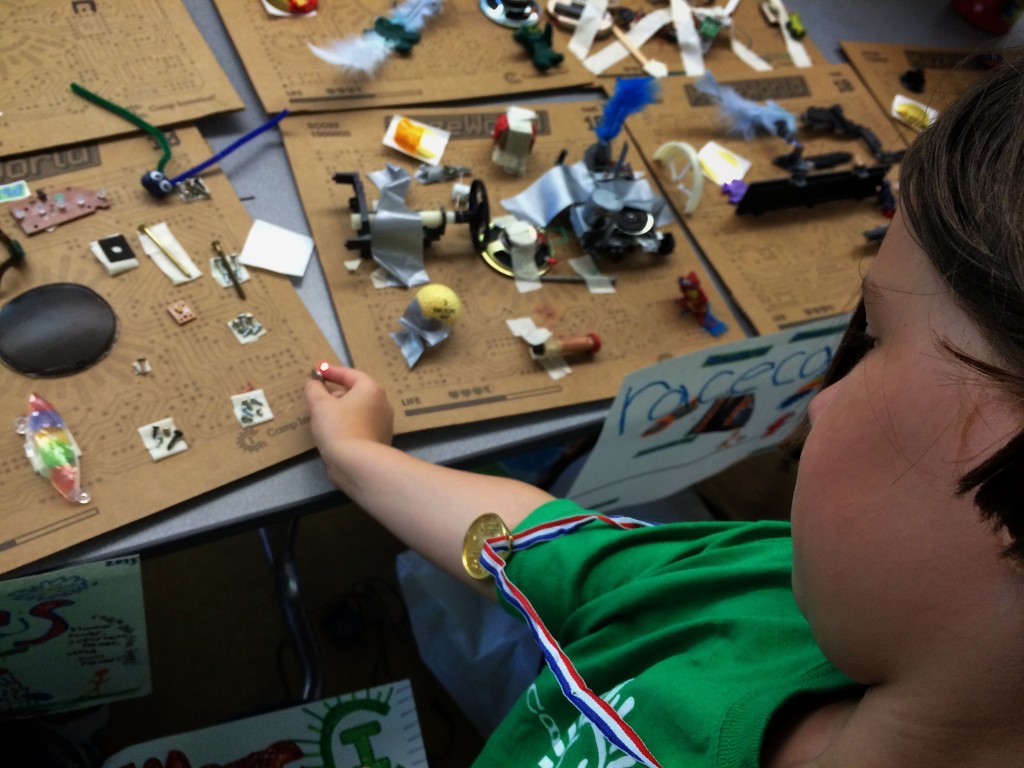 It’s been close to a week and they are still putting objects together and declaring how they might solve problems or make life easier. Breathing tubes, readers for water in soil, the ideas keep coming. It’s funny, as I look back I can remember signing them up to be together and to have fun, I never imagined that what would happen is that they’d connect with their own imaginations and unlock a curiosity and can-do approach to everything.

Camp Invention turned out to be a kind of reinvention and the experience taught us all how much we are capable of going just by trying.