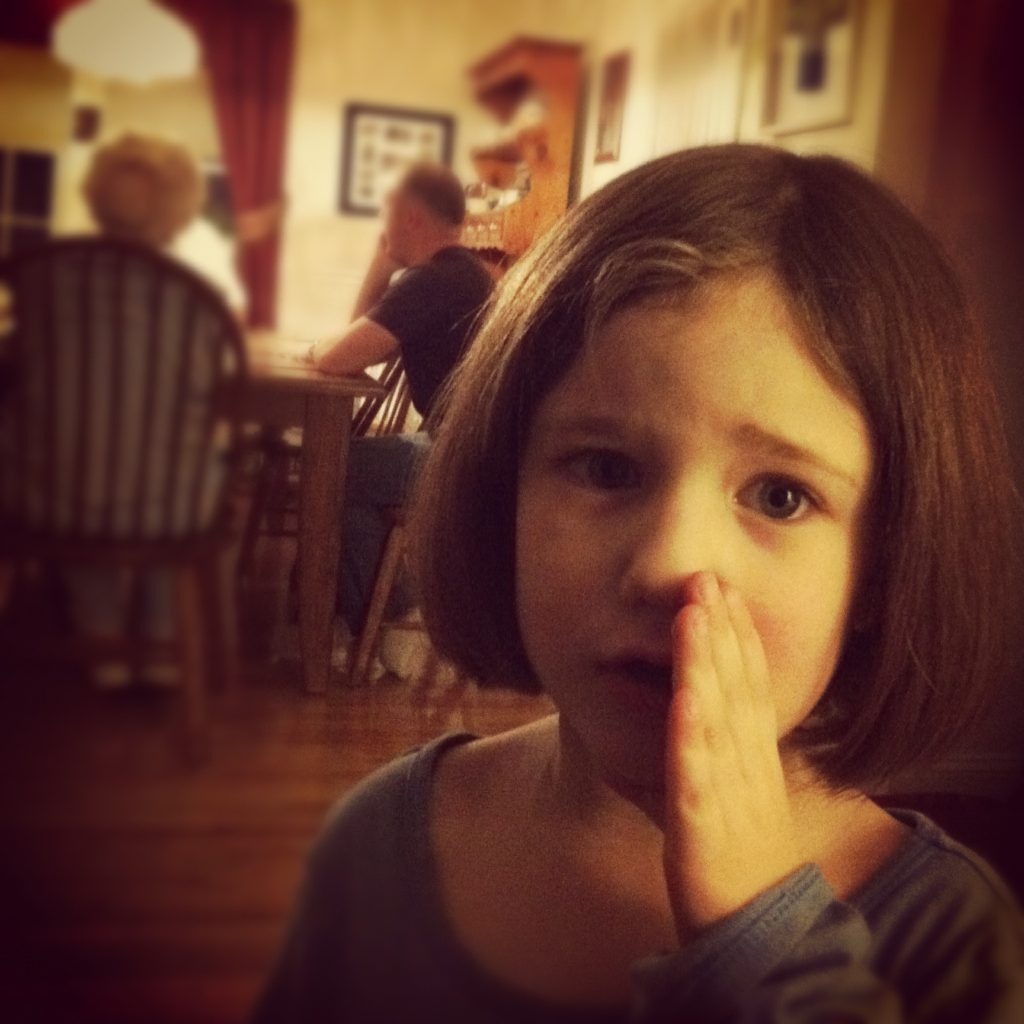 As we walked through the furniture store Finley lagged behind. I slowed my gait and listened for her, wanting to allow her the feeling of being able to go at her own pace, while also staying close enough that I didn’t lose her.

Sean and I were discussing chair colors when I saw her leaning against the wall, her lower lip was trembling. I walked over to her.

She shook her head and bit her lip. I knelt down, “You ok?”

“I was standing in the store and there was a bunny or a squirrel with a gun in its hand pointed at me,” she started to cry. We walked over to the creature, which was indeed a taxidermy squirrel with a mini-shotgun in its claw. I whispered, “I think that’s kind of awful. I understand how you felt. That one isn’t going to hurt you, but I am glad it made you uncomfortable. Trust that instinct.”

We are vehemently anti-gun in our house. I respect the right of others to have guns, but playdate planning begins with, “Do you keep guns in your home?” I haven’t had anyone answer yes, but my plan if they do is to say that we’d be happy to host a playdate, but that our kids won’t be playing in a house with guns. It is a strong position, but it’s one on which I won’t budge.

We’ve talked with the girls about what to do if someone offers to show them a gun. Say a cheerful but firm, “No thanks” and what to do if someone goes to get a gun: Leave. We also went over what to do if someone shows them a gun, say “I can’t be around guns” and then leave. My mom’s cousin was shot dead in the back by her boyfriend. I was at a house party where my date’s “best friend” pinned him to the ground with his foot and held a shotgun to his head. When I can, I don’t want to leave room for doubt.

Guns are becoming a part of our day-to-day life that I cannot control. The political discussions online immediately spiral into name-calling, politicians seem bound by scripts that are immune to outside input, and people keep dying.

Ever since Newtown it has gotten harder and harder to know which news stories to talk to the girls about and which to let go by as “too much too soon.” More often than I would have imagined the girls come home having heard about something I didn’t talk to them about, from ISIS to the Zika virus. I have no problem with them hearing about the world we live in, the part that troubles me is when someone else frames the story for them; Donald Trump is a perfect example.

“People say he tells that truth,” they said, “And that Hillary is mouthy.”

“I saw a bumper sticker that said, ‘Trump that bitch’. How is it ok to swear for politics?”

Other times I ask if they have heard about police brutality or white supremacy and they look at me blankly, those headlines not even a ripple in the conversations at school.

We don’t have it figured out, but we do have issues that for our family are important. Lately we’ve talked a lot about women’s rights and gun control, and when it comes to gay rights we always talk with them. Three years ago we were preparing for their Nana’s wedding. The girls were brimming with excitement as they prepared to sing, “Marry Me” and plotted the colorful bracelets they would wear.

“You can be flower girls and you can wear fancy dresses,” we said laughing. “One more thing girls, we are all happy about this, but not everyone thinks it’s ok for two women to get married. If you ever have questions or if someone says something mean, you can talk to us.”

I felt funny telling the girls not everyone believed in marriage equality, but I didn’t want them to be caught off guard. I believe that a part of our responsibility in raising informed and compassionate human beings is to illuminate the full range of opinions on subjects. The wedding was a beautiful affair, full of joy and acceptance, but there was the tiniest tickle of a held breath. Being gay is not safe, acceptance, or even tolerance, isn’t promised, and there is still so much hate.

I explained to the girls what happened in Orlando. “The other night a lot of people went to a place to dance. It’s a place where gay people can go and dance with each other.”

I stammered, “I think mostly men, but women too.” They nodded, ready to hear more.

“A man went to this place and he killed 50 people. There are 53 more who are very badly hurt,” I said as I scanned their faces.

“Because the people were gay. He didn’t think they deserved to be alive.”

“He killed them for being gay?”

The girls were silent until Briar said, “Nana and Jeannie?”

Finley said, “Did he kill them?”

“Will they? Will somebody kill them for loving each other?” Finley asked.

“No. I don’t think so, but what I need you to know is that there are people who hate. I am sad, but I am happiest that we don’t hate in this family.”

Briar tilted her head, “How old was the man? The man who killed them?”

“That is such a waste. I remember when I was like 4 and we were going to Deb’s house and you told me about the two men loving each other. I was confused, I was thinking ‘two men?” but now I am almost 12 and I know gay is ok. I mean he should know by 29 how to understand it. You can’t kill it. I mean, he killed them, but he didn’t kill gayness. You can’t kill love,” she explained.

I had nothing to add. I just nodded. After a few minutes I said, “I don’t know what you’ll hear at school tomorrow. You don’t have to talk to anyone and if you have any questions you can ask me. I do want you to know that there are good people too. Right now there are lines of people who don’t hate gay people and they are lining up to give blood.”

Finley said, “Why would they give blood?” Sean and I explained that when people lose blood they need it replaced.

“Will you give blood?” she asked me.

“Can I love all the gay people without giving blood?” Finley asked. We chuckled softly.

“You’re too young to give blood.”

“Not too young to love gay people and really, really not like people who kill.” She nodded her head and looked at us.

What do you say to that? She was right.

We try to define right and wrong without bias, but inevitably it is there; I hope that I err on the side of compassion. We strive to send our girls out into that world with the message that hate is not an answer, love is not a crime, disagreeing doesn’t mean killing, and that ultimately reason will triumph.

I didn’t know what to say to them when the US Senate failed to agree that exploring the way we regulate guns isn’t something they were willing to do.

“But why? We all have rules. What are they doing instead?” I had no answer.

Hours ago Democrats staged a sit-in on the House of Representatives floor demanding a vote on gun control. They were called “childish” by some for “halting the political process.” Representative John Lewis, one of the organizers, said, “By sitting down we are really standing up for the very best in American tradition.”

As I try to explain our world to the girls, I can’t help but think that demanding that our elected officials do everything in their power to ensure that Americans are as safe as they can be is the most important thing.

I believe the right to feel safe does not belong solely to people who feel safer with guns. There must be a middle ground.

I will continue to demand that families like mine have a voice in the gun debate.