You Know Best, But Do You?

A couple of years ago I noticed a bump on my hip. The shallow secret is that when I first saw it, I thought it was that I had lost weight and it was a bone that could be seen. The hollow-eyed, calorie-counting, laxative-popping, over-exercising girl that I was for a few years in college got excited. The addiction to weight-loss and control whispered in my ear, “You’re doing it, keep going.” I pushed that thought aside because I knew it wasn’t safe. I can’t diet like some people, when I begin to eliminate certain foods or to count calories I am right back on the high wire which takes perspective away putting me at risk.

I was in a health center getting checked for something and I said to the nurse practitioner, “What do you think this lump on my hip is?” She pressed her hands along my hip and said, “That’s just a part of your body.” I kept asking people, from my family, to other medical practitioners and fitness professionals. No one knew and their response was always more curious than alarmed.

Over the past year I have begun to establish myself with a Nurse Practitioner, named Jackie, for my primary care. I trust her and as a result of that I am managing my stress better and really considering the value of my own health as it pertains to my family and my work. My cheeks flush that I needed someone else to make me a priority, but it did.

“Can you take a look at my hip?” I asked her. It was about 3 months ago. She called another doctor in, who like everyone else kind of raised his eyebrows. She ordered an ultrasound. The ultrasound person said, “There is definitely something in there that doesn’t belong. I am going to recommend an MRI.”

They put me in the MRI chamber (I don’t know if that’s the right term, all I know is that the 45 minutes I spent in it pressed every claustrophobic button I had).The next day I got a call that I needed to go for a biopsy. My hip lump had everyone puzzled. I rubbed the egg-sized protrusion through my skirt as I was given directions to the surgical center. An hour later I got a call from Jackie.

“I shared your films with a friend of mine who is an oncologist at the hospital.” Cue all the terror. I was standing in the middle of the office and I felt dizzy. “He thinks you should forgo the biopsy and go straight to an orthopedic oncologist in Albany.” I was quiet. “Are you ok?” she asked. I wasn’t. I was legitimately terrified into a mute state.

The next hour was a whirlwind of phone calls and scheduling. The specialist was leaving for a two week vacation so they shoehorned me in the next day. I had to reschedule a meeting and postpone something I had promised the girls. That night Sean had a stomach bug that was so violent he burst vessels in his eyes and could barely move from the fetal position. The girls were needy, I felt guilty for leaving. Sean insisted on getting dressed in slacks and a tie and accompanying me and my mom on the 45 minute drive to the appointment. He moaned in the back seat.

I have been incredibly lucky to have very little need to see specialists or spend time in hospitals, which is to say that I was pretty terrified being in such a place. It reminded me of being in a plane and realizing how very tiny I am and how little beyond my own emotions is within my control.

More than 2 years, I thought.

Two years I let whatever this thing is fester inside of me.

Everyone had said that the slow growth was a good sign, but I felt pummeled by the message I’d been sending over the years, which was “My health is secondary to everything else.”

“Have you seen the screens?” the doctor asked me. I shook my head. “Come on, let me show you.” We walked around a corner, the people in the hallway moved out of his way. I walked toward the illuminated rectangle and stared. He traced the oval shape and explained that it seemed straight forward, then he rotated the image and the oval shape split and snaked around something else. “It’s almost like a tail woven in your gluteal muscles.”

I didn’t know what to say. I think Sean asked a question, then we walked back to the exam room. I appreciated that the doctor got right to the point, “We can biopsy it, that will either tell us it’s benign or malignant, the only difference in approach would be with the latter we might radiate you before surgery. No matter what you are going to want it out, right?” I nodded. “I say we put you on the schedule to have it removed at Albany Med, rather than here in my practice. That way it can go straight to pathology, but I am 90% certain we’re talking about a benign growth.”

I had to wait three weeks, three weeks and two years really, because I didn’t even let myself rate as far as prioritization of need. I can get two daughters to orthodontist appointments, all three girls to the eye doctor, they take voice lessons and go to camp. I match socks and rinse the recycling bin with more focus and dedication than I give my own health. I clucked my tongue and committed to not spiraling into a storm of what ifs.

Driving down for surgery the fear finally came. Tears leapt from the corners of my eyes and I tried to take deep breaths. I only allowed it for about two minutes, then I shifted into a positive place and decided to keep that approach straight through to being discharged. I joked with the nurses, let Sean crack me up about how I looked in the surgical hat, said yes to heated blankets and imagined I was a self-satisfied house cat. Sean sat with me and as the anesthesiologists walked toward me I understood how very fragile every minute really is—how fragile we are and how the decisions we make, and even the decisions we don’t, actively steer us toward one thing or another. They had me remove my wedding ring and say goodbye to Sean. 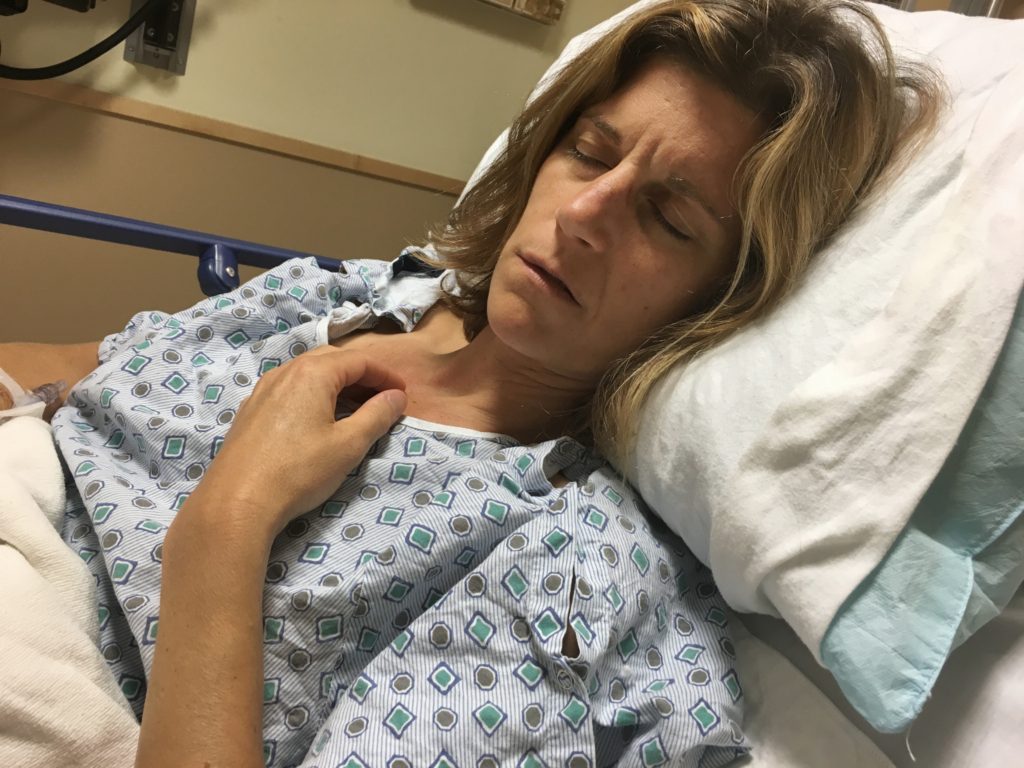 The tumor was removed Tuesday. My mom and FAB have been incredible caretakers, along with my mother-in-law and our cats. Sean tries to hide it, but I catch him looking at me with the vastness of what the worst case scenario could hold. The most generous thing I can do for him, for the rest of my family, and for myself is to slow the eff down. I take the pain pills and drink the water, I stay prone in bed, I don’t dive into work emails or fixing the world. 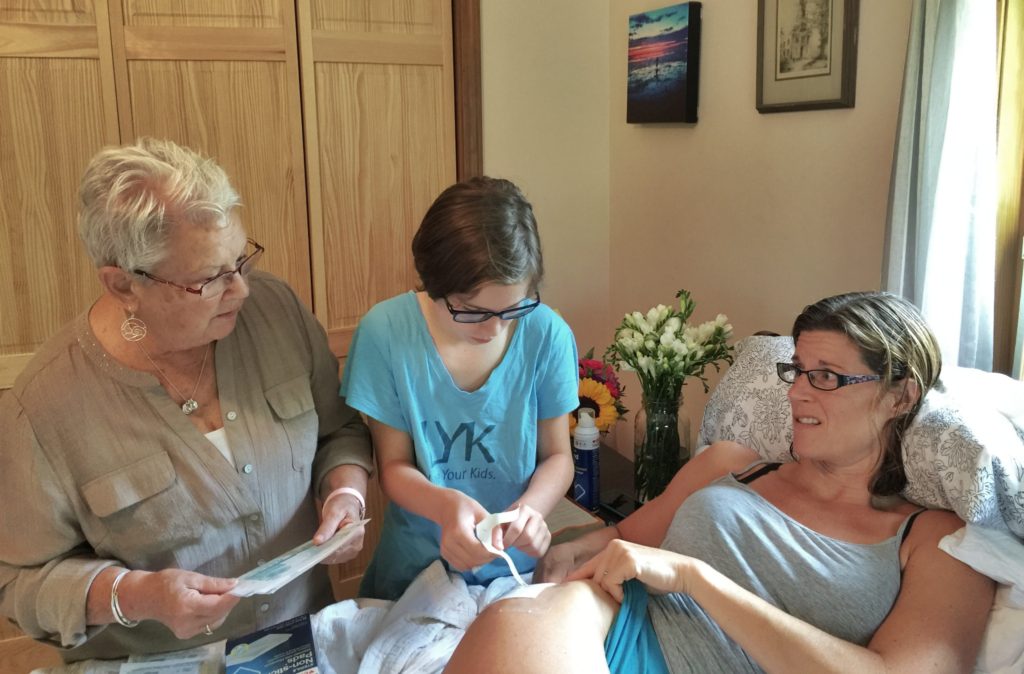 I have about a 5inch long wound. We’ll find out at my follow up appointment a week from today if it is benign or some form of sarcoma. I’m still believing in the best, but I will say that as my world has been peppered with words like mass and malignancy, growth and excision, I see how my indifference to my own health has been a threat in and of itself.

I need to pay attention. I need to care. I have to treat my life with some degree of pacing that doesn’t criminalize taking time for myself.

I am grateful for this chance to reevaluate the choices I am making and what they all mean. I’m also grateful for the people who have written and asked me if I’m ok. It was not my intent to turn this into something big, but if you are out there trucking along like I was, handling everything but yourself stop.

Make the appointment. Ask the question. Do the things you would do for the people you love, you are every bit as deserving of care as they are. You might be surprised by just how much your family wants to and is able to do for you. 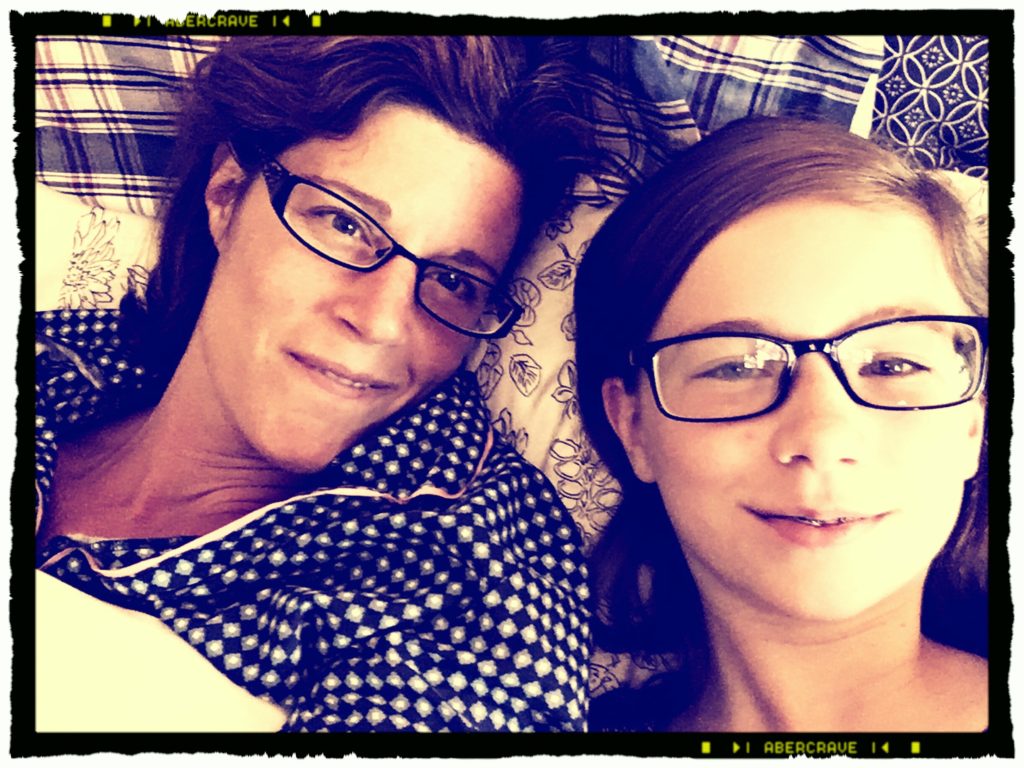