I remember reading the newspaper headline about River Phoenix. I never once thought, “This took too long for me to find out.” As the idols of my youth die and friends post about broken bones and their parents’ dying, I realize I am old, old enough to be able to anticipate that people I have known or loved will be dying.

George Michael, Prince, Michael Jackson, none of them perfect, but oh, the spaces they held in my life—the guy who blasted Father Figure on a first date with me, “This makes me think of the girl who is pregnant with my kid” or Michael Jackson for just being so different and not making me feel like a misfit for not looking like a girl from a music video. I forget just how much they mean until I find how quickly their music transports me from now to that time or how a shared fondness of them can make me feel a kinship with a perfect stranger.

I was in the grocery store in a tiny Vermont town away from work, just trying to check what time it was this afternoon when an alert from the Huffington Post flashed across my screen confirming the death of Carrie Fisher. I’d kind of known, but hoped against hope I was wrong. These last few days have taken me back to the virtual vigil I kept for Natasha Richardson or the way I could not wrap my mind around Phillip Seymour Hoffman being gone. I literally spent days reliving the discovery that he was gone, never to grace the screen again with his scruffy and relentlessly compelling ways.

The non-celebrities, the son of my childhood friend, the men from my hometown who commit suicide, the classmate changing a stranger’s tire on New Year’s Eve struck by a car. Each time I reeled, promising to remember and to be more aware of how not a single moment is promised. I watched the world go on and felt indignation that things didn’t slow down or that the crap in the world didn’t miraculously resolve itself.

I scanned social media feeds and saw people leaping to judgement, someone wasn’t a real fan for not appreciating the non-top 40 hits or someone didn’t deserve to mourn because they never knew the person.

I readily admit that I am still figuring stuff out, but something has become clearer and clearer for me—

We get to feel.

I can judge someone for being vocal or ‘going on and on,’ but what a colossal waste of time. If there is something I think the world can handle in any volume it’s the reverence of a life no longer. Mourn, remember, wonder aloud, feel all the feels for as long as you need. If someone else’s emotions get you feeling something, look at yourself. I’ve done it. Why do I care how someone else processes? Why am I feeling this way? I’ve done it over writing contests, parties I wasn’t invited to, and people who’ve knowingly betrayed me. Them’s the breaks. I can dwell and rant, but as the saying goes, “Holding onto anger is like drinking poison and expecting the other person to die.” If anything, grief humanizes us. 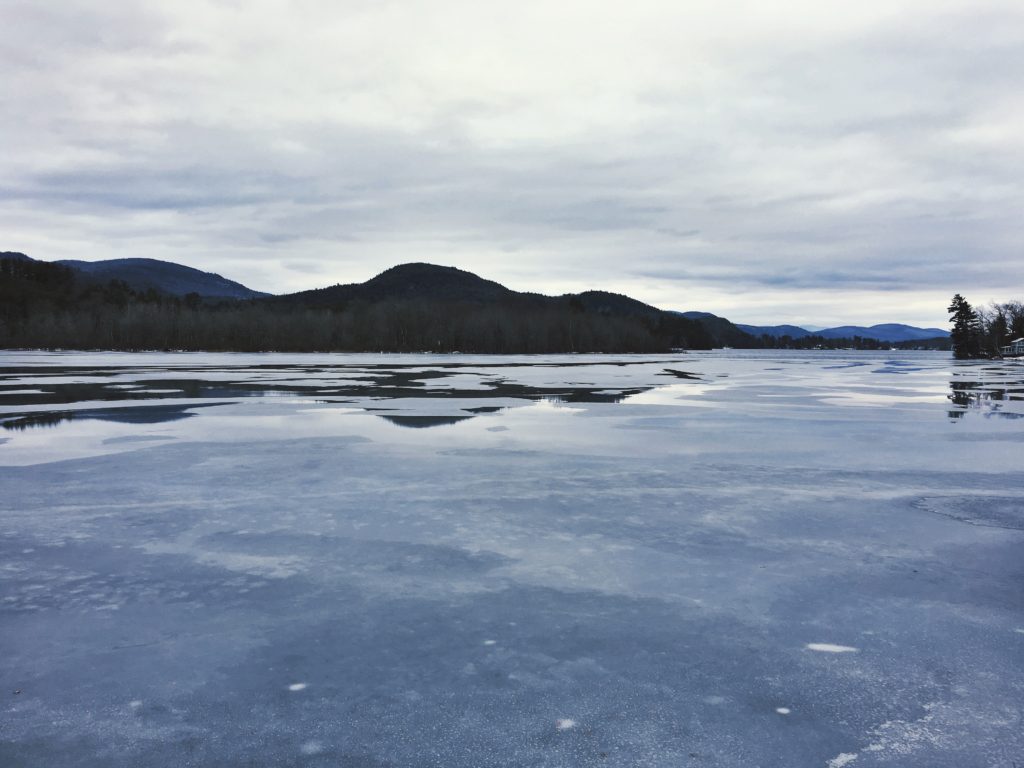 This afternoon I took a walk with the girls and surveyed the lake. It’s amazing to watch the transformation from swimmable body of water, to icy plane. It’s not yet there, the lake is still fighting itself, freezing over and fighting the current from the channel, wide expanses of ice collide with gnarly chunks of ice and open water. It reminds me of the cycle I go through each year, putting the 12 months to bed and looking toward the next 12. It always strikes me as odd that we wait to make resolutions, but I’m guilty of it myself. The water made me think about death and renewal, the necessary turning over and redefining—water to ice, inviting to imposing, fluid to solid.

As I looked out at the water and ice, sections of slush and areas of ice covered by last night’s rain, I realized that it’s natural, even the fight. I may struggle to articulate why George Michael meant so much to me and why I wanted Carrie Fisher to rally, and I may bristle at the people saying there are more important things to mourn, but in the end it’s ok.

There isn’t anything anyone could say to change how clearly certain songs play in my memory or to alter how significant a role someone I never met played in what I believed I could do. We get to live how we want and we get to handle our feelings when someone dies in the way that makes sense to us.

Upon learning of his terminal cancer diagnosis, Oliver Sacks wrote,

I feel a sudden clear focus and perspective. There is no time for anything inessential. I must focus on myself, my work and my friends. I shall no longer look at “NewsHour” every night. I shall no longer pay any attention to politics or arguments about global warming.

This is not indifference but detachment — I still care deeply about the Middle East, about global warming, about growing inequality, but these are no longer my business; they belong to the future. I rejoice when I meet gifted young people — even the one who biopsied and diagnosed my metastases. I feel the future is in good hands.

I echo the sentiments of many who have said that 2016 has taken everything but the trash. There have been three more deaths today that I’ve read about, and I have no doubt that 2017 will bring more incomprehensible, senseless, early, and devastating deaths. My hope is that I can muster the wherewithal to recognize the people I love, though we may be out of touch, and honor what and who has mattered in my life. I also hope that I can demonstrate the capacity to afford other people the time and space they need to grieve, whether it’s a person or a personal milestone they hoped to achieve.

Dying is a part of living, may we be humane in how we witness how others manage it.