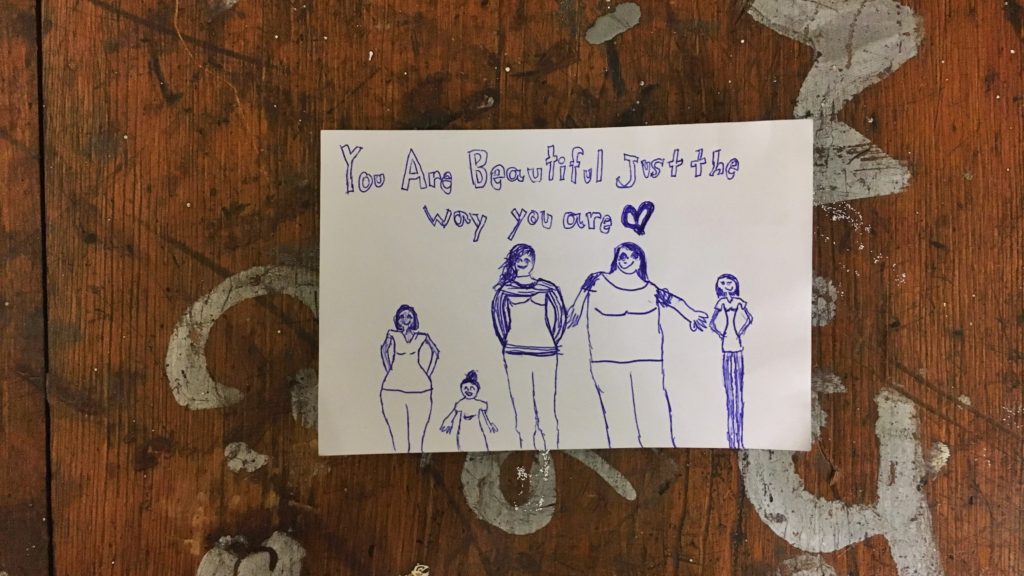 A week ago we went to see the movie “Embrace—Your body, the movement, global change”. I watched the promotion of it with curiosity. It was strange for me to see a local connection to a deeply personal issue, one of the hosts was my neighbor, friends of mine were posting on Facebook that they would be attending.

I’m used to managing my demons in a private vacuum. I know there are women in my community who have battled with image and that there are abuse survivors, even closet liberals, but I’m more accustomed to finding connections on these issues through the relative safety and anonymity of the internet.

I suppose me talking about anonymity is strange as someone who has voluntarily shared great parts of my life over these last twelve years of writing online. Early on my writing did feel anonymous because no one locally read what I was writing; that has changed. I still have parts of my life that are kept for my family and me.

The themes in Embrace are deeply personal and intimate. I won’t lie, there were scenes that made me gasp audibly. Nudity, candor and a matter-of-factness to the way women’s bodies can be treated like cuts of meat to grade.

Thin women get judged for how they look, heavier women get criticized for liking themselves, older women are chastised for being sexual.

Get over it, go to the gym, eat a sandwich, cover up, dress your age.

One of the things I really valued was that Embrace wasn’t a dissection of the media making women feel bad, it was an honest depiction of various people’s lives. It does not lay blame as it portrays the different ways women feel about their bodies. It also acknowledges that men have complicated relationships with their bodies, but the focus here is on women.

I sat next to Fin, Briar was to her right, then Avery, and then Sean. We were in a booth, which felt safe. The theater was intimate and seeing faces we knew as well as people we didn’t was intense. I was proud and grateful that people in the community wanted to support this movie and participate in this conversation. As the scenes unfolded I heard weeping, I saw parents watching their children’s faces, and I saw heads nodding in agreement. At one point Finley squeezed my arm and pulled me toward her to whisper, “Mama, do you like your body?”

I’ll be honest, I didn’t know the answer. Separating years and years of not thinking I was doing enough—working out enough, eating right, moisturizing, grooming, you name it, it ran through my head. 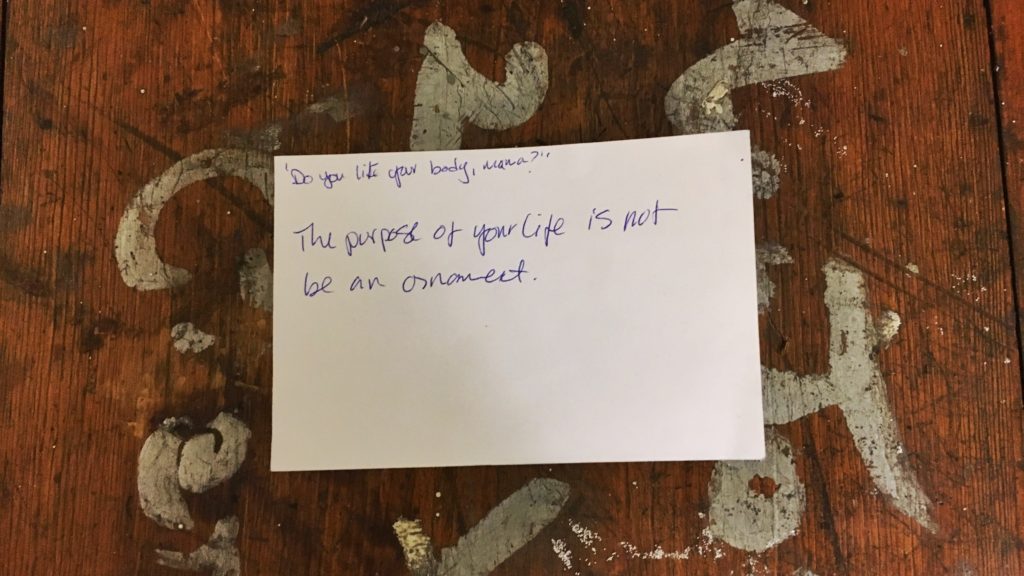 Finley asked me if I liked my body. A while later in the movie, Taryn Brumfitt said, “The purpose of your life is not to be an ornament.” I jotted both things down on the notepaper they provided.

I sat through the rest of the movie processing the idea of allowing myself to say that I like my body without qualification. It feels complicated to separate vanity, arrogance, shame, aspiration, and perception. 43 years in, I am so ready to shuck the cloak of not-good-enough. I’ve long since given up trying to understand when I put the damn thing on, I know it doesn’t suit me, nor does it help me. As much as I want to be the best parent that I can, it’s also not possible to do it for somebody else. I am trying, I think I’ll always be and that is ok.

I asked the girls after the movie how they felt. It was hard for them. We talked about Photoshop and peer pressure, and the feeling at school “that you have to do and want certain things by a certain age, but I don’t.” 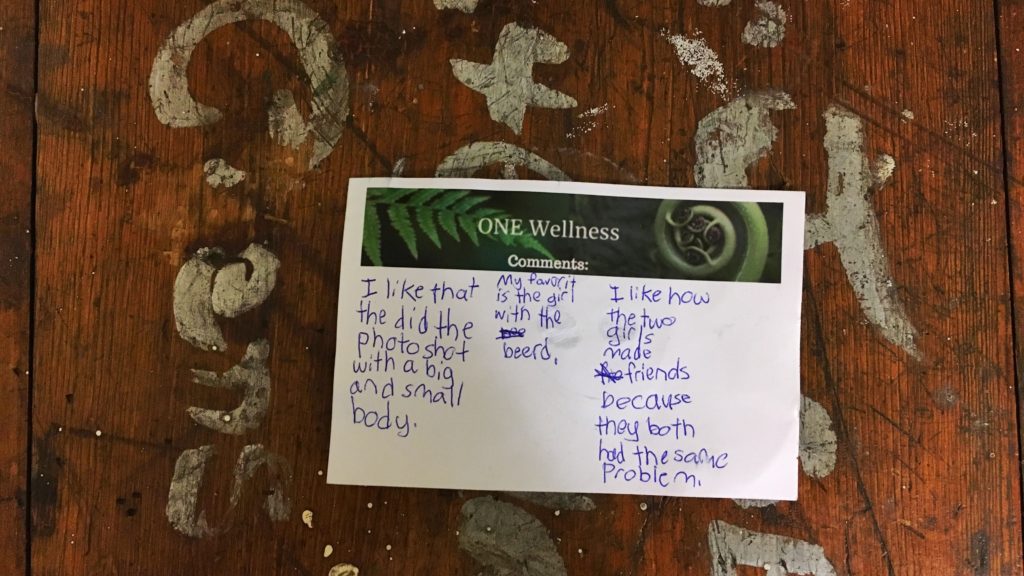 I’m not sure if I expected the movie to be some sort of magic potion that would settle things once and for all. I know that I should be kinder in how I view myself, I want the girls to not pine for “skinnier legs” and “to be small like my classmates,” but those words have already been uttered, along with, “the more athletic kids get treated differently, like the teachers like them more.”

Whether we call it girl power or self-love, I hope that we work together to understand that there is a difference between wanting to improve and wanting to be something or someone else entirely. 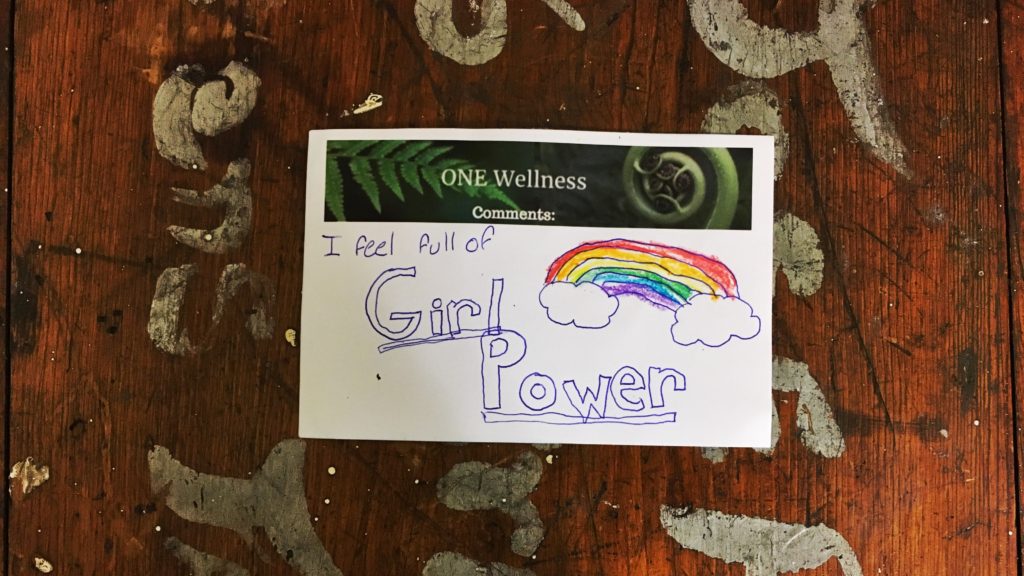