Life Isn’t the Same After #WonderWoman

Saturday afternoon I used my phone to buy seven tickets for a Sunday matinee of Wonder Woman. It was, quite honestly, a pain in the ass because the Regal app was persnickety and I didn’t have my wallet so I had to borrow a card from Sean. Sometimes this sort of thing would annoy me and send me into a “Well, I guess it isn’t meant to be” defeat. Not this time. It was too important that my contribution to the first weekend of the movie be recorded.

Talk with your wallet. Stand up for things that matter. It was the same thing with backing Rebecca Woolf’s Kickstarter campaign for Pans. I want movies made with girls in mind as more than arm candy, victims of violence, hollow foils, and set dressing.

“What do your politics or your gender have to do with a movie?”

“Everything,” I say at first in a quiet voice.

“They mean everything. It is all connected,” I spit.

“Be careful in the world of men, Diana. They do not deserve you.”

Every female character who gets stripped down and left to bleed with her breasts exposed.

Every magazine cover with a female star in underwear & her male costar in a suit.

Every twenty-something playing the love interest of a septuagenarian.

Every Piers Morgan who says we can’t show our cleavage after it stops turning him on.

Every director who tells a woman to lose weight.

Every bad action flick made without a second thought given to women.

Every girl who has to wear a pink version of a superhero costume.

Every time we are asked,”What were you wearing?”

Every President who grabs us by the pussy.

It is all so connected.

I will politicize the hell out of this. Because my politics are relevant, my body is mine, and my reality is impacted by the politics and apathy of others. I won’t ask anyone to forgive me for being shrill and I will not tolerate anyone telling me this movie didn’t matter. Legislators tell us what we can and can’t do with our bodies, schools tell us what our daughters have to wear so that they male students and teachers aren’t distracted, conferences still have booth babes. 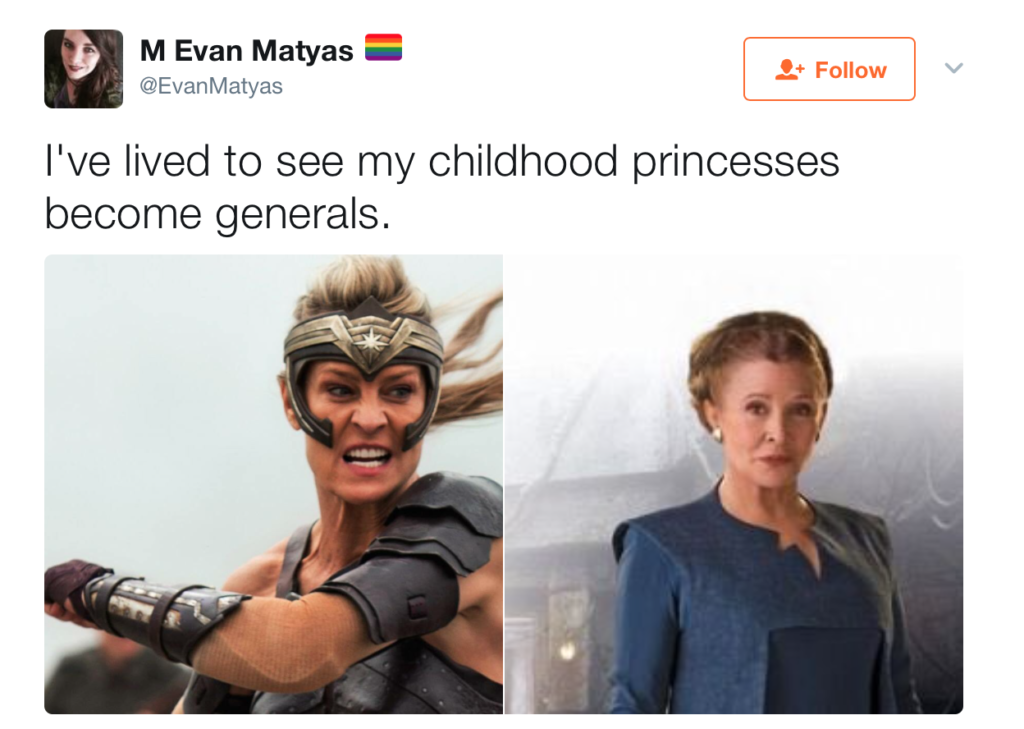 I did my best to get along with the one female action figure of my youth, vying to have Princess Leia, but sharing her with my neighbor and accepting the need to use Hans Solo or Lando Calrissian when it has her turn to have the sole female. There should have been more than one chick. It’s true that this shouldn’t be revolutionary, but it is.

Diana was not created for men. She wasn’t there to make a man look virile, she wasn’t there to be without flaws. She was human well, superhuman. But she made mistakes, blended humor and gravitas, emotion and hope. The panoramic shots of the Amazons in the early part of the movie were not overtly sexualized. Yes, their costumes were fierce, yes, their bodies were glorious. The scenes were not mash ups off writhing, oil-slicked bodies with faces blurred. It was shot after shot of strong, capable women.

There was a part of me that wanted it to start to feel normal, to not sit in complete, speechless awe of it all. I wanted it to feel less significant, but I kept thinking, “I put my hundred dollars in. I want to watch it again, want to reinforce that I am here for this.” Attending this movie felt like an act of resistance and a declaration of existence.

My throat tightened and my nose stung and I let the tears come as I watched a movie that I was proud of surrounded by my family.

Patty Jenkins did it!

Chris Pine was different. <— that may not seem like praise, but it is.

This movie was different and yet it was still able to be a seat-of-the-chair movie.

My girls have searched for costumes that weren’t mini-skirt versions of heroes. They’ve been mocked for their choices. A Black Widow, a Maleficent, and an Elsa. Tell me they aren’t all craving strong female role models. Yet the stores don’t carry Black Widow dolls, we made the Maleficent costume and because I can’t sew a mini-dress was the only option. 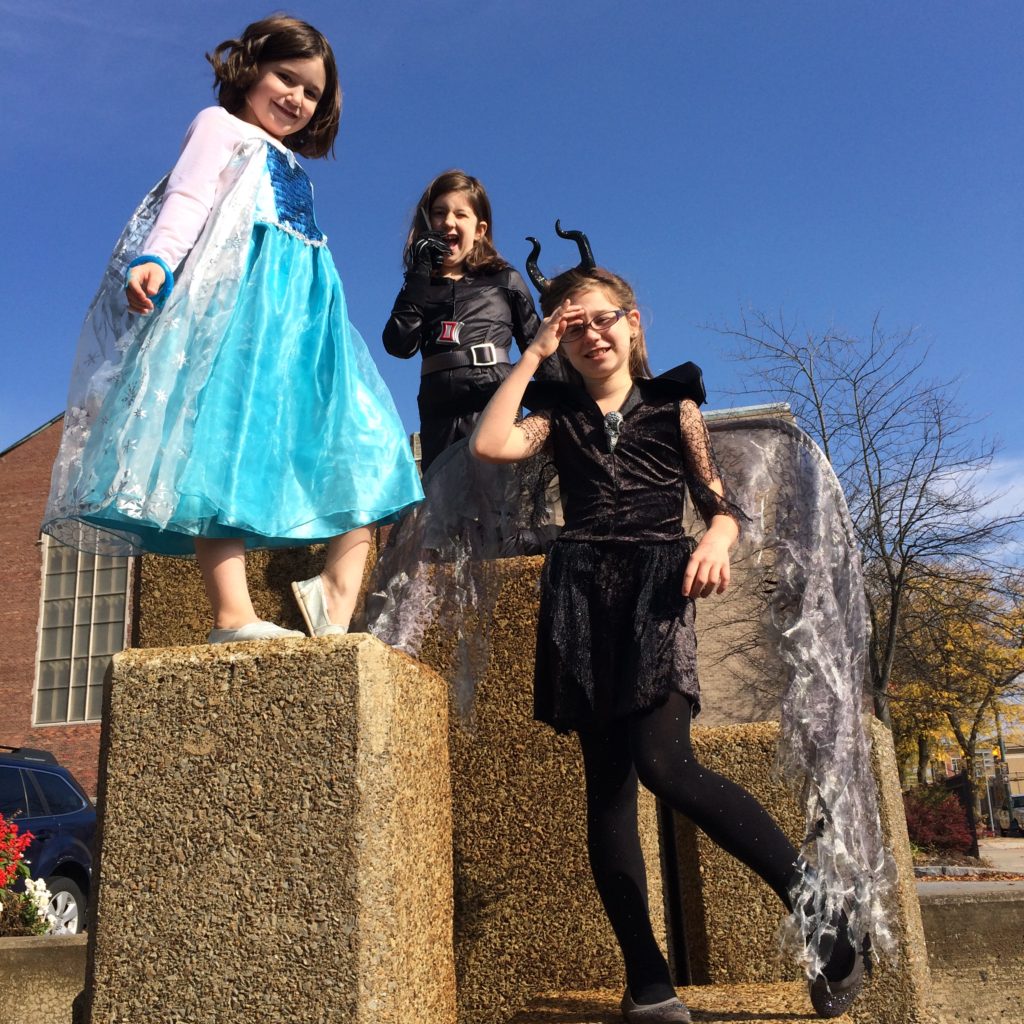 “I feel that I’ve got the opportunity to set a great role model for girls to look up to a strong, active, compassionate, loving, positive woman and I think it’s so important,” Gadot told the magazine. “It’s about time that somebody will do that and I’m very privileged and honored to be the one.”

Boys and men don’t have the market cornered on the desire to be strong or capable. I’m not sure where we were when it was decided that the benchmark for men would be related to success and strength and for women, it would be beauty and how little space we take up.

I want to be as loud and as powerful as the surf and to have my daughters do the same. 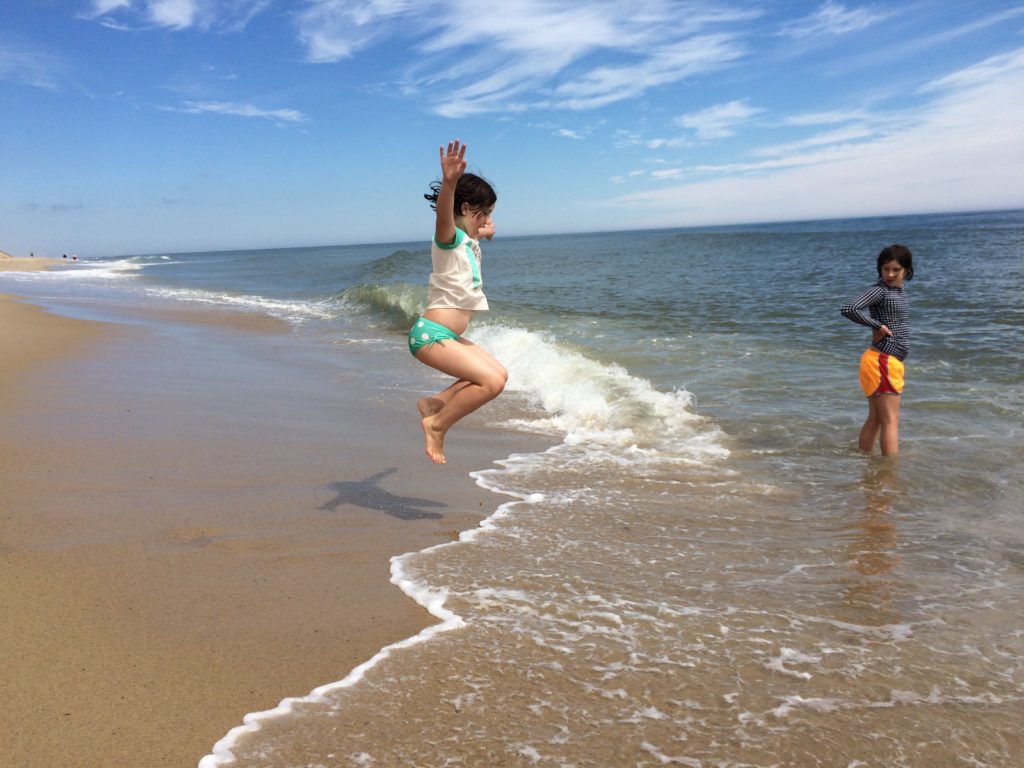 “I hear many young women say they can’t find well-known feminists with whom they identify. That can be disheartening, but I say, let us (try to) become the feminists we would like to see moving through the world.”
― Roxane Gay, Bad Feminist