From Scratch Taste from a Box—Krusteaz Protein Pancakes

This sounds like an ad. Let me get the particulars out of the way. I got an email from someone asking if I’d like to try Krusteaz’ new pancake mix. I got ready to hit delete, but saw it was GMO free and realized that as much as I have enjoyed making the girls pancakes from scratch, maybe a box or two in the pantry wouldn’t be a bad idea. The fine print, as in this was a fine deal, they sent me several boxes to try to to share with you.

Here’s my take on the ‘cakes. if you’d like a box (and whatever else I think to tuck in the package) share your most magnificent kitchen fail in the comments. Doesn’t have to be breakfast food or pandering to Krusteaz, this is purely for my enjoyment 😉

The mix promises to produce fluffy pancakes with 13grams of protein, all I had to do was add the appropriate amount of cold water. Literally the hardest part was that I had a 1 cup liquid measuring cup which meant I had to make two trips from the sink to the bowl. 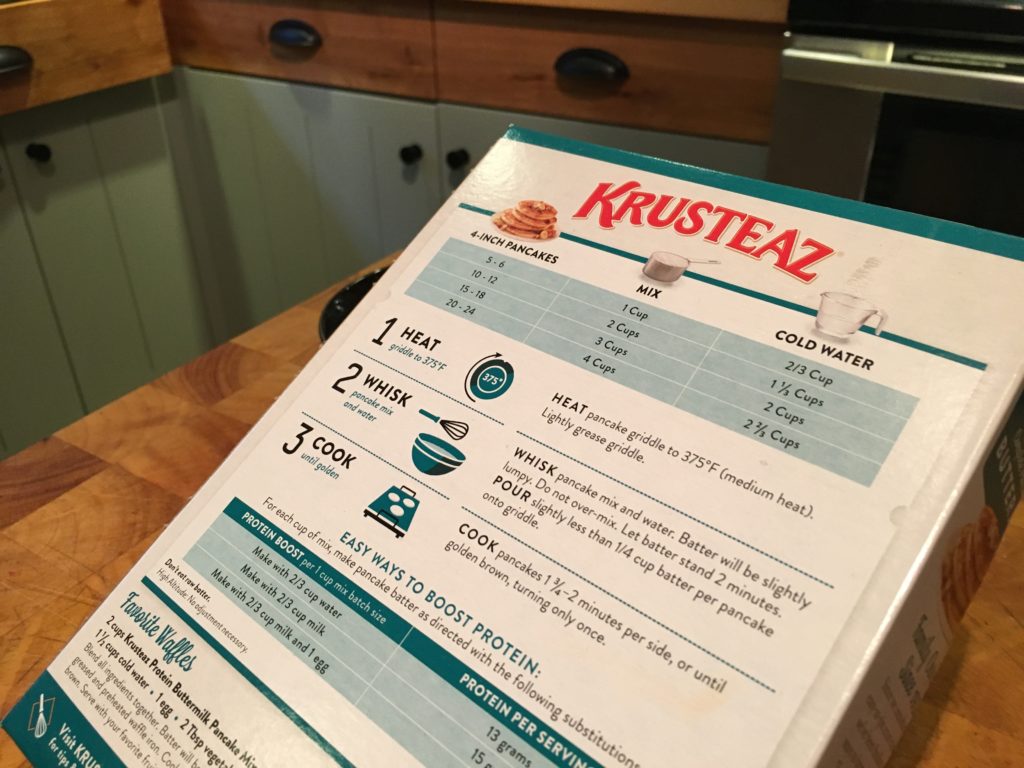 I plucked a light aqua colored bowl from a top shelf and smiled at the matchy-matchiness of the bowl, the mix, and the tea kettle on the stove. As I added the mix I was relieved to not be doing the usual search for baking soda, baking powder, and either seltzer, or forcibly soured milk to make fluffy pancakes. 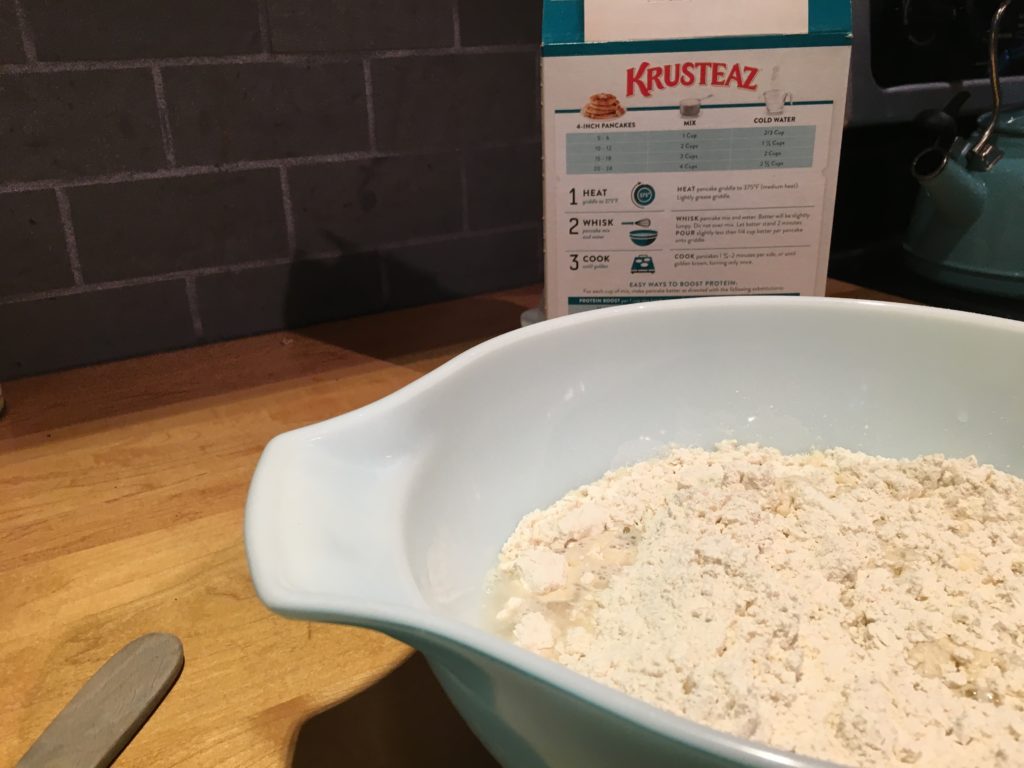 Sean has said in the past, “You guys didn’t save me any pancakes?” I thought it would be nice to make him some with the blueberries my mom had dropped off. It didn’t hurt that they came in an aqua colored box. (It takes so little to delight me).

Sean strolled in, “Who’s Pat?” I looked at him, bracing for a bad joke that I would somehow be the butt of.

“Yeah, tell me about Pat,” he turned the blueberry container my way and there in all CAPS was PAT.”

He smirked, I snorted. 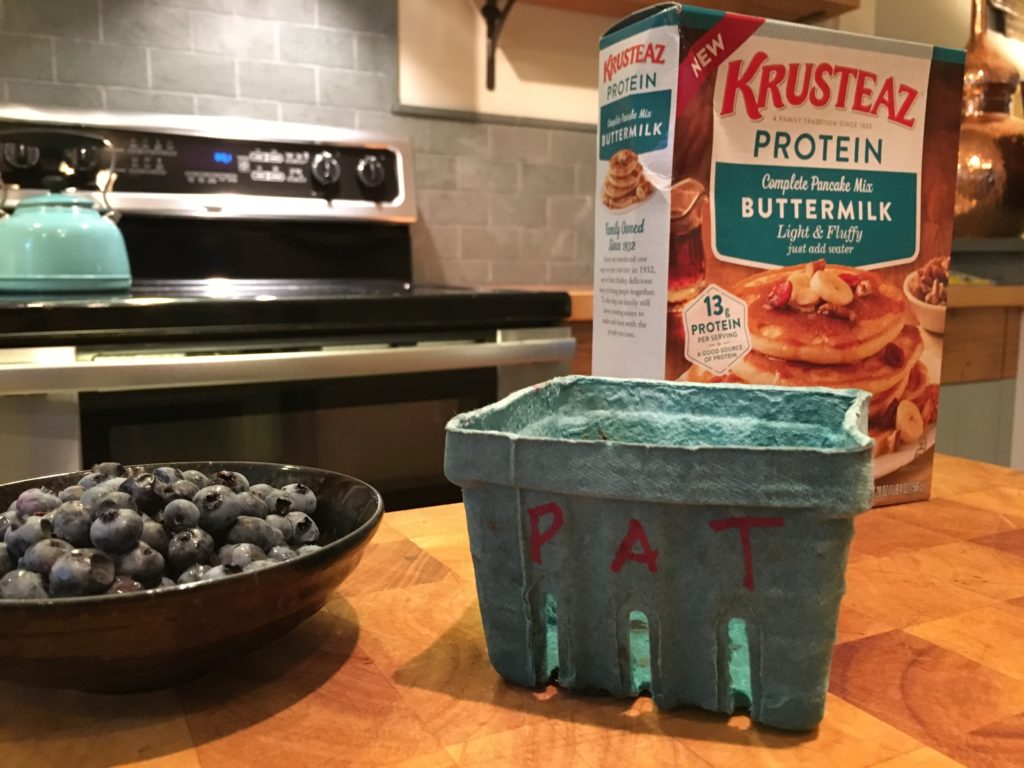 Alas, no aqua whisk, but this does give me the opportunity to share with you just how messy I am when it comes to—

really when it comes to anything, but for today let’s play make-believe that it’s only with pancakes. This is in no way the fault of Krusteaz. 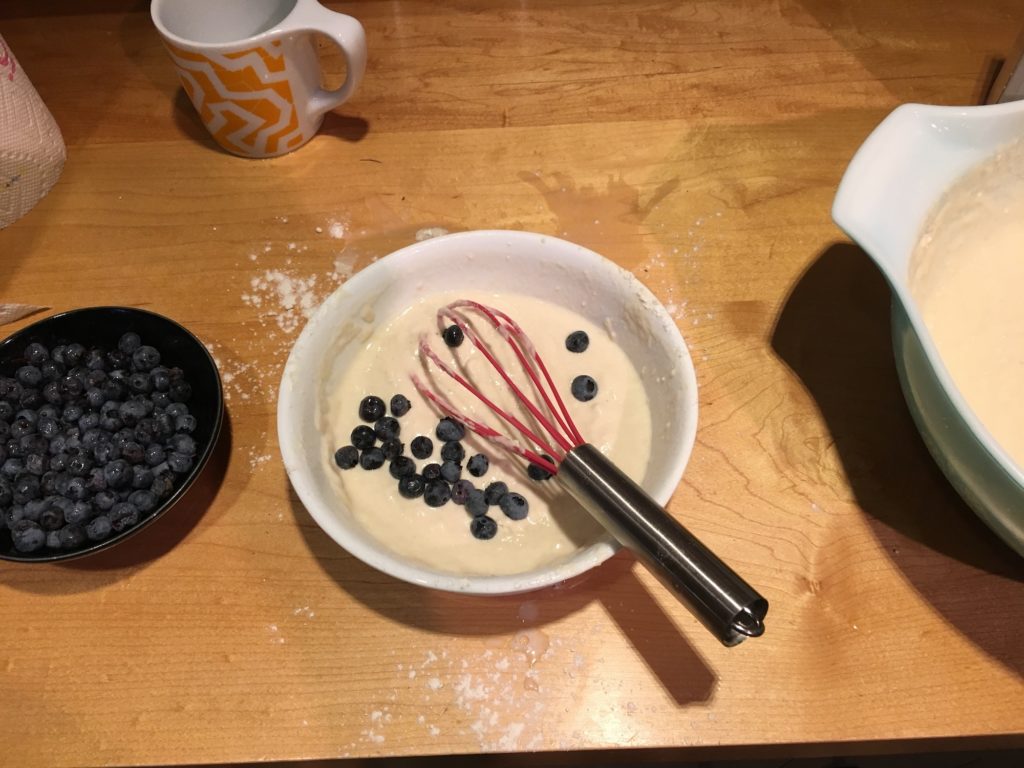 Seriously, I am basically a kitchen tornado. Even Beso knows, unfortunately for him it was all flour, not even a blueberry, which truth be told he wouldn’t have touched. I would have stepped on it and hysterics would have ensued as I imagined it having been something else. 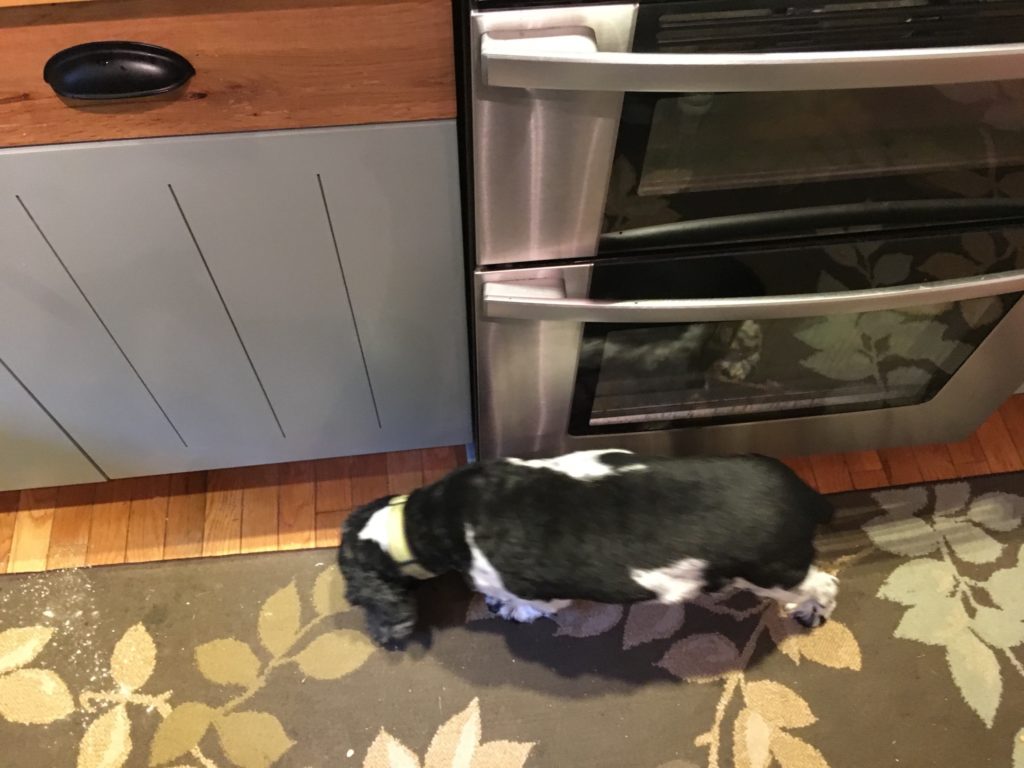 Here is the magic moment, cooking the first batch.

“The first round is always bad,” Sean said gently, a testament to how things happen in a marriage that you learn from; my lesson was to not lost my mind over bad pancakes, Sean’s was to be patient as I find my way out of a tantrum (bonus points for not laughing at me.)

The batter easily dropped from the spoon on to the pan, almost immediately puffing up. Even the first batch! Flipping them with the gargantuan-size spatula when I couldn’t find a regular one was a beast. (Note the cake serving utensil, which I also tried for flipping to no avail. Must buy a spatula!) 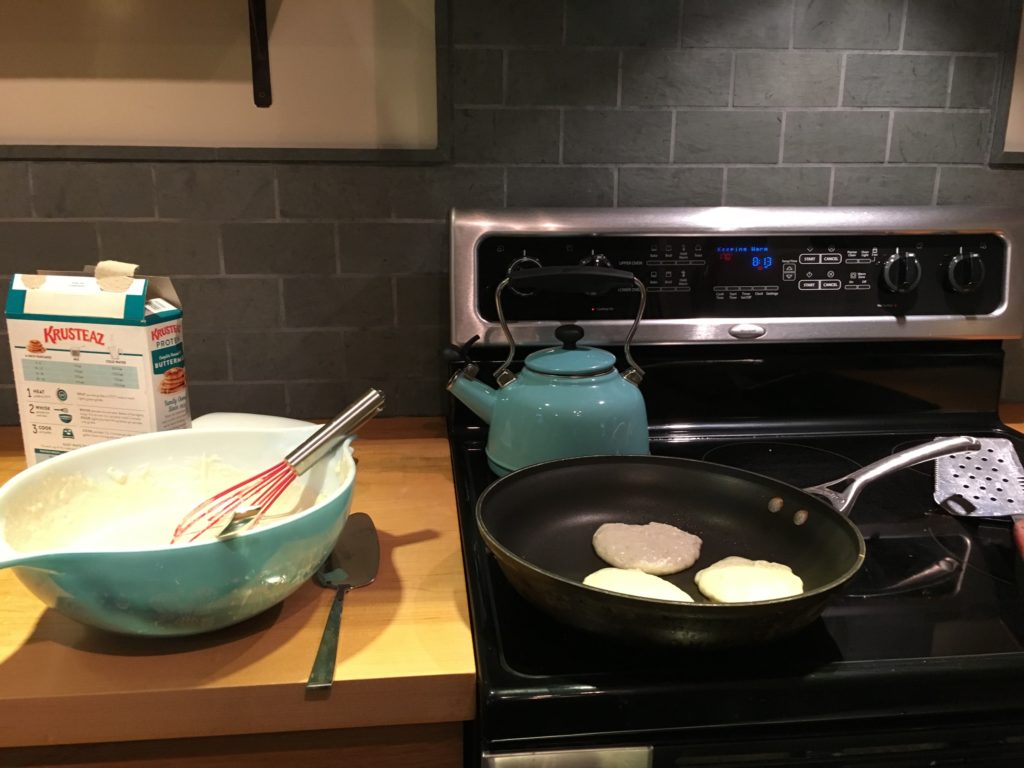 This is my attempt to show just how fluffy they were. Dense too, in the good way. The girls each had 3. I made the whole box from past experience with their appetites, I was wrong. A few of these go a long way.

The girls were curious, “So was it seltzer of that bad milk thing* you do that made them fluffy?”

“A mix? Huh, they taste like your usual ones, but a little better, no offense.” 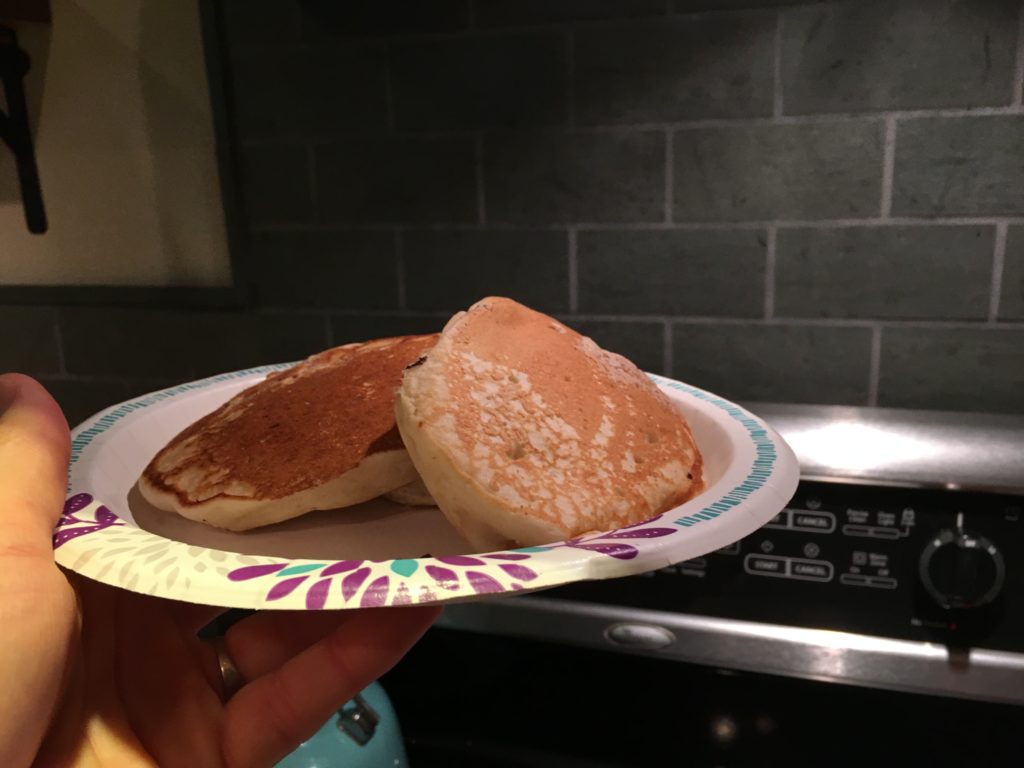 These were seriously tasty pancakes. Thanks Krusteaz!

*The bad milk thing is adding white vinegar to milk to make it sour like buttermilk.