This fall has carried with it an unprecedented level of busyness. I used to sit in the camp of busy being good, but several years ago I saw the light. No one cares, there are no awards, you don’t get out of bad luck or health calamities because you were working hard. Life happens whether we carve time for it or push it off until “things ease up a bit.”

Sunday was the final day of the girls’ and Sean’s run of Oliver. It was a whirlwind that came to a close on the doorstep of exhaustion. Any longer and it would have been too much, any shorter and it wouldn’t have been the experience that it was. Monday morning Sean and I trained to the city for a video shoot. This definitely tiptoed along the edge of too much, particularly with Sean heading out again later this week.

My parents brought the girls and our dog to their place for the night. Sean and I planned for an afternoon into evening of shooting and then a late dinner before collapsing in a hotel. The venue for the shoot, Farmer and the Fish, was gorgeous. We set up outside to capture the hustle and bustle of the city against the simple sign and potted herbs overflowing around the door. I pressed a leaf of basil between my fingers and laughed aloud at how the scent, always a bit like cinnamon in my mind, filled the air around me. Ivy leaves tickled the top of my head and I reached up to touch them, like one of the girls playing with my hair. 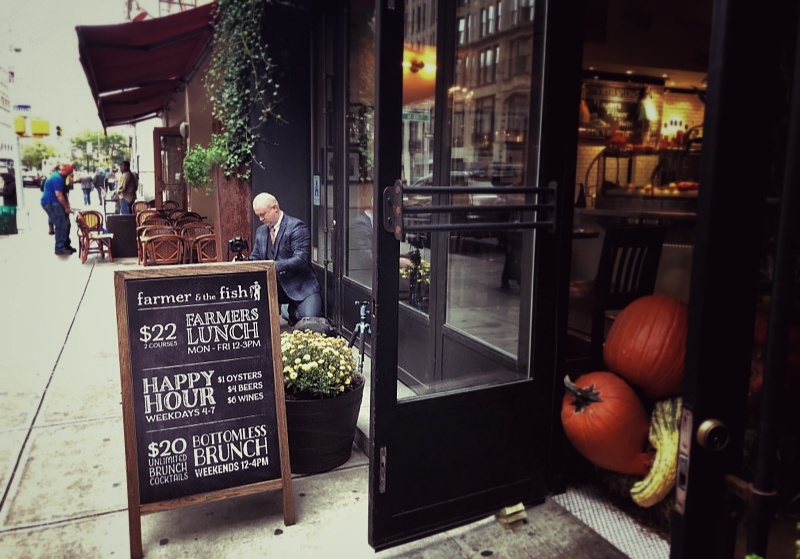 I’ve not really been on photo shoots with Sean, it’s one of the rare times we divide and conquer at work. He’ll travel to clients and I’ll stay back at the office managing other things. Standing beside him, I once again felt slightly out of place, unsure what to do.

He didn’t say anything, I waited. “Just block for me.”

I looked around at the endless motion of the people on the sidewalk and the irresistible pull of the menu to passers-by. How on earth could I block anything? I began a quiet campaign of kill them with kindness. As people would look at us, craning to figure out what Sean was doing I would smile, trying to get my eyes as twinkly as possible. It was completely absurd and I found that I loved every minute of it.

I let people’s responses to my smiles wash over me, because they all smiled back. One man asked for money, said it was his birthday. Sean was fussing with a lens. I reached into my wallet and pulled out ten dollars. I placed it in his hand. His eyes got big. He said, “Bless you,” and I touched his tattooed knuckles and said, “Bless you.” He stood there and smiled at me and I smiled back. “Thank you very much,” he said. Again, I replied in turn, “Thank you.”

As he walked away he took off his hat. About a half a block down he lifted his head and kissed his hand and held it skyward. Eventually I couldn’t see him anymore and I turned back to Sean.

I walked over to the sign and turned it around, careful not to let my fingers get pinched. I looked down the other side of the street, back toward where I’d just been standing. I was nobody and everyone on that busy street as different faces and things came in and out of focus for each of us. I think we really need that, to slip out of the speed and tension that we maintain each day and experience something closer to different. It doesn’t need to be radical, just a little shift in focus.

Categories: Random
No comments yet…