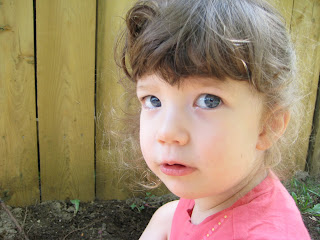 Avery has approached every single minute of this whole broken leg thing with utter grace and equanimity, neither of which I think I could have mustered at two, let alone at 34. She has adapted, scooting, slithering and even hop-walking. Her demands have been well within reason and any “abuse” of help, ie “take me here,” and “take me there,” has been short-lived.

Yesterday all the kids were out front playing, some holding a lemonade sale, others riding scooters and bikes. Eventually they congregated in one driveway to draw chalk art and pick flowers. Avery was right in the middle and enjoying herself until the inevitable drift happened with one girl going one way and another the other way.

Avery assessed the situation, looked down at her leg and then up at Grandma and said, “Grandma, I wanna run.” It was like an epiphany, a sudden awareness that she hadn’t been running, and then again, this time with the delight of a person discovering a great solution, “Grandam, I wanna RUN!” Her face held every belief that Grandma would make it possible and she’d run.

After a few days of feeling like we’d overestimated how hard this would be, the reality of a summer cast came rushing back. Poor Ave, poor Grandma.