Daisy of my heart

Around Mother’s Day I was given a Gerber Daisy plant. It was something we did for all the moms in the office. They brought instant smiles with their thick green leaves and bright blooms. I took mine home and set it on the window in the kitchen. It was a bright spot in the dust and mayhem of moving. The plants in the office slowly, one-by-one died. I took a closer look at mine at home and noticed it was failing. Refusing to give up, even in the weeks that followed when it teetered on the brink of shriveling, I watered it. Some days I talked to it.

Our move was incremental, with many trips going to the storage unit, others to the dump and then finally to our new house. The plants were the last thing to move (along with that inevitable pile that you forget or just pretend doesn’t exist until someone calls and says, “About that broom, wastebasket and soap dispenser…I’ve left them in a stack in the garage for you to retrieve.” Honestly, I though the soap was a kind gesture. Pffft.)

I kept the daisy on the sunny kitchen counter of our new home. We busied ourselves with unpacking and decorating. The flower sat, quiet and companionable.

Several weeks passed and the little plant looked unchanged, not dead but far from flourishing. I don’t know what possessed me to do it, but I walked out to the yard with it and planted it alongside the back stairs. It looked a bit awkward and suspect alongside the delicate blossoms we’d planted from the market. Each day I walked out and watered, waiting for a sign that it was mending or that I needed to yank it.

The other day we were at the neighbors as the girls played with the boy and girl that live there. Briar is wild about the girl, a beautiful 8 year old with a sweet disposition and a coltish way that makes me beam at her fondly. The boy, 6, who I had thought to be Ave’s favorite, is a sun-kissed caramel color with luminous dark eyes and a crooked smile that echoes the grins of a blur of boys that made my tummy flutter in elementary school.

They had been trying to play baseball, but they are easily a few years from it working with the pitching being less than accurate. Soon they were swinging and sliding and mimicking each other’s actions on various perches throughout the swingset/fort combo they have. I left to curl up in a chair in our yard and read while Sean stayed to supervise. I love the tinkle and crash soundtrack of kids romping outside. I could hear Sean and Dr. Jim, the father of the aforementioned adorable kids, talk and guffaw about stories I couldn’t hear.

After about 45 minutes Ave called for me to come and meet her in the secret path between our houses. I walked gingerly to the narrow opening. Dr. Jim had trimmed some of the branches back thus creating an enchanting tunnel of sorts, through which the kids pass again and again during their dates. As we were walking she said, “That dad is so funny. He talks about eating Daddy Long Legs for dinner.” I laughed and tried to carry the joke, asking if they had butterflies or lady bugs for dinner. She looked at me slowly, smiled weakly, shook her head and said, “Yeah, he is such a funny dad, that guy.”

That night Sean came to me in the hallway and said, “I have to tell you a story. When we were next door Ave was running around and all of a sudden she came and tugged on my shorts. ‘Dad, dad,’ she said. ‘Dad, can you tell Dr. Jim I think he’s pretty?’ and she ran off.” His eyes were twinkling as he told me the story and I laughed. Avery has her favorites and very rarely can I anticipate which category a person will fall into. Dr. Jim, pretty. It makes perfect sense, but more than making sense it touches me in a place where joy and hurt blur.

My sweet, quirky, stubborn Ave has a crush. It’s completely normal and it’s not. I’ve been trudging along beside Ave, wading through dark colors and odd ball delights. She wants gnarly when her sisters wants sparkly. She lives wide open and then clams shut, unwilling or unable to let us in until whatever cloud of hurt has passed. It isn’t that I didn’t expect her to crush, but I guess I just thought I’d be with her as it happened.

I walked outside the other day and saw that my Gerber had bloomed a bold red and stood tall and strong above the other daintier flowers in the row. 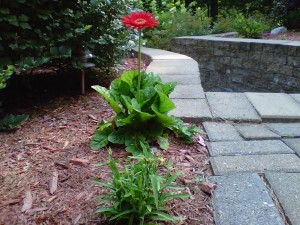