I put aside a lot today to just allow the kids to run with friends. The whole group needed to cut loose and they did. I watched them attack the opportunities and leave behind the whining, I-can’ts and no-fairs. I tried to do the same thing. I set my worries in a figurative crucible, it felt a bit reckless, but I realized that my analyzing and murmuring had done nothing to solve them, better to let them stew in their own foulness away from the potent and pure demands of outdoor frolicking.

There were snacks and MacGyver fixes for the things they wanted to do, there was help with contemplating how to capture a falcon and there were theatrics when a handful of spiders was brought into the house…did I mention a boy came over? I followed behind, sometimes sneaking ahead, responding to and anticipating their needs. As the rhythm of play took form, I became truly peripheral, and then, finally, forgotten. After a luxurious 10 minutes spent all but making out with an ice cold, lime seltzer, I decided to go back to the kids.

I crept beyond the playthings and tiptoed out to the woods to see what they were doing. My breath caught as I watched and listened. They were scaling trees, their grubby but able feet snaking around the limbs, their muscular legs spanning distances that belied their size. 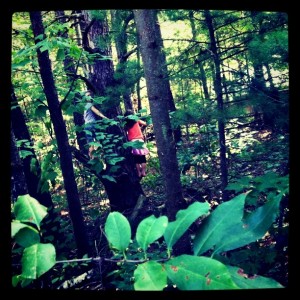 Then there was the talking, the whispers and exclaims. They were having so much fun, reveling in their own wonder and imagination. 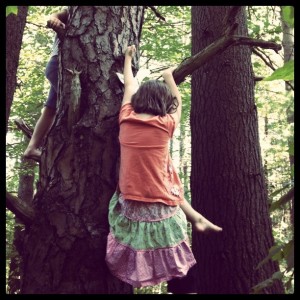 I quietly asked if anyone needed anything, they opened their circle to me. Letting me know that nothing mattered more than that very minute. They wanted me to feel the way the logs felt soft from the weather we’ve had, “smooth like branches in the lake”. They told me they’d heard birds, so many birds. A chop saw rang in the distance, “What. Is that?” They asked in a stage whisper. I waited, letting their suspense mount, and explained what it was. They began theorizing what was being built. Then, what they might build with so much wood around them. 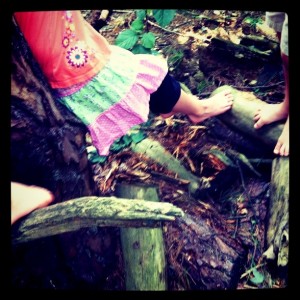 As I walked back to the house, my feet sank in to the still wet grass, clippings clung to my toes. I smiled, thinking of how the kids would describe it—it’s like we’re in a swamp, or on a mudslide. No, no, it’s a beaver lodge, we’re on top of a beaver lodge covered with grass to hide it. When my feet hit the deck the hot planks startled me, I hopped to a spot of shade along the railing and came face to wing, with a bee. It was burrowing in the white petals of a phlox plant. I watched him and heard the gentle buzz of more bees. They whizzed and whirred from bloom to bloom. The kids squealed and thundered in the yard. 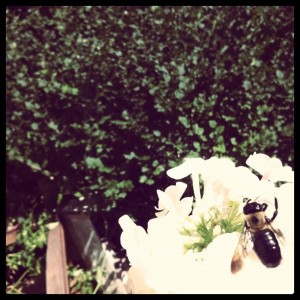 Looking at our sliding glass door I had no illusions about my problems being gone, but I realized that they weren’t everything. They are one or two trees in a gorgeous plot of land. My hand on the door, ready to go inside I turned back to look at the kids and the two youngest were walking toward me holding hands. “Hey, the mama? Ya’wanna come and play wif us?” I walked toward Finley’s little friend smiling. “The mama, you can fix my hair.” She said. Finley grinned at me, “She thinks you’re the mama. You’re not the mama; you’re just my mama. But we’re playing, so anybody can be the mama.” We three pranced across the grass allowing ourselves to just be—whoever we wanted to be.

And it was perfect.