This Mother’s Day, if I could make one request, it would be this: one of my childhood friends, a girl who peppers most of the happiest memories of my youth, needs something, I’d like to help deliver it to her.

We fell out of touch as people do, and then reconnected through Facebook. I’ve often chuckled at her pictures, her three rough and tumble boys a stark contrast against my three squealing, boa-loving girls. She in Oklahoma, me in Upstate NY, both so very far from Eugene, Oregon.

During movie time in school we used to take her Swatch watch and take turns running it up and down one another’s forearm to pass the time. The watch smelled funny, rubbery and sweaty, and the motion tickled. We’d play together, all knees and elbows. She became a serious distance runner, I ran hurdles. We drifted apart, but I think we always kept a little seedling of our friendship going. At least I did. Finding her again was the tenderest of gifts.

Not long ago it became clear that something serious was amiss with her youngest boy, Ransom. His eyes are so big, and while his face is not a carbon copy of hers, the wide open kindness that I remember of Aimee leaps from the screen each time I see him. I reel from the awesome reality that she has children, that she made more Aimees, boy versions though they may be. I don’t anticipate any trips to Oklahoma and I am not on the reunion lists for the Eugene schools after having moved in 8th grade. So we have Facebook.

A Request for Prayer

Many of our friends have very graciously been praying for and thinking about Ransom throughout these last several months. A big thank you to all of you!

This SUNDAY (MAY 13) we would like to ask anyone who can to pray a Novena for Ransom’s healing. For anyone unfamiliar with a Novena, it is simply a prayer that is prayed for 9 consecutive days. We are asking those participating to pray through Psalm 20 and ask for Ransom’s healing. If there is anyone that you know that might be willing to participate we welcome any and all prayers.

I will post more later, I just wanted to give anyone interested a heads up. Thanks so much.

PS He’s still in the hospital and will probably be there at least through the weekend. His levels are very low (nearing zero) and so it’s hard for his body to fight infection. Hopefully they will start going up tomorrow.

Her son Ransom is in the OU Children’s Hospital and has been diagnosed with a rare form of cancer for someone his age. He has two older brothers and a face that will make you melt. I can’t quite wrap my mind around how he is just that kid your eyes would follow on the playground—the eyes a little twinklier, the smile a little wider, all in all irresistible in a way that just makes you feel happier. Aimee was like that, maybe a little more timid. Maybe he is too.

Aimee lost her dad last October and has shown incredible grace throughout what has to have been the hardest season of her life. Today she posted this: 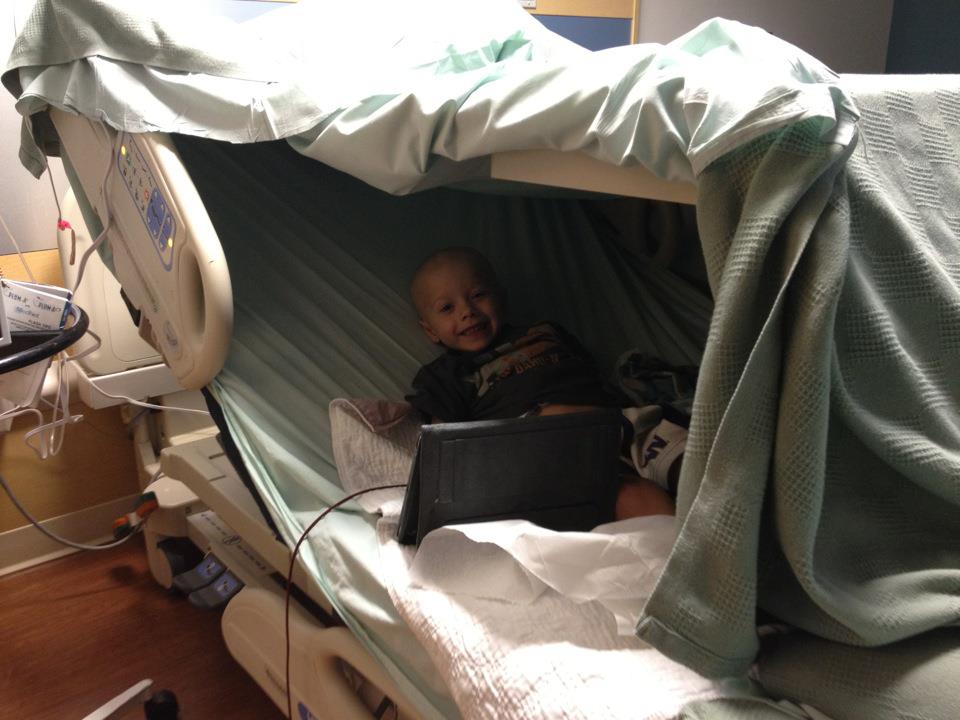 “A fort/tent for his hospital bed. (His cousin Alex helped build it.)”

She has used words like neutropenia and she has talked about the second round of chemo being harder than the first. I get overwhelmed by the details and the gravity of it all, but when she made her request I thought I had finally found something to latch on to. A way through, or at least to—a way to send her love, energy and the swelling of support I know lives in this blogging community. I am writing to ask you to help Aimee and Ransom and the rest of their family.

I believe I have eliminated all the hurdles of commenting. No need for a blog. No need for an email adress. No need for a real name. I am just asking that you leave words of encouragement, however they come to you, that I can direct her to. Maybe it can diffuse some tiny measure of her anguish and give Ransom a little boost.

I thank you from the very bottom of my heart.