The concept of unplugging is a thing of beauty. Set aside the phone, close the laptop, hide the remote, and give yourself completely to the three dimensional. The pressure to unplug and the judgement of not doing so has become an oppressive blanket. The divide between those of us who use the online realm for work and those who don’t is a rapidly growing chasm. Essays on “That mom at the playground” abound. Luckily, of all the things I take to heart and struggle to overcome, this kind of judgement isn’t one of them.

I want to unplug. I set my phone to silent and tuck it beneath the lamp in my bedroom. The tv isn’t an issue, it holds no real draw. Laptop, stowed. And yet, it isn’t the pulse of social media or the persistent tickle of email that tether me. All of that I can easily power down, it is the hamster wheel in my head that runs toward closure and things making sense that I cannot stop. My mind, no matter how pressing the details of my life are, seems unable to terminate the way it is set on repeat to fix things.

Friday was a bad day full of loose ends and unpleasant moments. Sean had a late night gig and the weekend was forecasted to be a wash out. I came home in a bit of a fog, wasted from the week and filled with a gnawing dread of being cooped up with the girls just as spring fever had really set in for all of us. Around 6 o’clock Sean took the big girls to their piano lessons and I went about making dinner while half-heartedly playing family with Finley. I put meat in a marinade for Sean to grill and chicken in the oven for the girls. It was a classic case of going through the motions, not because I wasn’t interested, but because as unplugged as I thought I was, I wasn’t.Lately my plug has been broken, irrevocably stuck in the on position.

After dinner, Sean gone and the steep climb of bedtime looming, I walked out of the kitchen and found a pile of discarded cardboard boxes. Suddenly all three girls were upon me. Boxes, you see, incite in my girls a kind of excitement and wonder rivaled only by bubble wrap. “Can we have those? Can we have every single one of them?” They were breathless and purposeful and, I saw quite clearly, filled with undiluted hope.

They carefully inspected the boxes, turning them this way and that to determine their potential. They flirted with fighting, but kept moving, tearing out of the room exclaiming over the superiority of their picks. I puttered past the stairs and in to the laundry room, so much laundry, I turned back. Finley called to me from upstairs. She wanted me to play. I feared being distant, because at five she would prefer that I not play if I am only going to gaze off into space or check my phone. I trudged up the stairs thinking I’d play for a couple of minutes and then start bedtime.

At the top of the stairs I felt myself cross a line. The girls were scattered, each doing her own embellishment to the cardboard. They were getting along and I suddenly understood how intimate this was, how sacred our home can be if I let it. I didn’t want ghosts here, couldn’t abide the thought of the bitterness I have roiling around so close to these girls. Protecting my family goes beyond the surface, because everything I carry inside of me, I bring back to them.

“Girls, what do you say we build a fort around you and actually design the boxes? I even have another box downstairs that I can cut to make a privacy wall.”

They tried not to look surprised. They tried not to rush me in their excitement. They watched me and waited, three sets of blue eyes and three pairs of hands, still small enough to catch my breath. I gathered supplies, unpacked fabric, and set about transforming the hallway and my heart. Each loop around the banister loosened my shoulders, each squeak of the marker against cardboard cleared my head. I watched them purse their lips and grip the scissors. Dots of green and smears of blue were everywhere, on noses and cheeks and even the carpet. I felt a kind of Christmas morning giddiness. We kept going, with Beso curled up happily on a stair and bedtime miles from any of our minds.

Sometimes things don’t make sense and letting go has to come from a place that allows the reality that nothing I could have done would have changed the outcome, other times letting go can only really be found in holding on to something else. 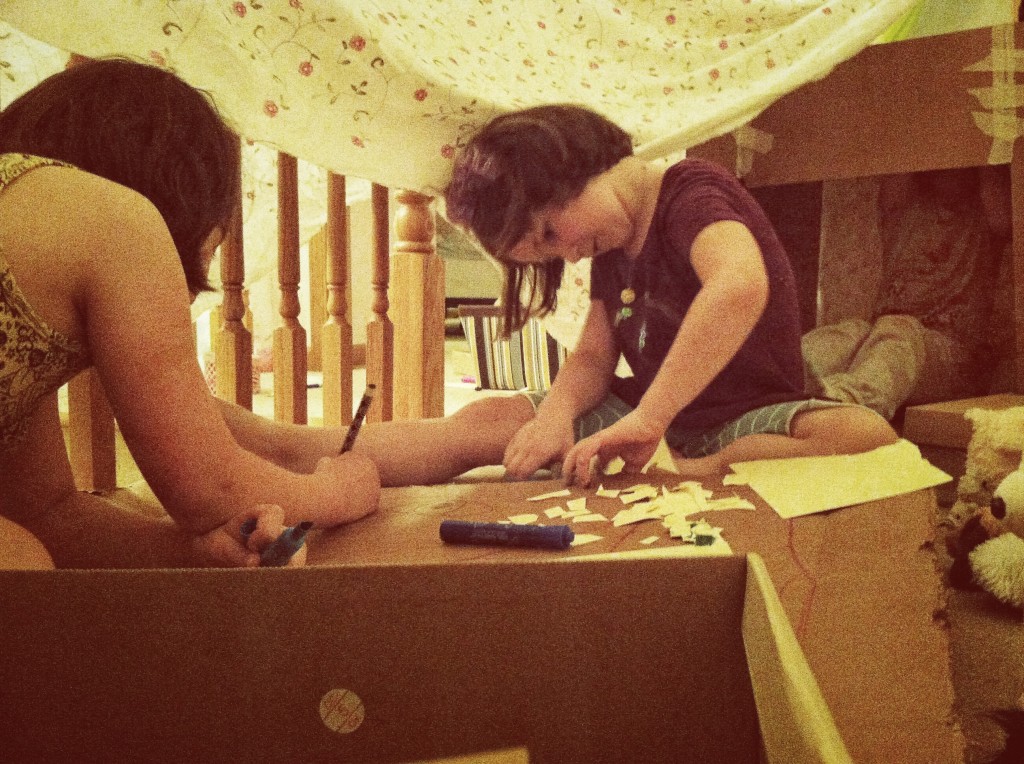 Holding on to my dear life and loving it.