Turns out that heartbreak and horror taste like bile. I am not talking about the election. I’m specifically talking about race in this country.

Black people. Black lives. Black lives mattering or not mattering and the people who fill rooms with the reasons another black person is dead. So many reasons that don’t include the person who shot, choked, or abandoned them.

This Instagram post, which I saw through Amy Vernon, hit me. I know not everyone is black, friends with a black person, aware that black people aren’t inherently thugs or angry, everyone is not me, but everyone living int his country is a part of what is going on, no matter how far your home is from the latest death. I also know that a lot of people haven’t been impacted by sexual assault or grasped the fact that a person being intoxicated doesn’t imply consent. So for me, this made my ears bleed with the truth. I would think it would for anyone, but I’ve thought a lot of things about people, empathy, compassion, and enlightenment and then been sorely disappointed.

I found this other article to help offer a bit of insight into why white people need to participate. Leigh Ann Torres shared it first.

Read it. You can read it in the quiet of your own space, you don’t have to immediately say anything publicly, but just try sitting with his words. And remember, it is going to be hard at some point, you may feel attacked, try to ride through that to the other side which is knowing that regardless of privilege, you have choice and power. No matter how small you think your power is, it’s more than that of a black person trying to say the same thing (because you aren’t black, which is a part of privilege, which does not mean being better than someone).

There is also this from Luvvie Ajayi. I will tell you, there is no way through where we are that doesn’t involve discomfort. I mean real, cheeks flaming, I-want-to-crawl-into-a-hole-while-screaming, “But I’m not like that” as I bolt from discomfort. Things being hard or scary aren’t a reason to give up, particularly when there are people for whom “where we are now” is not something they can hide from. 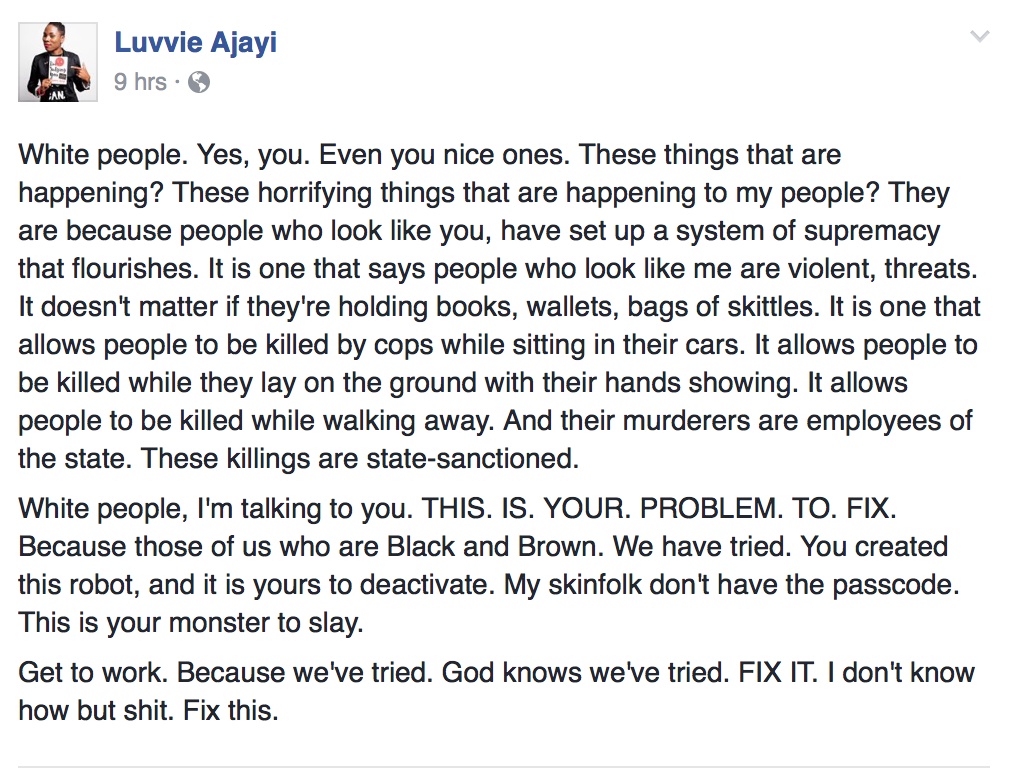 Here’s the thing, this isn’t a black issue, it isn’t a political party issue, it’s an American issue and a human issue. You want to be on the right side of this. Please. Be like Amy and Leigh Ann, be a part of working to heal some of what is wrong.