“Mom, why is there so much sexual harassing in the news all the time,” Finley said as she plopped down beside me holding one pink and one black rubber band for the picture-day braids she’d asked me to do. 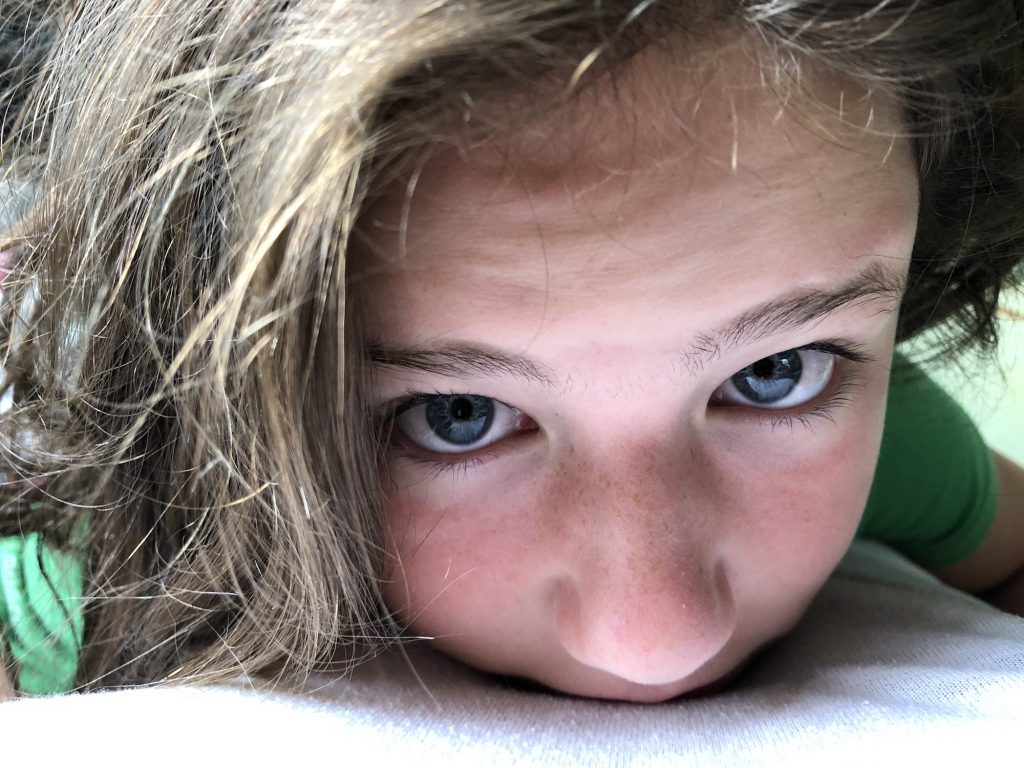 “Well,” I started as I looked at the Today Show on TV. The kids like Al Roker and the Emmys were last night—there was sure to be coverage of the event and in turn, opportunities to see the Stranger Things kids on the screen.

As the commercial break ended and coverage of sexual assault allegations against Supreme Court nominee Brett Kavanaugh played, Orrin Hatch filled the screen and referred to the woman accusing Kavanaugh of attempted rape as “mixed up.” Another sound bite had the President lamenting such awful treatment of the nominee, “a man that does not deserve this.”

I considered my words, but found my head filling with the familiar echoes of, “She deserved it,” and “She asked for it” and “Why was she there?” There had to have been a moment when we collectively decided the responsibility rests with the woman.

The night before Finley had asked me, “What does ‘that’s what she said’ mean?” At first, I thought she was asking because the girls have discovered The Office.

“The other day I was at school, and my chair made a noise and people looked at me. I said I was trying to push my chair in hard and a boy said, ‘that’s what she said.’ I said that I didn’t know what that meant and he repeated it. Then a classmate told me it’s inappropriate and I told the teacher.”

She looked at me, “So what does it mean?”

Now, this kid has experienced me explain how “live stream” can be a euphemism for a man ejaculating live on social media. I should be able to explain “That’s what she said,” and yet I was stumped. I have said it. I have a dear friend who says it all the time. It’s wildly inappropriate and one small speck in the bucket of things we have normalized.

Why is a ten-year-old saying it? Why are ten-year-old boys playing “Kiss, Marry, Kill” in the cafeteria? How is it that 12-year-old girls are saying, “Girls can’t wear spaghetti straps because boys get boners?”

I am not a prude, in fact talking candidly about bodies, public debates, sex, relationships, and regret is something I take great pride in as a mom and a human being. Where I get tripped up is in the moments when the prevailing mindset seems to be that boys will be boys and girls are confused. It’s not a few people, it’s not sick people, it’s a lot of people that have their heads on straight. When Sean and I talk about how we will prepare the girls for increasing independence, we cover people being mean and dishonest and we also discuss safety.

I want to let them know that I think many of the dress code rules and behavior guidelines are punitive toward girls, creating and reaffirming the wide berth we give boys as they become men and long after.

Sean has said to me, “I want to teach them to be safe, which can mean knowing how boys think.”

I responded with a rabidness that shocked us both. “No. No, no, no! Why are we adapting to work around boys? Why are we expecting so little of boys?”

“Because I can influence the girls, I can’t control what boys will do,” he said.

“You can. You can influence other men, you can stand up and speak out. You can nip locker room talk in the bud and lead by example.”

He looked at me stricken. “Manda.”

“Really, why are we all so afraid to try and fix this? How will boys ever reach their potential? How can they be anything more than brutes if we teach girls to compensate for boys’ weakness? If we don’t start somewhere, it will NEVER happen.”

“You’re right. I get it, I do. I just want to keep the girls safe.” We looked at each other across the kitchen. I was so angry, weighed down by defeat and a sense of betrayal.

He crossed the room to me. I buried my face in his shoulder, “If you aren’t brave enough to do it…” was a thought that trailed off unspoken because the truth is as a mom and an adult woman, this is the monster under my bed. I am afraid. I am obsessed. I am unsure how to conquer it.

The coddling and protecting of men and boys touches education, the workplace, working out, and healthcare.

The other day Gabrielle Blair posted from her perspective as a Mormon mother of 6 why she believes, “men actually have zero interest in stopping abortion.” It was brilliant and believable. I wish some men out there would do that.

Senator Mazie Hirono may have said it best to men, “Just shut up and step up. Do the right thing.”