It plays in my head a little bit like a song, this concept of not knowing yearning before kids. I never knew what it felt like to want something with all of my being, to be consumed by the pursuit of something purely for the purpose of bringing joy to another person. I understood the things that would make me happy and I worked toward them, but I never persisted with the single minded focus that I do as I strive for my girls.

Fixing the house, structuring my schedule, creating memories, they are all fueled by an unabated hunger to delight the girls. This isn’t to say that I indulge every whim, but when there is room for magic, opportunity for awe or the potential to ignite wonder, I seize them.

We were at a friend’s house recently and the girls were enthralled by the old piano sitting in the study. They would spring from our arms to go and caress the keys, broke from the meal to make it sing. The only thing that brought them greater joy than tickling the ivories was having someone there to watch or play with them. Their peals of laughter floated up from their perch on the bench and danced pinging off the walls. Our conversation and eventually the entire tenor of the day, became laced with the infectious enchantment of two pigtailed little sprites.

Later the same day I posted a picture from their recital as my screen saver. Sean warned me that if I didn’t change the picture we would have a piano by the end of the month. I laughed, seeing him so moved by their joy touched me in that irresistible way that only dads devoted to their daughters can.

From the first time Sean put headphones on my pregnant belly, we had dreamt of having a piano. Now we knew that girls had the music gene. It seems such an essential thing, this nurturing of passion, particularly musical or artistic, and so the yearning began to burn. I had looked casually for months, scanning classifieds and online auctions, but never taking it too seriously.

A piano for our girls. How could we possibly afford it? Where would we find it? How would we move it?

“Mama, is that the piano we were playing?” Briar asked pointing at the screen and interrupting my reverie.

“Yes, baby, it is. You were making beautiful music.” I said with a smile.

“Can we do it again? Can we go to Debbie’s and play with that guy to the piano?” She asked, remembering Harold and his playing with a twinkle in her eye.

“Not today, honey.” I said, trying to hide any hint of the ache I felt. How magic to have a piano, to have their fingers run across the ivory instead of the keys on a Mac keyboard. I set my computer aside and called to the girls to play blocks with me. Everything we built represented a piano to me.
Keys.
A bench.
Pedals protruding from a base.

Later, after bedtime, I scoured the internet, poring over Craigslist listings within 300 miles. Bleary eyed and defeated after a couple of hours, I was poised to turn off the computer when I found one: Upright piano. Must go. Redecorating, the listing was less than a hundred miles away. Sean had said he’d love to get an old upright like Deb’s. I clicked on the link. 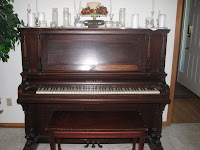 Dark and tall with areas worn and light. There were four spindles along the top with two matching on either side down below. The bench was dinged and plain. It wasn’t perfect, but it could be ours. I called to Sean and had him look. At first he was unimpressed, but over the next day or two he called the picture up time and again.

“I like it. I really like that piano. Let’s go for it.” He was smiling at me.

“Really?” And he nodded.

We drove to the people’s house to see it. They were a couple with two preteen kids. “We bought it for them but they never really took to it.” They stumbled over each other, talking about how one took up flute, the other drums. The excitedly ran for the music books, “Your girls are how old?” the young girl asked. “Nearly two and three and a half,” Sean answered.

“Oh! We have Disney. And kids books. And so much.” The four of them were quite a sight bent over the cardboard box rummaging through as if it were gold dubloons and jewels within a treasure chest.

“This came from a music store in Burlington, we think it may be as old as being made in the 1880’s,” the mom told us breathlessly. “The man we bought it from had bought it for his kids.”

We arranged to call a piano mover to transport and then tune the piano. Writing a check and shaking hands we headed back to the car. It felt like Christmas morning. “Can you believe we are getting the girls a piano? This piano that has been played by so many other children? And that it travelled from Burlington. I know it’s not a perfect piece, but I love that it has this history, has been loved. Did you see how excited they were? Can you imagine the girls, the looks on their faces?” I looked at Sean and found him just shy of laughing.

“What?” I asked. He kept smiling at me. I realized I’d been talking a mile a minute and that I was grinning. “Wha-aat?” I asked again.

“You. It’s just amazing to see you this happy. I am really excited for all of us.”

I beamed back at him and said, “This just really feels like the right thing to be doing for our family. I just can’t get over how good this feels.”

Driving home there was a full moon in the afternoon sky. I smiled as I thought of us ropin’ that moon for our girls and the faint sounds of a piano tickled at my ears. 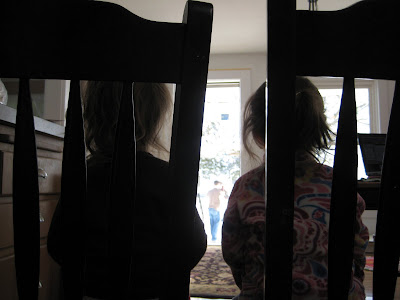 Updated*
Thursday the girls sat rapt, as the movers traversed three and a half feet of snow and ice to deliver the piano. It was a sweet, sweet day.