I’m not what you’d call a baker. I loathe following a recipe, largely because it means I have to have demonstrated the forethought to have prepped (ahem, made sure I had eggs or baking soda). The thing about kids, they like to bake. They remember baking projects vastly longer than they remember painting or playing with play do! They love baked goods. And, most importantly, you cannot mold things into amazingly adorable little shapes unless you are baking.

My friend Christina has a store up the road from ours called Sterling & Company. It is one of those places that you walk into and think, “One day, I’ll have the perfect taste to fill a shop like this,” and then you blush and slink over to a corner display so that people won’t realize you are experiencing a delicious flight of fancy. The shop brims with all manner of cute, useful and lovely things. You imagine they’ll all be beyond your means, but then they aren’t and then you feel princess-like again—cue another flight of fancy. Even guys get into it, which is how we came to have the “Munchstache Cookie Cutter” set.

Sean offered to pick up cookie dough and make the cookies one night while I worked late. I began to fret that they’d end up being something from a refrigerated dough bag and my HFCS, hydrogenated-this, chemical-laden-that button got pushed and I said I’d take care of it. I was going to hit up Epicurious or Allrecipes or some such thing, but Martha Stewart effortlessly SEO elbowed her way to the front and I shrugged, “If I’m gonna bake, may as well do it Martha-style.” and then I snorted, because Martha likely doesn’t curse, flick baked-on pizza crust off the tattered cookie sheet and call it good or wonder aloud, “Does it matter that the hand mixer is missing a beater?” I found solace in the “simple” in the title.

We can do simple. 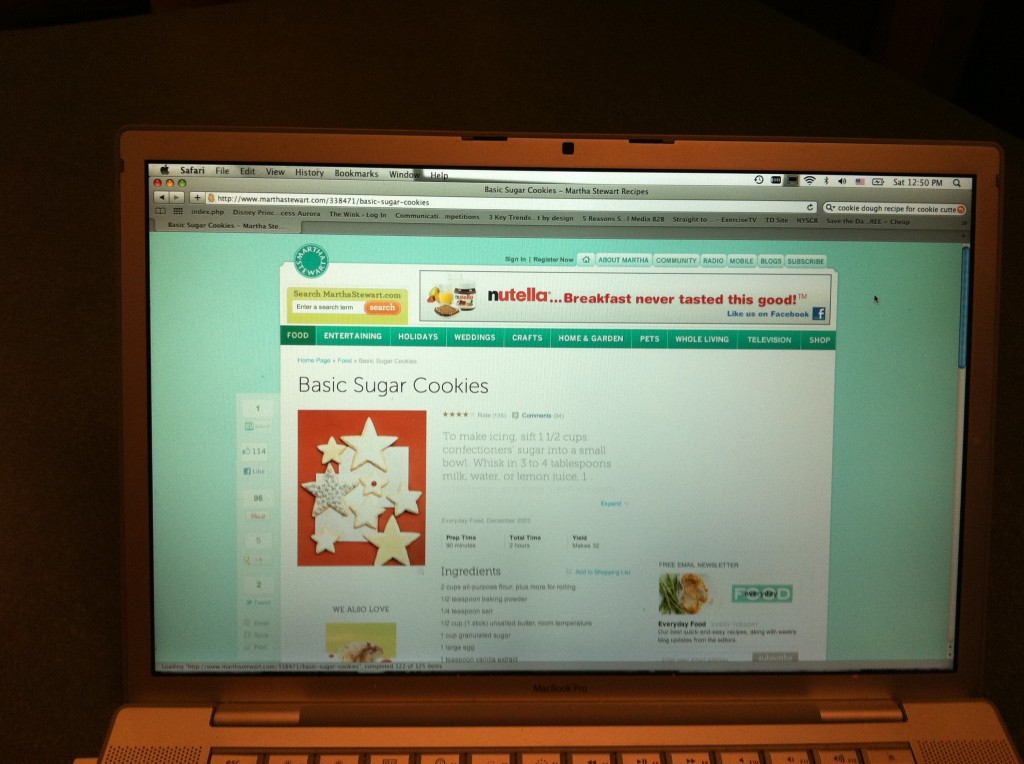 I took the direction-following seriously and washed the cutters. 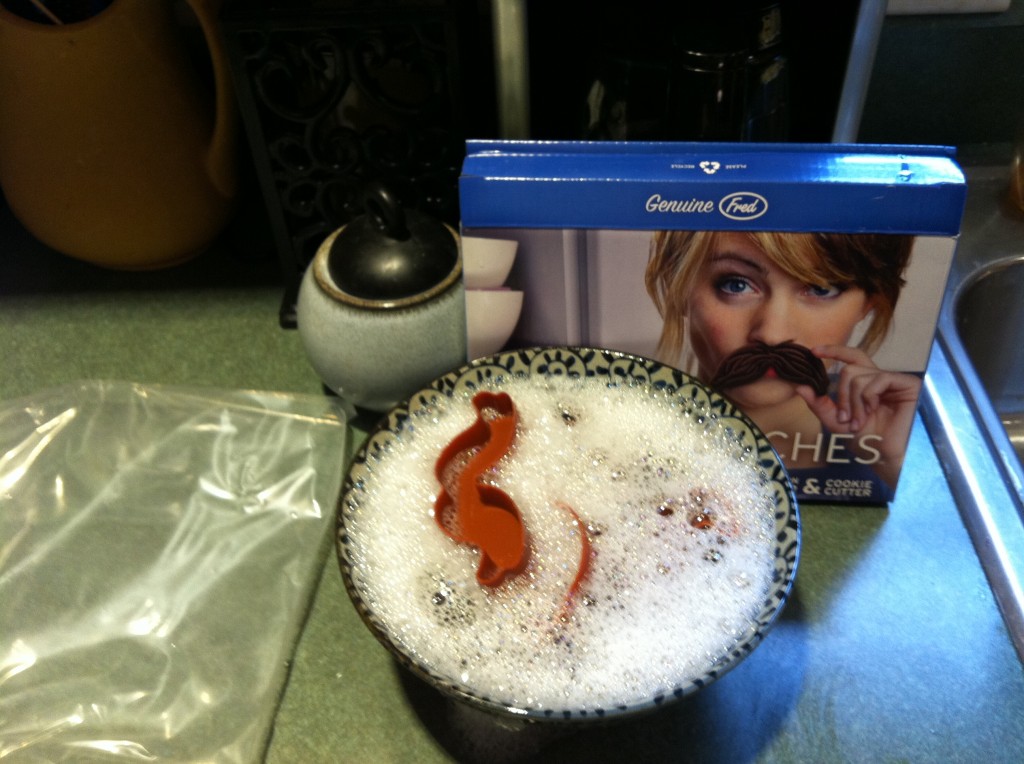 I used parchment paper (ok, regular grade wax paper, whatevs) to keep the rolling pin
from ever touching the dough directly. Much less swearing when it doesn’t stick! 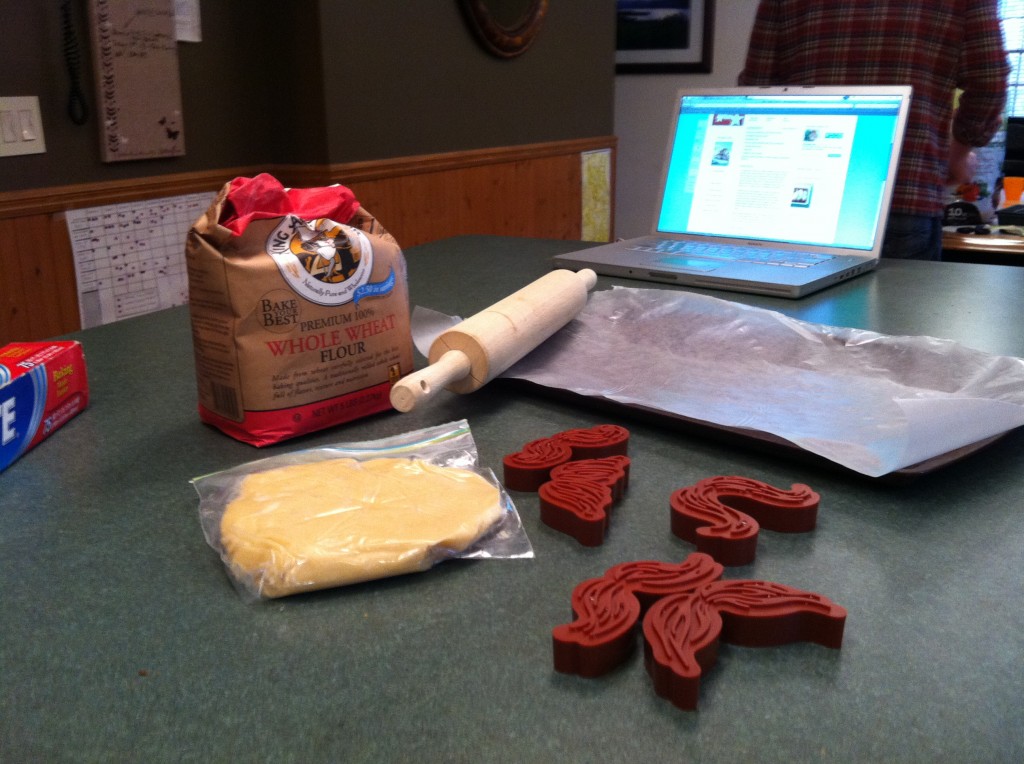 Refrigerated the dough in 3 bags, one per daughter, for the duration of 1 nap. 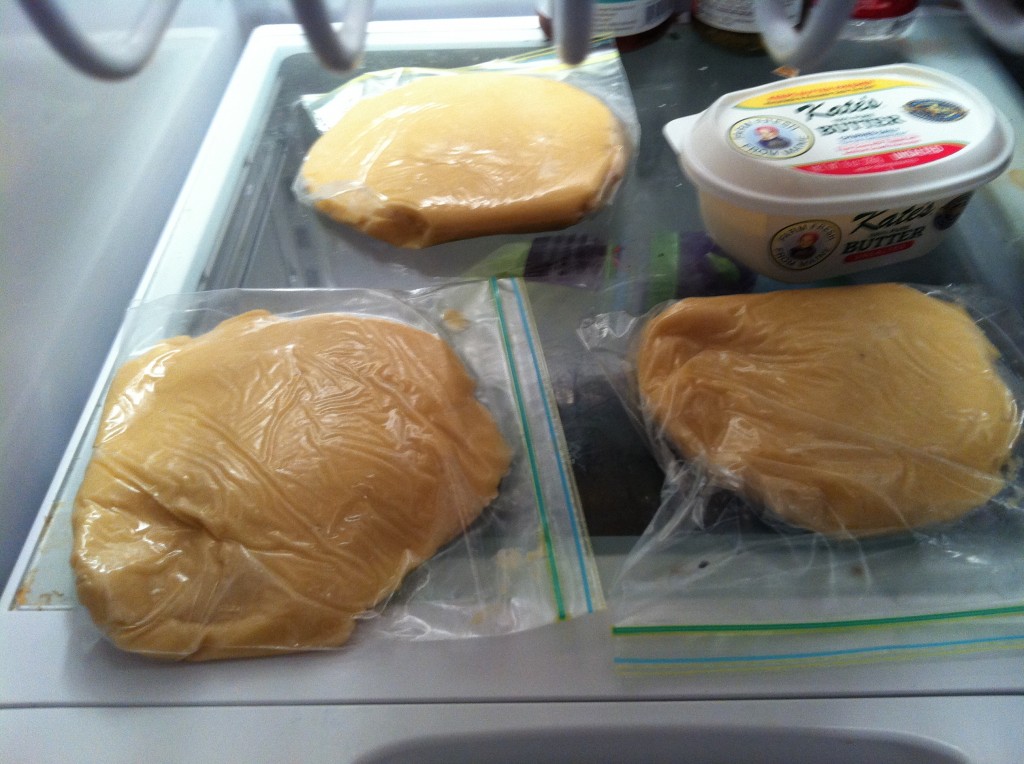 We floured the entire kitchen and me. 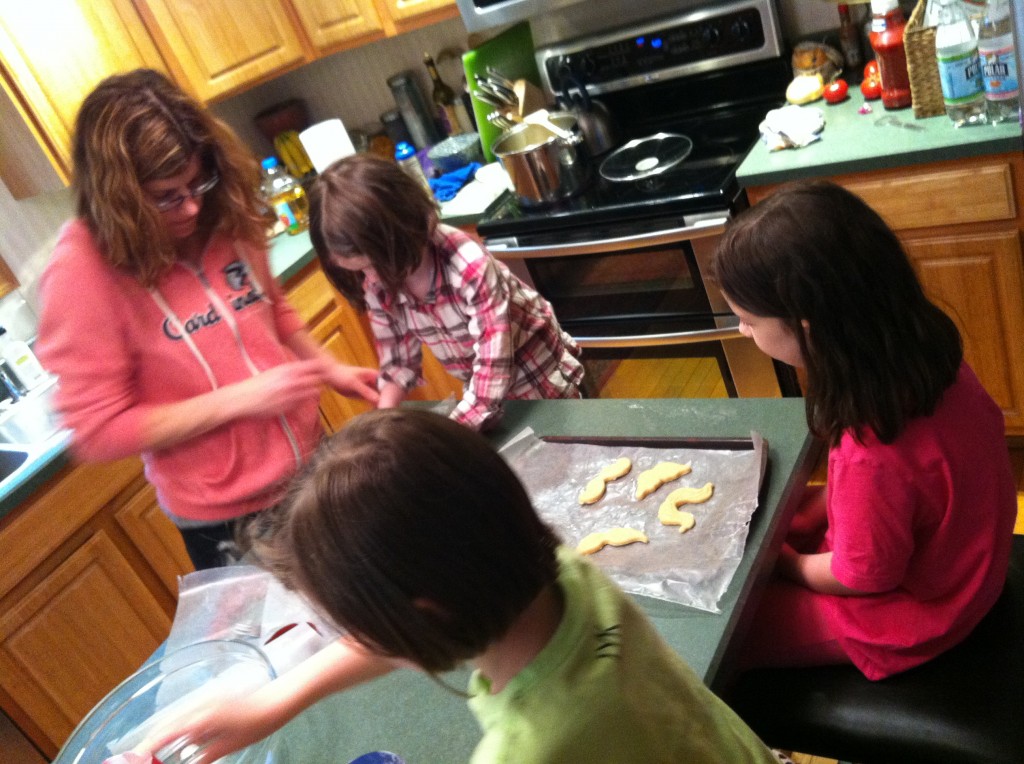 We did a Today Show fast forward to cut, baked and finally cooling cookies.
Fanciest baked good shadows ever! 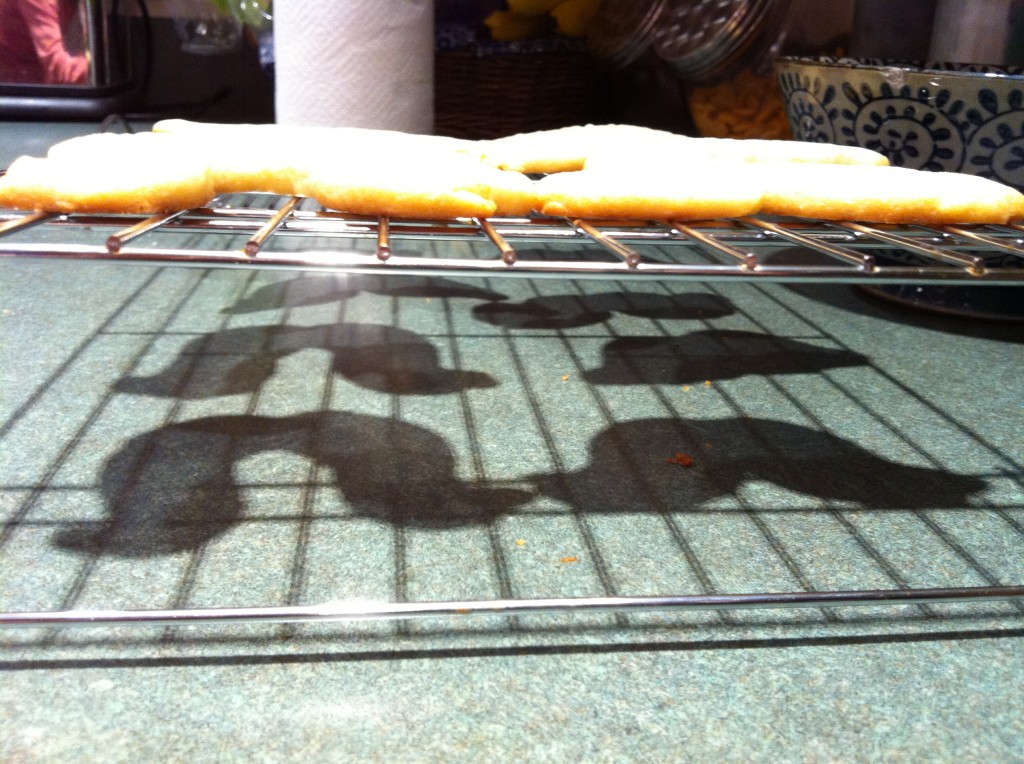 We checked them from every angle.

Demonstrated enough restraint to get an approving nod from Martha. 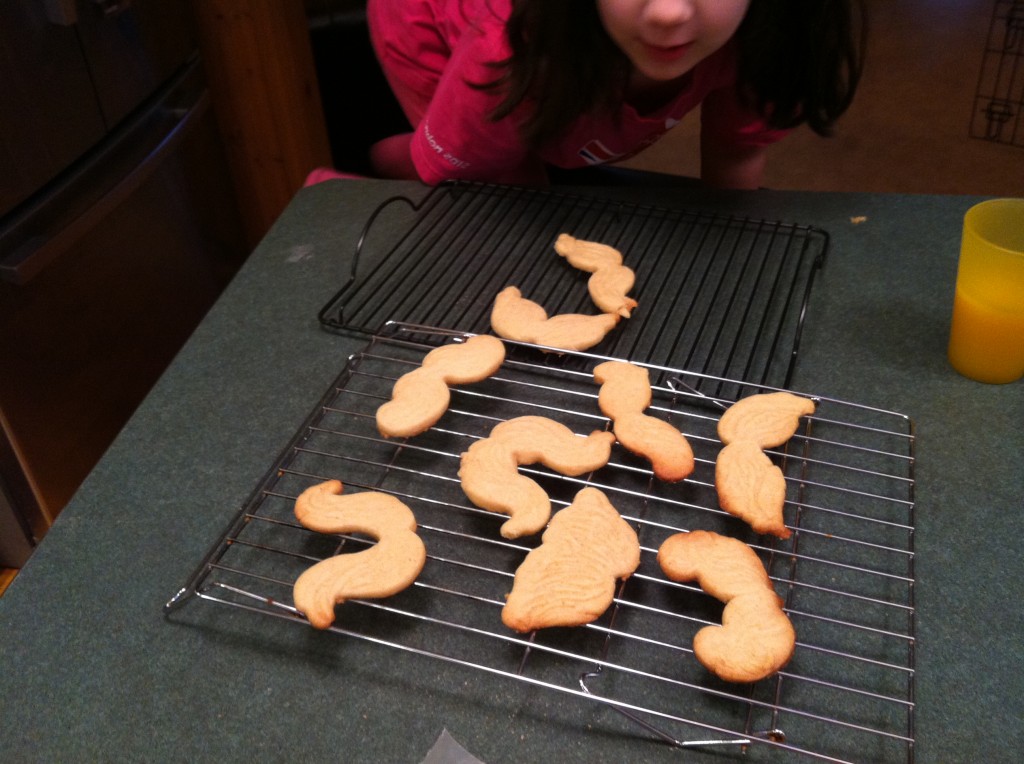 First one to the cooling rack, scowling for being caught red handed. 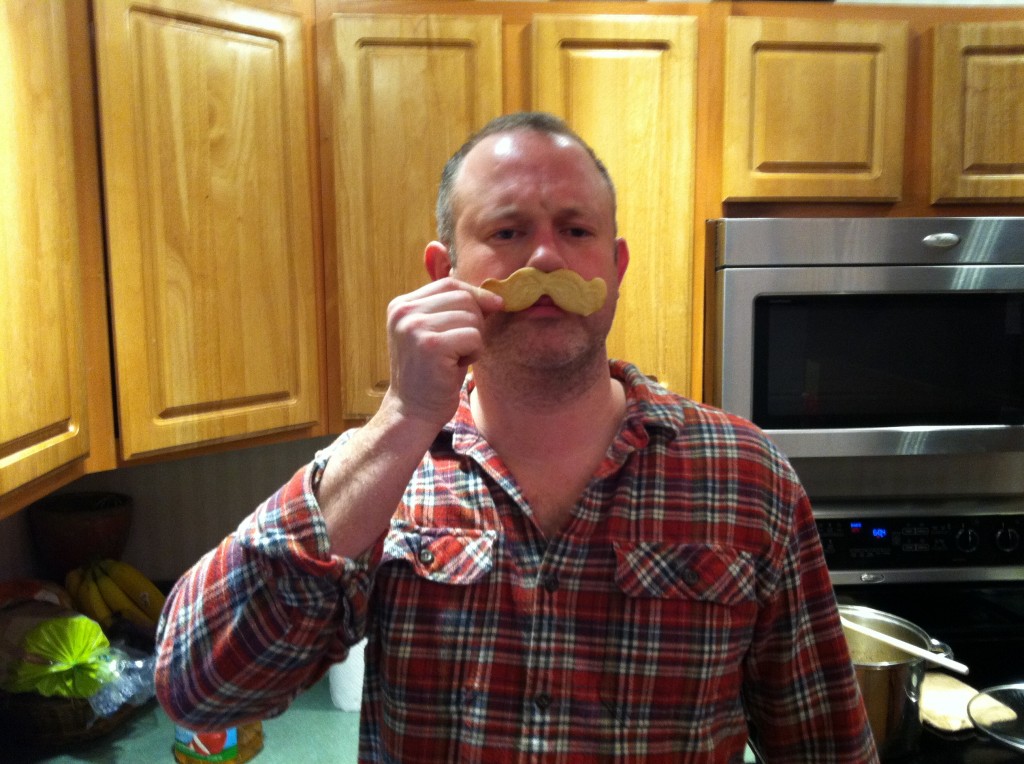 So I’m sick, unshowered and bakey?

Was hoping you’d capture it on film, Sean. 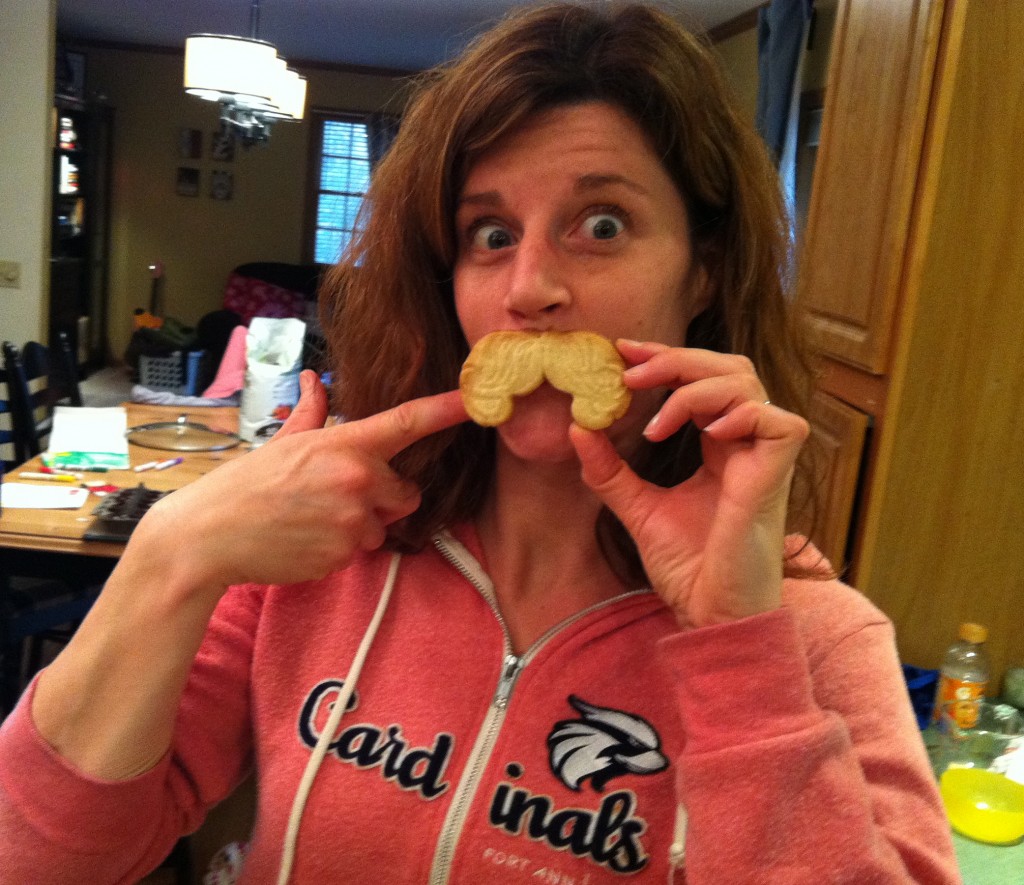 They put the sass in moustache. 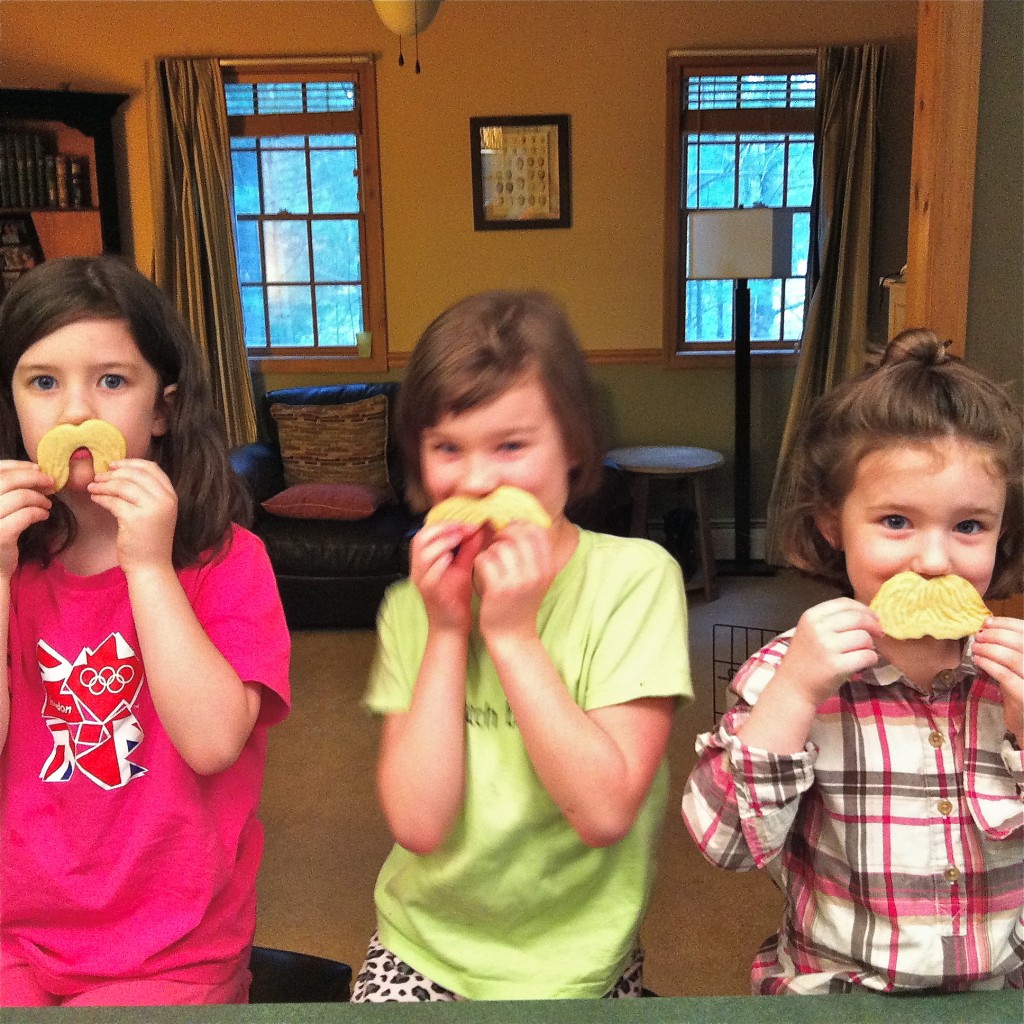 All kidding aside, this was an amazing project. The kit came with 5 cutters, so even with three kids, there was no fighting. The lined patterns on the back of each cutter meant each person always had something to do—rolling, cutting, stamping. The recipe was super easy to follow, only called for one stick of butter as opposed to others that called for 5. 5! Only 4 come in a box, who is that prepared? And they were sooooo tasty.

I cannot wait to make Magee Moustache plates for the holidays.