Did you say balls?

They were shrieking and screaming with enough laughter peppered in that I knew no one was in pain. Sean was trimming his #Movember whiskers in the bathroom and I was assessing all the magazines I have subscribed to during school magazine drives, but never actually get around to reading. I was reaching for Harper’s Bazaar when I heard the unmistakable siren of laughter that means someone said or did something very naughty.

I walked down the hall as the sounds of laughter and gasping for breath built.

I leaned in the doorway, “What did you just say?”

Briar sat ramrod straight in the bed, her hair a staticky crown, Avery slunk toward the wall, while Finley just beamed in the corner and offered, “She said balls, mom. She said that Avery hit her in her balls.”

Avery snorted and Briar flushed. “Is that what you said?” I asked.

The corners of my mouth were quivering, I couldn’t quite figure out how to hold it together. I knew I wanted Sean to be there for it. “Hey babe, can you come in here?” The girls looked at each other and began giggling. When Sean came in he looked at the girls, then at me and raised his eyebrows, “Yes?”

“Briar, do you know what balls are? Do you know what the word means when you are talking about someone’s body?” She nodded and awkwardly did a Michael Jackson swipe at her crotch.

“Ok girls, listen, balls are a part of the body,” I looked at Sean, “And only one person of all five of us in here has them. Can you tell me who?”

It was unanimous they all screamed “You” as they pointed at me. “Mom has the balls.”

At this point we were all laughing. “No, girls, dad has the balls, but you shouldn’t say that, they are called testicles.”

Sean was shaking his head. Briar again gestured to her crotch and then made a gesture on her head, “Like privates antlers?” 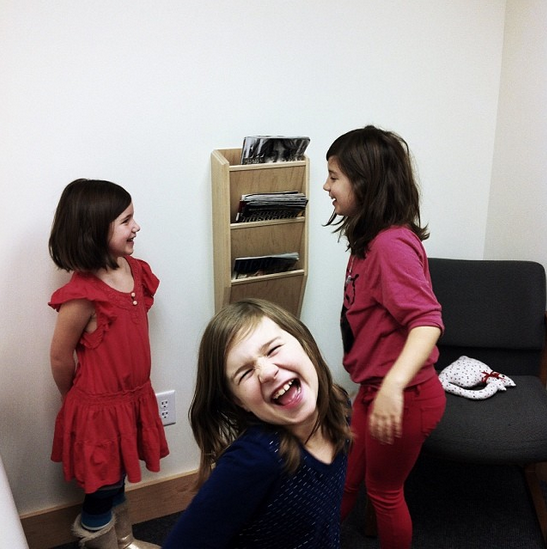 Giving thanks for my nut balls and wishing you a very Happy Thanksgiving.