I understand now how quickly time passes once we’ve built our childhood foundation of hazy summers peppered with popsicles, melted crayons, and pennies flattened on train tracks. I am drawn to those days and years that passed like lifetimes. It’s looking behind a two-way mirror—
What is it like over there where/when next year isn’t bearing down on you with ferocity?
How do you start each day without the frustration of the day before?

I want to revisit not fretting over a clock or calendar. As a mom my measure of time has come to be gauged by how long a pair of pants will last before skinny ankles peek through or pearly white belly presses at the waist, or whether I can wait to make the tacos Friday and have the cheese not mold. The dashes from one party to the next, playdates and school conference, work deadlines and another bag of forgotten greens destined for the trash bin swallow minutes that turn to days and then months. It’s unmanageable and I can’t make up my mind between fighting it or hating myself for it.

I always thought that it would be different. I imagined a tidiness to life that would have clearly defined goals and less hesitation. This imagined life didn’t have much to do with material things or titles, it had to do with me. My expectation of this ideal life came around the time that all the kids on the playground figured out attraction. The girls changed between one night’s sunset and the next day’s sunrise, carrying themselves differently. The boys changed too, it wasn’t quite as black and white, but it was still there and I was on the outside in an instant.

It was in the moment that I did not run to the bars to do penny drops that I think it happened. I stayed on the blacktop with the boys in an endless game of 500, singularly focused on the ball. The sounds of the girls giggling and their palms screeching on monkey bars were just white noise. All I knew was the blur of striped shirts and denim, the sprinting one way and then back.

I wanted the impact of the ball hurtling at me from high in the sky to land on my chest. I didn’t care that it might sting or glance off of my face, all I wanted was to have the next “Got it!” come from me. It took a while to to get it, both the ball and the new order. Disregarding the natural flow of things had consequences. Until that point I’d been oblivious about not fitting in. I’d known that my clothes were different, but it hadn’t mattered. The girl-boy thing was different and I came to understand that it was a different that wouldn’t be tolerated. It’s also when I learned that girls are not all that sugar and spice that they’d have you believe. It was the end of fifth grade.

The next year I began to hesitate. I hesitated about speaking up, stutter-stepped before walking from my locker to my next class, stammered when asked which boy I had kissed (none!). We began to be shepherded by this new way; the boys spent more time in the wood shop, the girls stayed in the Home Ec room. I mangled a spatula in a blender and made a sweatshirt so woefully misshapen that the teacher just quickly nodded; the mental tabulations of the time it would take to set me (and the neckline) straight against the number of other students just didn’t work. I didn’t want to be in the wood shop, but I couldn’t really hang with the girls. No one played 500 anymore.

Briar is rounding the corner in fourth grade, Avery is in second, and Finley is in kindergarten. I think the switch comes sooner. Briar is already drifting, away from her sisters and away from us. She is quiet when she used to talk, mellow when just a month ago she would have been hyper. A part of me wants to press, but I realize my discomfort is more the newness of her quiet than genuine worry. She holds my hand each morning as we walk to the bus, then chuckles when I whisper, “I’m so glad that you’ll still hold my hand.” Her interactions with her sisters are tender, motivated more by a nurturing instinct than a desire to play.

I wonder about these next few years.I expect in many ways time will slow as we move through a morass of disentanglement, the years of constant touching and mutual adoration giving way to leave me alone and have it your way. Just the other day Avery asked me for a ponytail, a few months ago that would have meant me finding a brush, wetting her hair, and actually pulling the hair through the band myself. This time it meant passing a rubber band to her, which she held behind her head and quietly struggled to fashion in a bumpy, but effective ponytail.

Just like that, “Thanks, mom.” Her need for me shortened from the whole process, to one tiny part that one day she’ll do on her own. I try to focus on the natural order of the parent child relationship—they are supposed to get the hang of things and move in this way that can be excruciatingly slow and then unapologetically abrupt. Laying the memories over the present, imagining the January to June leg of Finley’s kindergarten against those of Briar and Avery, I begin to fluster. Time is moving faster and I want to defy order, clinging to late night cuddles and backyard investigations, maybe even boxing out more instances of “Thanks, mom,” by doing it all. It seems impossible that I can move any faster without sacrificing something or that a desperate grab at keeping us all in an infinite game of 500 won’t have the same consequences it did the first time around, frustrated exclusion.

Even as I write this and express doubt and worry, I know what I have to do; I know that all of these moments we’re living, hectic and bittersweet as they are, will in hindsight look magnificent. My companion through it all is this tricky lump in my throat and the dawning that life never reaches the breezy plateau that I imagined. We are ever more on a playground with changing rules and shifting ground. My girls are going to have to figure things out like I did, with different twists ahead, while I make my way murmuring a different got it. 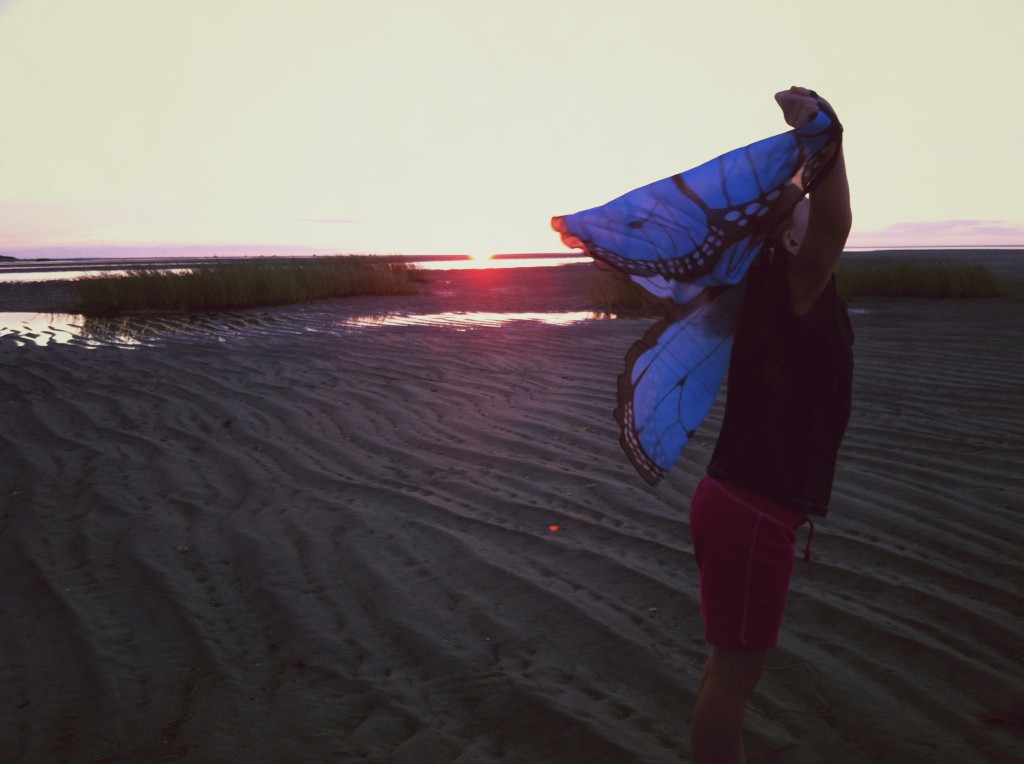 A dragon lives forever but not so little boys
Painted wings and giant rings make way for other toys.
One grey night it happened, Jackie paper came no more
And puff that mighty dragon, he ceased his fearless roar.