I was pushing the cart absentmindedly, as I meandered through the store. My head wasn’t in it, hasn’t been in a lot lately. I think in the way trouble comes in threes, sometimes distractions come in clusters. A flurry of things that dizzy me into a rut of, “This sucks” and I let them.

It wasn’t until I heard the boy shouting, “Mom, mom!” that I snapped into now. The mom turned, looking every bit as not-there as I felt.

“What?” she asked in a weary and annoyed voice.

He brandished a red and blue decorated package and held it overheard as he chirped, “Crepes!” His whole face was lit up and I wondered for a minute if the girls might like crepes.

“For what?” she asked, looking at him as if he were waving a donkey mask and matches.

“For eating!” he laughed.

She turned the cart and called back a “Not today” as she strolled over to the salad dressings without giving it another thought.

His shoulders fell and he gave a last look at the package before setting it back between the strawberries and blueberries and saying, “Not today always means never.”

Standing beneath the corrugated cardboard banana tree in the produce department I felt a thousand, “Not todays” and “Maybe next times” rain down on me.

I was the only one who heard him and I knew he was right. She’s not going to buy him crepes. I never went back and bought that divine crushed velvet blazer at Nordstrom, I haven’t taken the girls to the places they’ve wanted to go, I haven’t followed through on playdates, and I haven’t planned an overnight with Sean.

I’d bet that we all have a whole trunk of not todays—some that we meant to get to and others we never gave a second thought.

Just last night I was saying to Sean, after he confessed to feeling some pretty negative things, “It’s so reliably relentless, the best we can do is to make a promise to ourselves that we’ll look for some measure of joy in every single day.”

He sat across from me weighing my words. I knew he was trying to decide if I was being Pollyanna or if this dawning we’ve been having is true—it never slows down, things don’t ease up and allow for cushion. We have to plant our feet wide and grit our teeth and commit to leaning into the onslaught in order to be able to say, “No, not today, because today I am doing this. Today I am saying yes to this thing and no to that.”

He heard me and we sat smiling at one another, in all honesty we may have stayed like that more out of exhaustion and a strange mix of acceptance and defeat, than in a desire to really be there.

I never realized that growing up or being a parent would involve so much effort to be in control of the flow of a day, or, if I’m being honest, of my life. In certain lights I can see the scale being tipped in the direction of, “Next time” and it isn’t how I want to live. I want to be present enough to say, “No, we are never doing that” or “Well, yes, we can’t do it right now, but let’s do it next week” and when they ask me if I promise, I want to be able to say that I really do promise.

We can do that for our kids, our spouses and ourselves. We are in complete control over the next times and one days. I’ve been watching my friend Kelly accelerate “one day” into “soon” and gloriously into, “It’s happening.” The thing I have learned through Kelly is that it isn’t an it that is happening, it’s me.

Worthy of now, not next time.

I am soaring by giving myself and the people I love right now. Sometimes that means doing something death defying or exerting and other times it means renting ridiculous rideable animals from a mall kiosk because the movie was sold out and why-not? 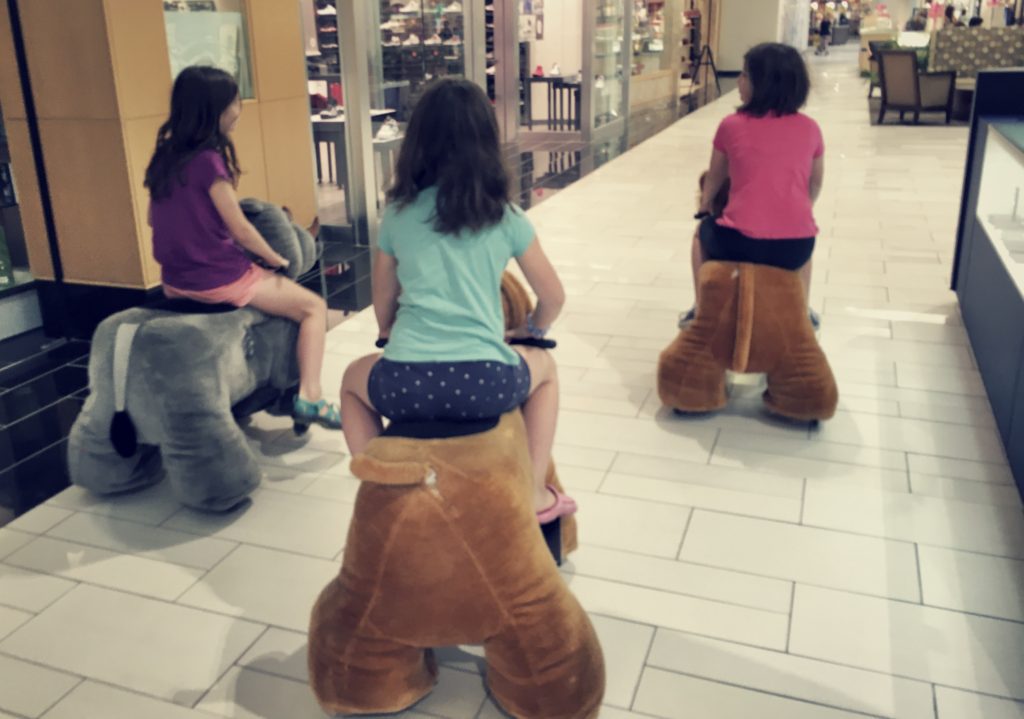 Don’t fall into the trap of next time. Say what you mean, live how you want to remember, and believe that you are in control.