The Price of #MeToo (Trigger warning)

I’ve never liked the secret FB meme approach to advocacy. Susan Niebur taught me that the playful nature of standing up for breast cancer was, in fact, a big drag on those battling it. Posting the color of your bra with no explanation is confounding for some, but worse, for the women who no longer have breasts or who don’t shop in a sea of blush colored lace it’s almost mean-spirited. Usually, I just ignored the private message invites and then moved along.

When #MeToo started* I was torn. I began seeing the stark updates:

I nodded my head, remembering the texts and DMs over the years from many of these women. We’d shared the weight of the Cosby story and how it felt to have woman after woman not believed. We revulsed in back channels over Brock Turner. We worked through why we can’t just enjoy shows like Game of Thrones, why we can’t lighten up about rape storylines.

Then the #MeToo updates started coming from people I hadn’t spoken about violence with or who hadn’t ever written about it. Soon the updates were coming with explanations of the hashtags, references to whose story they read who made them step into the light. Each one made me think of how it feels to dust off the story, unbandage old wounds. The memory of sitting in a class, on the south side of the high school, listening to a sex ed teacher say that if you are being attacked to tell the assailant you have diarrhea, but being distracted by the phantom sensation of a stranger’s pubic hair in your throat and trying to stifle the gag reflex.

It’s gotten to a point that I cannot avoid the #MeToo. It’s everywhere. We are everywhere. We always have been, but we have, for the most part, moved silently. Clutching mace by our sides as we go for jogs knowing we might get attacked. We don’t talk about that too much because society has a limit. Let it go. Move on. It was one guy. You aren’t in danger.

It’s uncomfortable to hear us. We try to laugh at the jokes, not wanting to be too loud with our discomfort. We send texts, “You ok?” and “I’m thinking about you.” Quiet thank yous get sent back and forth. We might take breaks from social media, but this particular campaign is on the news, people are talking about it.

I suppose like the white people getting woke, it’s great. I get it. Racism is real. This is shitty, let’s fix it. It’s empowering on the side of revelation, but on the other side, where the people have been enduring it day in and day out, it hurts.

You can’t say “Where have you been? Why didn’t you believe me?” And yet, where the hell have you all been? We have told you. We have begged for help. We have been bloody and raw and you’ve said, “Well, it would be tough to prove” or “If there were semen and bruising then we’d have a case.”

The thing is, for there to be victims there have to be assailants. The we of “We did this to you” is every bit as vast, but they never get brought into the light. Even now there are still defenders of Brock Turner, still, judges who have the fate of the men and boys carrying greater influence than the lifelong sentence women get. Woody Allen warns of a witch hunt and “men winking at women” getting blown out of proportion. Why can’t it be, “Hey guys, stop winking.” That isn’t even the problem, its the diminishment. The inference he makes that we are upset about winking. Why do men get to be the people who decide what is crossing the line. Winks are fine, body grazes are fine, theoretically consensual sex is fine, her no was half-hearted, it’s fine. Jeff Bridges had to clarify his comments because he couldn’t get it right the first time around. It isn’t hard, men are raping women.

Yet here we are, it’s not black and white, there are still murmurs about what the women wanted, what they wore, why they went to the hotel room. The seed of doubt is some kind of Monsanto monster seed. It grows and twists to survive any conditions and cultivate the “Yes, but…”

Do I appreciate #MeToo? Does it matter if I do? Yes, I guess I am grateful that people are speaking up, but as a friend said, she’s a #MeToo and has been for a long time, but her daughter isn’t yet. She hopes she never will be.

I have my doubts. Just last night I heard a guy regale us with a story of a buxom woman and a director who said she mustn’t wear a bra. It made no sense, but we were all supposed to chuckle. The schools are still policing what the girls wear, rather than how the boys comport themselves. It’s still about our bodies. Ads like this still run: 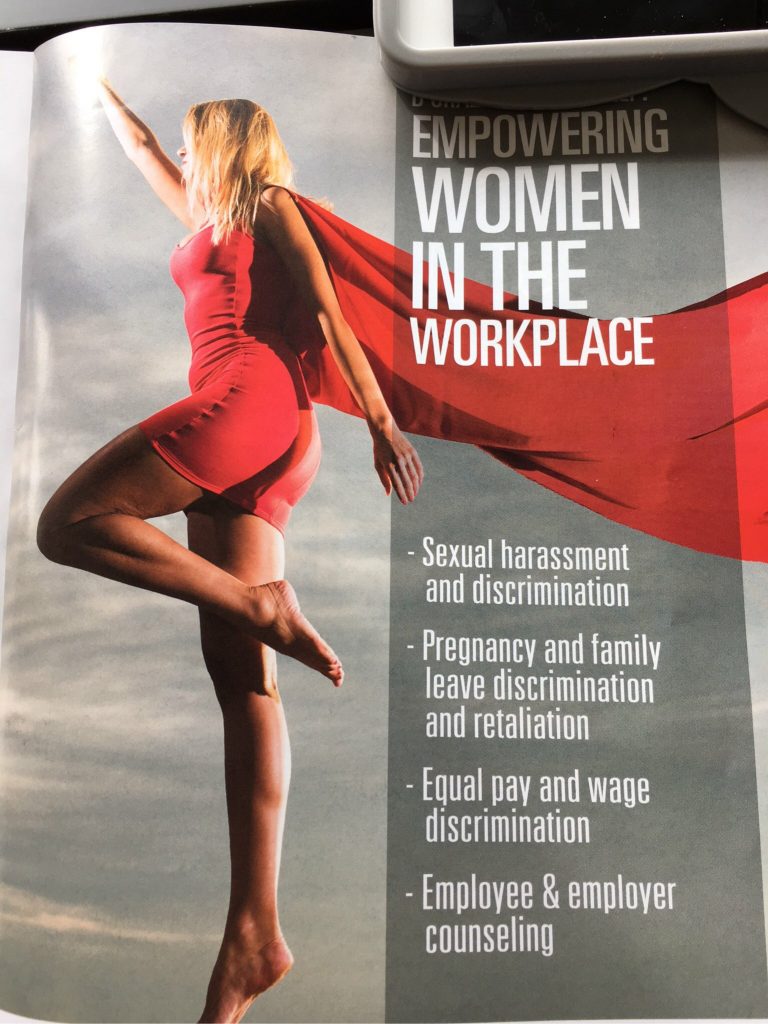 I noticed yesterday that my level of suspicion toward men is back to where it was post-assault. I’m approaching each point a to point b like a video game.

I don’t really want to think about it anymore because I’ve done my work. I’ve spoken up, I’ve boycotted shows, I stopped listening to certain artists. Any connection to rumors of abuse I have answered with a commitment to not supporting. Is the rumors thing tricky? Nope. I will give women the benefit of the doubt every time. I don’t have to like the women. I may have loved the men. I choose to be a part of the world that believes women. Even though I am bone-tired and nursing my own wounds, I won’t stop working.

#MeToo has to extend beyond all of us who belong to it. Because even though we move on and heal, it never stops being a part of us, just as the assaulting women will always be a part of the aggressors and, in all honesty, a part of the people who don’t believe us. You become another layer of the violation.

My question is what does #MeToo mean to you and will you let is fade away like all the other hashtags?

#MeToo started. It actually began ten years ago by Tarana Burke. Thank you Addye Nieves for keeping us straight.